“Human history on the edge of a revolutionary leap: Welcome Statism” 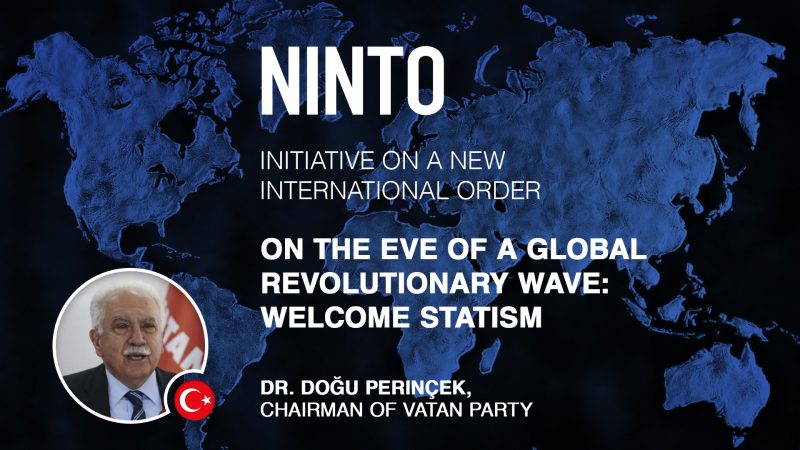 Today, we present the opening speech of Dr. Doğu Perinçek, Chairman of the Vatan Party (Turkey). The subheadings were set by UWI.

Our valuable friends from the Pacific to the Atlantic Ocean;

Dear friends, we are sharing with you the virtues of humanity,

You are all very welcome to the New International Order Symposium.

I am greeting you in the name of the Vatan Party (Turkey) with warmest feelings of friendship and respect.

A new world is being constructed. We are on the edge of the greatest revolutionary leap in human history.

This leap lies ahead, because the imperialist-capitalist system has gained a mafia-like character strangling production. Today, it is not the private profit derived from production that sits on the throne of the system. The throne is occupied by interest, rent and dollar speculation.

Capitalism was alienating humans from their labor, from themselves and from the society. It has become obvious today that the current mafia-system of imperialism has turned this alienation and isolation into a weight that humanity cannot carry anymore.

The list of problems unsolved within the system of private interest grows longer day by day: The widening gap between the rich countries of the North and poor countries of the South; the growing poverty within the countries that are part of the imperialist system; the unemployment; the moral disintegration; drugs; egoism; the collapse of social solidarity; wars; murders; the spread of crime like a disease; the deepening of inequality between men and women; alienation; pessimism; hopelessness; fatalism, the lack of patriotism…

The current system is atomizing and dissolving the society.

But as societies won’t give up to be societies, they will give up the current system.

Let us take a look at the global developments:

The US is not producing anymore. Its share in global economy has decreased from 50% to below 20%.

The US hegemony established after 1945, is collapsing.

Firstly, the Dollar Empire is crushing down.

Secondly, new armed powers have capable to balance the US’ armed power have emerged.

Yesterday’s paupers are becoming today’s wealthy, and they hold the wheel of humanity. The world economy’s weight is moving to Asia. Yesterday’s Oppressed World is becoming the Advancing World.

Let us broaden the angle and look at today from the perspective of the great, adventurous history of mankind. Then we recognize that we have arrived at the end of the Atlantic Era. We have entered the Asian Era. Africa and Latin America are the wings of the Advancing Asia.

The trouble of Coronavirus has forced humanity to face the grand truth of our times: Society will either give up the system of private interest, or it will, literally, die!

Day by day, as the world revolves around the sun and itself, we face the same question, the same choice:

Private interest or human being?

A system of exploitation that enchains production, violence and global terror or humanity?

The answer is in life itself.

We have as individuals acknowledged that we cannot live alone. And the despair of the class domination systems that turned into mafia orders is obvious.

Never in the history of earth has a system been so destructive against humanity and nature. In the core countries of capitalism, every second person visits doctors because of psychological problems. Both, the pollution of humans and nature have reached a dangerous dimension. Forests, rivers and oceans are affected from this pollution too.

Then we have to ask: is there a solution within the imperialist mafia system?

Can the system of private interest do anything more than watching how the ozone hole grows?

Which multinational enterprise, or which private initiative will shut the hole in the roof of the world?

The Covid-19 pandemic has reached global dimensions. Is there any humanist solution to it within the imperialist-capitalist system?

Even the most sophisticated intellectuals of the imperialist-capitalist world do not provide positive answers to these questions.

Now, humanity is waking up with a nightmare from the Atlantic Dream.

No one believes in scams disguised as solutions within the imperialist system anymore.

The betrayal of liberalism

Today, what the system itself is in quarantine. Presidents and Prime Ministers have been taken in quarantine, meaning, the dictatorship of finance and the liberalism have been placed under quarantine.

Yes, liberalism betrayed humanism, and now it pays the price. The sacred books tell us how Cain killed his brother Abel, both children of Adam and Eve. Liberalism and Humanism had entered the world just like them, as twins, as brothers. Now, Liberalism is doomed to hell because it tried to kill its brother Humanism. Humanity does not give up on Humanism; it abandons Liberalism.

We have entered the era where Humanism meets Statism. This is not the first time they been put together. Humanity had discovered the way to live in dignity already in the 20th Century in Satitism, that is, in state led, peoples oriented and market-limiting currents. The 20th century began with one revolution after the other, all seeking independence and Statism for people. The Turkish, Russian, Chinese, Indian revolutions and the other uprisings in the oppressed world all together had constructed a new world.

At the end of the 20th Century, a wave of neoliberal globalization was on the agenda. It attempted to eliminate the gains of national democratic and socialist revolutions, but this Dark Age did not last long. Humanity today recognizes that it cannot solve the current and severe problems within private interest, individualism and the US hegemony.

The application of the most basic law of human history is on the agenda: Humanity does not capitulate in front of problems. While facing the choice between death and life, societies have always chosen and will always choose life.

“Today, Humanism, Statism, Populism, sharing and politics that are focused on labor and production are knocking on the earth’s door.”

Today, Humanism, Statism, Populism, sharing and politics that are focused on labor and production are knocking on the earth’s door.

Today, it is the Asian Civilization that is on the rise. The Asians carry the banner of Humanism. Statism for labour has proved to be the contemporary heir of Humanism in the example of the Socialism with Chinese Characteristics. It has proven itself with the great struggle given against the Coronavirus pandemic.

As a new world is being constructed, we say “Welcome Statism”.

We welcome Statism for labour, because it raises brotherhood, selflessness, sharing, loyalty, collectivism, solidarity, love to the nation and the homeland.

At this moment in time, humanity is not at the stage of completely abolishing the capitalist private property. But the dictatorship of the finance, which strangles production, has come to its end. Time is running up for the hegemonism that not only dominates its own country but other capitalist countries as well. The globalization’s attempt to destroy the nation states has failed. On the political level, the imperialist West’s false claims of democracy are loosing all credibility. The scam of “human rights” has become obvious.

Rising tendencies in the new world

We are facing a wave of revolutions. This wave will move from Asia, Africa, and Latin America towards the core of capitalism and include different countries to varying degrees.

The rising tendencies are the following:

In summary, we are in a strong leap forwards in the “Era of National Democratic Revolutions and Opening up to Socialism”.

Today, the third big wave of revolutions is coming. And this wave bears in itself also initiatives towards socialism.

This great leap of humanity will doubtlessly not happen by itself. We, the vanguard parties, are not observers but builders of this process.

Humanity will solve existing problems with revolutions of the producing classes.

These revolutions will be national and patriotic, but they will not be enclosed within national borders. The international solidarity of the Oppressed and Advancing World is on the agenda.

We are on the eve of a new era of revolutions.

A world, where all seven continents trade roses with roses and not money, has appeared on humanity’s horizon.

We know very well about your experience and theoretical depth, therefore, we are sure that the Symposium will provide the ground for a productive discussion.

We are expecting your thoughts with great curiosity and interest.

We are embracing all of you in friendship and respect.

Chairman of the Vatan Party (Turkey)