A new world is being established! Highlights from the ‘New International Order’ Symposium 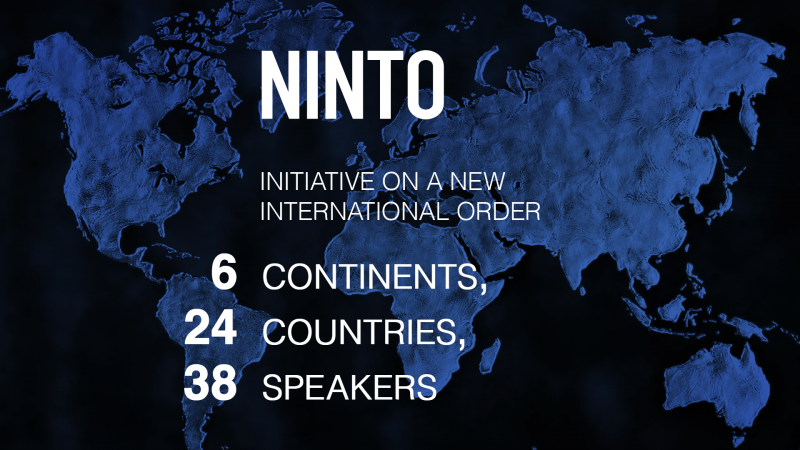 Zheng Dongchao from the International Bureau of the Central Committee of Communist Party of China; Russian expert Aleksandr Dugin, one of the prominent names of Eurasianism; Syrian Professor of International Relations Dr. Bessam Abu Abdullah; Pakistani Senator Mushahid Hussain Sayed; Rauf Denktaş’s ambassador at large Hüseyin Macit Yusuf; Abdullah Abdullah from the Palestinian National Assembly; Dr. Sadullah Zarei among others were present at the symposium. The last session of the event, which consisted of a total of five sessions, was reserved for youth speakers.

The “Asian Age” left its mark on the symposium, in which the institutions, mechanisms and foundations of the new international order were discussed. All the participants from China to Palestine, from Russia to Iran emphasized that the US hegemony collapsed and the unipolar order had no chance to win. The highlights and speeches of the symposium are as follows:

The opening speech of the conference was made by the leader of the Vatan Party, Dr. Doğu Perinçek. In his speech, Perinçek said, “A new world is being established and we are on the verge of the greatest revolutionary breakthrough in human history” and continued as follows:

“We have come to the end of the Atlantic Age in terms of the great adventure of humanity, we have entered the Asian Age. Africa and Latin America are the developing wings of Emerging Asia.

The scourge of COVID-19 suddenly confronted humanity with the great reality of our age: Society will either give up the private interest system or die!”

“Nobody believes in solution deceptions within the imperialist system anymore. It is the system itself currently in quarantine. Even presidents and prime ministers were quarantined. This incident, indeed, is the quarantine of the financial dictatorship and Liberalism.”

“We go from the dark world ruled by finance capital to the bright world of producers. This great leap forward of humanity will decidedly not happen spontaneously, we, vanguard parties, are not spectators but builders of this process. Humanity will solve its problems by the revolutions of the productive classes. These revolutions are national, but they will not be closed within national borders, the international solidarity of the Oppressed and the Emerging World is on the agenda.”

Dr. Zheng Dongchao from the International Bureau of the Central Committee of Communist Party of China emphasized this in his speech:

“Under pandemic conditions, the world is undergoing extraordinary changes and challenges. Change is essential to the advancement of human history just as it is important for us to re-establish international cooperation under pandemic conditions, how we will respond to these challenges, and how we will come together on the basis of cooperation. Today, there are great advances in industrial production, internet and artificial intelligence development across the world. We will establish global governance not with unipolar and bullying policies, but with mutual benefit and multilateralism.”

“In the war that has been going on for 10 years, the struggle of the Syrian people and the Syrian army has been very powerful. If the project against Syria were successful, the region would fall under the control of the US and the neoliberal system. Turkey and Syria also found out that they want to split the countries of the region into ethnic and religious groups in order to control resources and establish new political regimes in which they wanted to be in full control.”

“Russia’s involvement in the war in 2015 was the first sign of the New International Order. The Western media is trying to show that this is a civil war, but it is not. They are trying to show that this is a war of freedom, democracy and human rights, but it is not. When we look at the history of the USA, we see that in more than 82% of the conflicts in the world the US either is a side or behind it. The US had a hand in Latin America, Africa, Vietnam, the wars in Palestine, Yugoslavia’s division and all of incitement against Turkey. We can demolish US puppets such as Al-Qaeda and ISIS along with Russia’s increasing voice in the region, the growth of China’s Belt and Road Initiative, and China’s escalated aggressive action to protect its own interests and to participate in the international game, Iran’s role in the region is growing. This is the indicator of a new unity in the fight against US imperialism.”

“I think that Syria is a model for all struggling countries. And our dream of the New International Order is no longer a dream. We ought to work with the parties in China, Russia, Iran, Turkey and Latin America.”

‘The unipolar order has no chance of winning”

“The unipolar system, and the structure and civilization it constituted, is collapsing,” said Aleksandr Dugin, Russian strategist and Head of the International Eurasian Movement. The highlights of Dugin’s speech are as follows:

“Trump’s presidency was a manifestation of the end of the unipolar world. Biden, on the other hand, is the slave of the Atlanticist, unipolar world. There are multiple stakeholders in a multipolar world and everyone will win. In the unipolar world, peace is impossible, and America is now going to war. The unipolar world order is losing its power to strike. The unipolar order has no chance of winning. Those who advocate for a unipolar order have no chance of finding new slaves for themselves. Russia, China, Turkey, Iran, or an emerging civilization, no one will allow it. There may be differences of opinion among our governments, but we have to strengthen the option of a multipolar world. We have to do this to avoid wars. The end of unipolarity will bring balance to the world. Because the unipolar world is a true liberal dictatorship. We must unite against the common enemy, regardless of whether we are Russian, Turkish, Chinese or Iranian. We must win peace.”

‘Venezuela is also in Eurasia!’

Participating in the symposium with a presentation titled “The Geopolitics of the Bolivarian Republic of Venezuela Against the USA”, Political scientist Micaela Ovelar issued the following statements:

“My country, Venezuela, is surrounded by American bases. We advocate a united Bolivarian Latin America in a multipolar world against American imperialism. Venezuela is a Eurasian country, because Eurasia is not a geographical term. It is a multi-polar and very central world of which Latin America is a part. Venezuela is also part of a multi-polar and multi-centered world that develops by sharing.”

Pakistani senator Mushahid Hussain Sayed began his speech with “Turkey and China, are the closest allies of Pakistan”. “M. Kemal Atatürk”, Senator Sayed said, “is also our hero,” and added:

“Today, the United States is in a declining position, just as it had happened to Western Europe before. Humanity is facing economic difficulties today. Information pollution and disinformation is another important problem as well as economic difficulties. Intentional misinformation and the use of media in this direction is one of the most dangerous weapons. Western propaganda and false information poison humanity today. With this, we see that there is a war of thoughts, false information is entirely based on ideological struggle. We must respond to systematically produced fake news, collectively and by bringing the truth to the fore.”

‘The future of youth in the new era of revolution’

Youths from Turkey, Bangladesh, Palestine, Russia, the US and Argentina talked about the future of the youth and youth struggle for the decline of US hegemony at the symposium. These young people emphasized the importance of youth struggle in Oppressed Nations against US imperialism.