Enver, Jamal and Halil Pashas in the eyes of an Armenian Communist 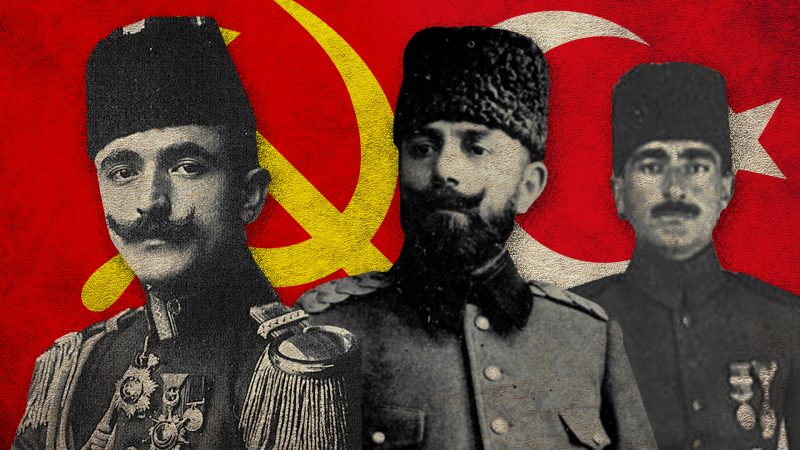 In the books that we have written and prepared for publication so far, we have revealed documents, based on many archives containing the views and testimonies on the Armenian issue from Soviet leaders and Armenian Bolsheviks who formed the center of the socialist movement of the world in the previous century. The correspondence and reports, which were marked as “top secret”, belonging to the communist leaders like Lenin, Stalin, Kirov, Karinian, Myasnikian, Borian, Lalaian reveal that what happened in 1915 was not a genocide but mutual bloodshed. According to these documents, this mutual bloodshed was incited by the imperialist states with the purpose of partitioning Anatolia among themselves. Turkey refused this plan and engaged in a war of national self-defense.

A document that we found in the archive of the Ministry of Foreign Affairs of Russia (The Foreign Policy Archive of the Russian Federation (AVPRF) is remarkable in this sense. The document is a letter containing the views of an Armenian communist about Enver, Jamal and Halil Pashas.

Gessirian, an Armenian communist, wrote his letter in French to the Soviet Deputy People’s Commissar for Foreign Affairs (Minister) L. M. Karahan, who was of Armenian origin himself. The letter is dated March 1, 1921 and was written in Moscow. It is now kept in the archive with its Russian translation along with the original French handwriting. (AVPRF f. 132, op. 4, p. 5, d. 8, l. 52, 52 ob., 53, 53 ob.)

Gessirian is not familiar with the terminology of the Soviet State. In the letter, Lenin is mentioned as the “head of state” and Karahan is addressed as “secretary of foreign affairs”. However, Lenin is not the head of the state, but the head of the Communist Party and the head of the People’s Commissars’ Council. Karahan is the People’s Deputy Commissioner for Foreign Affairs. In addition, we can see places where words have been replaced in the official letters by the word “comrade” during the Soviet period. The fact that he wrote his letter in French, ie: that he does not know Russian and is unfamiliar with the Soviet terminology, shows that Gessirian is definitely not an Armenian from Russia or Armenia.

Another important thing we learned from the content of this letter is that Gessirian had spent time with Enver, Jamal and Halil Pashas who were in Moscow at that time. This gives the impression that he is a Turkish Armenian. The fact that he had come from Istanbul also supports this assumption. The last point that we will draw attention to before moving on to the letter’s contents is that the Moscow negotiations between the Ankara government and Soviet Russia started at the time of the letter’s writing. The Moscow agreement, the 100th anniversary of which was celebrated recently, was signed 15 days after this letter was written, and L. M. Karahan took part in the Soviet delegation during the Moscow Conference.

“Enver Pasha sacrificed himself for his country”

It is clear from the first few lines of this letter written in an intimate and quite informal language that Gessirian had conveyed another letter to Lenin six months prior through Karahan. In that letter he had mentioned the possibility of establishment of a Communist regime in Turkey. Gessirian states that the views that he wrote in his first letter, upon his arrival to Moscow from Istanbul, were wrong and that he had changed his mind upon his consultations with the many competent people in Moscow. Then he explains the corrected version of his findings in six articles.

In the first article, Gessirian specifies that acceptance of communism in Turkey would be possible only upon the Turks’ initiative and the people reaching that level of maturity. This, of course, requires time. He added that high level officials such as Mustafa Kemal and Bekir Sami were justified in not hurrying to establish a socialist government. Had the Turks rushed into it, an environment of anarchy would arise in the country.

In the second article, Gessirian draws attention to the fact that entry of the Russian Army into Turkish lands even with the intention of aid would be met negatively by the Turkish people. The army to kick the Entente Powers out of Turkey should be composed of Turks, in the event it is not possible to form an army consisting of Turks and Muslims, it should be under the command of Turkish officers.

After correcting his previous statements in this way, Gessirian wrote the following lines as an Armenian, about Enver Pasha:

“Enver Pasha is a sincere friend of Russia. The welfare of his homeland is his unique ideal. He has a lot of influence on the Muslim peoples of Asia, and Russia could benefit from his help in this regard. Enver Pasha sacrificed himself for his homeland in Romania, the African deserts, Tripoli, Russia and many other places. The Kemal Pasha Cabinet owes its achievements to Enver Pasha’s help and influence. History will write the name of this great patriot with glory.”

My sympathy to the Turks has increased

“4) Halil Pasha, whom I got to know closely only recently, is quite a liberal person. He is highly intelligent and has a good and clean heart. He is literally a gentleman. His ideal too is the happiness and welfare of his homeland.

“5) Jamal Pasha, who is a comrade-in-arms of Enver Pasha is a brave and kind hearted general and he too is a great patriot.”

After these statements, Gessirian expresses his feelings towards the Turks as follows:

“I had expressed the sympathy I felt towards the Turkish people, six months ago. I am Armenian and my people are enemies of Turks. However, my sympathy for this nation increased even more, after I had the opportunity to compare them with other peoples.”

Gessirian concludes this sincere letter of his with the following words:

“I wanted to write this letter to you before, but I was embarrassed and did not want to get involved in an issue that I had not mastered. My conscience did not leave me alone, so I decided to write you this letter. I would like you to inform the esteemed head of state on this matter, when it becomes possible. Signature: Gessirian. Moscow, March 1, 1921”

One response to “Enver, Jamal and Halil Pashas in the eyes of an Armenian Communist”