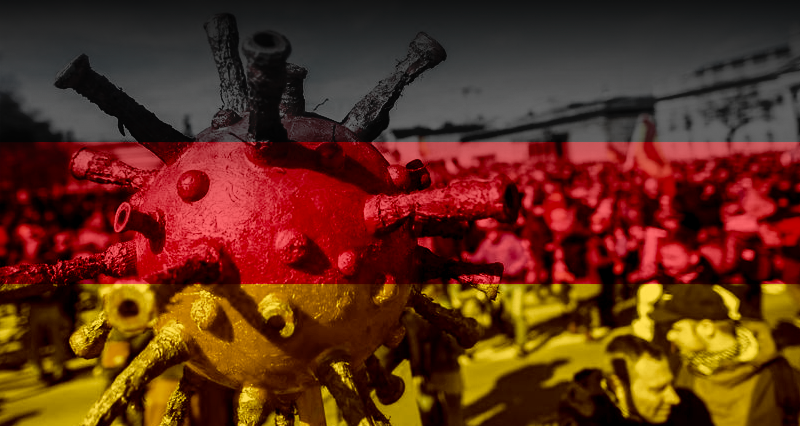 Germany is in the middle of the third wave of the pandemic. This week, the Robert Koch Institute reported 133’162 COVID related cases for the last 7 days, a drastic increase.[i] The medics alert that the hospital capacity would reach its limit. Although the development of the vaccine succeeded in December, the government had failed to secure enough vaccine for financial reasons. The vaccine scarcity is the main reason why the vaccination campaign is progressing at a snail’s pace.

In Germany, 19.2 million doses have been vaccinated, and only 6.2% of the population have been vaccinated completely. By comparison, the corresponding figures are 192 million/22.9% in the United States and 40.1 million/11.8% in the United Kingdom.[ii] Both the US and the UK had a particularly catastrophic coronamanagement for a long time. Now Germany is far behind these countries.

While countries in Asia already achieved a high degree of normalization of life last year through the effective use of digital applications and an extensive testing strategy, Germany is still barely able to do so. The “Corona App” developed last year is little used. The main reason is that there is no obligation and no real incentive to do so. The use is voluntary and citizens have no advantages  whatsoever through the use. Corona tests were hardly available for a long time. The situation here has improved somewhat, but not so that a relevant normalization could be achieved via testing.

Shops, small and medium-sized enterprises are in an existential crisis. Many have already gone bankrupt and it is foreseeable that many will not survive the pandemic. While shop owners, small and medium-sized enterprises do not have an effective political lobby and are insufficiently supported because of bureaucratic conditionalities and insufficient funds, large corporations receive billions in aid. At the same time, these corporations are sitting on billions of cash reserves and paying their shareholders billions in dividends. The DAX 30 companies, listing the 30 biggest corporations of the Frankfurt Stock Market, are hoarding a total of 363 billion Euros.[iii]These companies paid 34,3 billion Euros in dividends to their shareholders in 2021, which has not changed compared to 2020 and is close to the record year of 2019.[iv]

Adopting successive lockdown measures is the only policy of a government, which is unable to effectively combat the pandemic and unwilling to support small businesses and firms. Critics talk about “permanent lockdown.” Since  2 November 2020, the country has been largely in lockdown, yet the fight against the pandemic is extremely inadequate.

Austerity, monopoly capital and the dissolution of Politics

The cacophony and the lack of strategy in the fight against pandemics is essentially due to two causes: neoliberalism and political fragmentation.

The neoliberal transformation of the last 30 years has severely affected the capacity of solving major national challenges such as that of a global pandemic. Hospitals were closed, staff was fired, in the countryside there are too little, in the city too many doctors, the care for the sick and elderly were privatized.

These structures are not designed to serve public health, but to save tax money and make maximum private profits possible. This applies not only to the public health. Leaving infrastructure policy to the private sector resulted in a poorly developed digital infrastructure, which is in itself an obstacle to cope with the pandemic effectively. Similar examples could be continued endlessly.

Neoliberal structural transformation has also led to a radical qualitative change of the political class, regardless of parties and their self marketing as “left” or center. Politics reacts much less to social mismanagement and at demands of the population and operates much stronger than in the pre-neoliberal phase as an agent of Big Business. The population is appeased with cheap rhetoric, window dressing and propaganda. The cancellation of 6000 intensive care beds in the summer of 2020 for budgetary reasons, although it was foreseeable that the Corona numbers will rise again, is exemplary for this kind of policy. Popular demands and democracy are obsolete while politics serves the interests of monopoly capital and not of the populace.

The capacity for collective action, in addition to the political will in this regard, also presupposes a functioning central authority. In Germany, the pandemic measures must be constantly negotiated between 16 federal states and the central government. Each actor pursues his own interests and follows a different agenda, again across party boundaries. At the same time, the country’s most important democratic institution, namely the Bundestag, is being bypassed constantly.

Federalism is not the only reason for political fragmentation. The neoliberal phase has led to a massive decline of the large popular parties and has generated a diversity of parliamentarily represented parties with a significant share of votes, which is not exactly conducive to a common political strategy formation.

But in addition to 16 federal states and an increasingly complicated political constellation, there is also severe political fragmentation within the parties. Each of these parties is characterized by internal wing fights (corresponding to different lobbies) and an intense rivalry for the party leadership. Exemplary is the co-ruling CDU/CSU government party: Armin Laschet is head of the CDU, but his party friend from Bavaria, Markus Söder also wants to become Germany’s next chancellor. A visible power struggle is raging within the party union. Under these circumstances, not even the CDU/CSU itself pursues a uniform or coherent pandemic strategy, but leaders try to stage themselves over the pandemic.

Among the population, the call for a common pandemic strategy is growing louder and federalism is increasingly being challenged. In this context, Angela Merkel is trying to implement an infection protection law that gives the central government more competence in health protection.

Neoliberalism and political fragmentation stand in the way of an effective pandemic strategy and thus Corona exposes the fundamental weaknesses of a political system in the service of monopoly capital.