A glance at Egypt: Turkey-Egypt reconciliation is matter of time 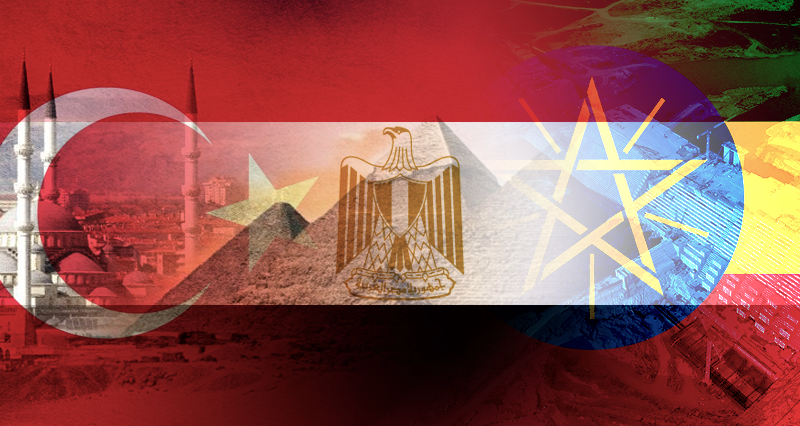 Egypt’s Foreign Minister lauded recent statements made by Turkey, saying they show Ankara’s interest in moving to a phase of political openness, which he hopes will lead to further positive action.

During a telephone interview with the “Cairo Talk” TV program, Sameh Shoukry described Turkey’s suspension of the Muslim Brotherhood’s channels broadcasting from its territories as a “positive development.”

“If Turkey suspending hostile channels was documented and stable, it means that it takes into account the rules of international law by not interfering in the internal affairs of other countries,” Shoukry said on April 11.

The possibility of an imminent reconciliation is no longer up for debate, despite the news circulated by Gulf news outlets about suspending the talks based on Egypt’s desire due to Turkey’s stall – the question now is when and on what grounds?

On April 10, the pro-government Egyptian TV anchor Amr Adib refuted Saudi allegations of Cairo’s suspension of negotiations with Turkey until their demands are implemented quickly. The Saudi news website “Alarabiya” attributed the claims to unidentified sources from Cairo, who said that Turkey’s slowdown in withdrawing mercenaries from Libya has so far caused a breakdown in talks with Egypt.

“This news is not so accurate,” Adib said during his daily show on the Saudi channel “MBC Masr,” explaining that Egypt is a reasonable state that would not demand such conditions and expect execution within 4-5 weeks.

“A request such as withdrawing the Turkish troops from Libya is not an easy task to be implemented in a matter of days, especially since the negotiations are led by military and intelligence personnels” Adib added.

The Egyptian government has not commented on the suspension allegations.

Cairo has repeatedly declared its conditions for establishing serious negotiations on normalizing the 8-year strained relations, including abandoning the Muslim Brotherhood’s project in the region (and Egypt particularly), withdrawing its mercenaries from the Libyan soil and shutting down the TV channels directed to criticizing the regime of President Abdel Fatah Al Sisi.

Meanwhile, Egyptian opposition TV anchors broadcasting from Istanbul announced on April 10 that they will suspend their activities and leave Turkey, asserting that their decision is personal and not based on a request from the Turkish government, however, Reuters reported that Ankara has asked the Muslim Brotherhood channels to moderate criticism of Cairo.

Turkey also offered to help Egypt resolve a blockage on the Suez Canal.

Another strong sign of the smooth negotiation process was on April 10, where the Egyptian foreign minister received a phone call from his Turkish counterpart, their first direct contact since Ankara’s approach, according to Reuters.

“Our Minister Mr Mevlut Cavusoglu spoke with Egypt’s Foreign Minister Sameh Shoukry with the aim of reciprocally celebrating the month of Ramadan,” the ministry said, giving no further details.

“I would like to thank Turkish President Recep Tayyip Erdogan for the efforts made by his country during its presidency of our organization, and also I would like to congratulate the Prime Minister of the Republic of Bangladesh, Sheikh Hasina Wajid, for assuming her country’s presidency of the organization, and I wish Bangladesh success during her presidency of the organization,” Madbouly said during his speech delivered on behalf of President Al Sisi during the 10th summit of the D-8. Despite its being a protocol speech, it was celebrated by the Turkish media as a lenient tone by the Egyptian Prime Minister.

The Egyptian media also adopted a softer tone towards Turkey. The former parliamentarian and the columnist Amr Elshobaky described the negotiations on normalizing the relations with Turkey as a “positive matter,” as long as there is a clear roadmap that paves the way for a new relationship based on respecting the sovereignty of each country.

“There is no hostility between the two peoples whatsoever, on the contrary, there is a common and deep cultural and civilizational heritage between them,” Elshobaky said in his weekly column at Almasry Alyoum on March 15, calling for a reconciliation based on the mutual interest between the two countries.

Is there an imminent war on Nile banks?

The feud over the Ethiopian dam has reached its hottest point, with President Abdel Fatah Al Sisi’s threat to the African country for the first time a decade-long dispute, as Ethiopia prepares for the second filling on the issue in July.

“No one can take a drop of water from Egypt,” Al Sisi said on March 30 during his visit to the Suez Canal following the liberation of the stranded ship “Ever Given”. He signaled that his country does not prefer the military solution, but that this does not mean it will not use one if pushed.

“If it happens, there will be inconceivable instability in the region that no one could imagine,” the president said, stressing that his message is “not a threat,” but there will be action if the country’s share of water from the Nile is jeopardized, which may destabilize the whole region if it took place.

“Our dialogue has always been rational and patient,” he told the reporters, stressing that Egypt “is not threatening anyone and has not threatened anyone.”

After the failure of the African Union-sponsored talks held in the Congolese capital of Kinshasa, Al Sisi repeated his warning.

“I tell our Ethiopian brothers: we should not reach the level that you mess with a water drop in Egypt, because all options are open,” Sisi said during the inauguration of the secured and smart documents complex on April 7, urging Ethiopia to cooperate with Egypt on the water file.

Ever since, visits between military and intelligence officials from Egypt and Sudan have not stopped, while the two countries’ armed forces conducted a five-day military exercise at Merowe air base in northern Sudan on April 5 dubbed “Nile Eagles 2”.

Arab countries rushed into supporting Egypt in its battle against Ethiopia, backing any choice Egypt would make to protect its water security.

Egyptian columnist and journalist Emad Eddin Hussein proposed in his article that Egypt should coordinate with all the African continent, the US and Sudan to push the United Nation Security Council to make a decision to solve the dispute between the three African countries.

“Ethiopia should be notified that unilateral filling of the dam is considered a war declaration on Egypt, therefore, Egypt will consider the GERD construction location as a military operations zone, every person in it will be treated as a military target,” Hussein wrote in his weekly column at Shrouk newspaper.

“The excessive cost of a military strike will make it the last resort after the failure of all the peaceful solutions,” an Egyptian politician and analyst, who requested to remain unidentified, told UWI. They also remarked that Cairo will not strike the dam because of the disastrous impact such an action would have on Sudan, but also stated that it would occupy the construction location at Benishangul in cooperation with Sudan.

“Transportation of the weapons and equipment to the south, jet fighters’ fueling and deployment are all obstacles that will make President Al Sisi think twice before taking military action. He [Al Sisi] even hinted this fact in his speech on April 7. The emerging economy of Egypt would suffer a lot from such a decision,” the source explained.

Ethiopia denied any negative impact of the dam on Egypt and Sudan’s share of the Nile, accusing the Nile basin countries of “politicizing” the cause. They argue it is a pure technical issue, and have responded to Egypt and Sudan’s threats saying: “All options are on the table.”