“Moscow Treaty of 1921 still lightens up the road ahead” 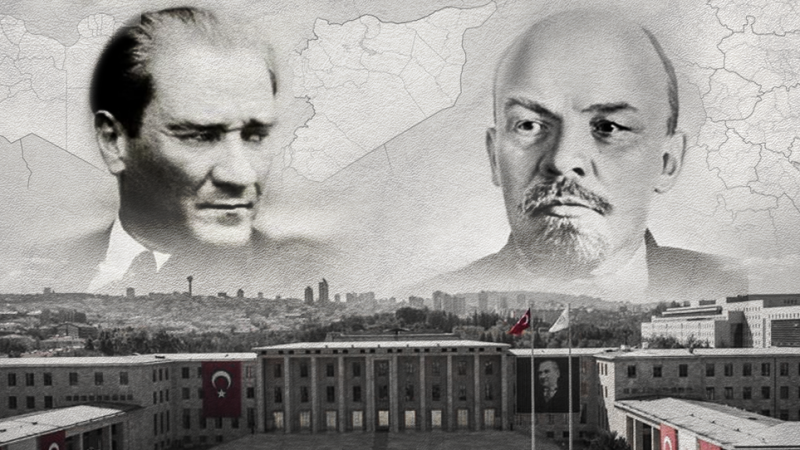 The Turkish Parliament commemorated the centennial anniversary of the Moscow Treaty, which was signed with the Soviet Union on March 16, 1921. United World International expert Dr. Mehmet Perinçek has made a presentation in the parliament’s commemoration panel on the history of Turkish-Russian relations.

How would you summarize the history of Turkish-Russian relations?

When we examine the history of Turkish-Russian relations, we encounter an iron law. Whenever Turkey and Russia go into war with each other, both countries lose. Western states are the only ones that came out victorious out of these wars. Western countries find fertile ground to pursue their plans when they force Turkey and Russia into war with each other. They impeded a potential Turkish-Russian alliance, while fighting each other weakened both Russia and Turkey. This in turn provided the conditions, on which Western countries have pursued their projects in the region.

“The whole region’s peace and stability depends on Turkish-Russian cooperation; that was first displayed in times of Mustafa Kemal and Lenin”

But this iron law has a positive side, too. Whenever Russia and Turkey cooperate, they find much easier ways to realize their national interests. Additionally, such a cooperation creates a positive atmosphere for the whole region, because the welfare, peace and stability of the whole region depends on Turkish-Russian cooperation. The period of Mustafa Kemal and Lenin was the first time that the positive side of this iron law was displayed.

“In World War I, the South Caucasus did not become a home for Russia nor for Turkey”

What was the process that led to the signing of the Moscow Treaty?

We can say that the first step to the Moscow Treaty was taken in the South Caucasus. In World War I, Russia and Turkey fought against each other, and as indicated by the iron law mentioned above, both sides lıst soldiers. There was a competition in the South Caucasus, and it became no home for Russia nor for Turkey. Following the war, Western imperialist powers established themselves there and founded local, collaborating powers. Mustafa Kemal has labeled these pro-imperialist local governments as “the Caucasus Wall”. He uses this expression a lot of times in his letters he sent to his commanders in January 1920. He stated: “If we do not succeed to establish a border jointly with the Bolsheviks, with the Soviet Union, and thus eliminate the Caucasus Wall, than we will be destroyed and our War of Liberation cannot not be victorious.”

“Mustafa Kemal proposed Lenin to crush down the Caucasus Wall”

Immediately afterwards, the Turkish national parliament was inaugurated in April 1920. On just the third working day of the new parliament, and in fact as its first foreign policy act, Mustafa Kemal sent a letter to Lenin, proposing the joint elimination of the Caucasus Wall. He proposed the establishment of Soviet power in Azerbaijan and Georgia, and he suggested that the Turkish Army and the Red Army fight together against the pro-imperialist Dashnak Government in Armenia, crush it and establish a Soviet Government there too. The Soviets accepted this proposal, because the British controlled the Caucasus Wall, which thus constituted a threat not only to Turkey but to Russia as well. The survival of the October Revolution depended on an important degree on the crushing of this wall.

“The Soviet Government in Azerbaijan enabled the Moscow-Baku-Ankara axis”

How did the cooperation start concretely?

The first cooperation occurred in Azerbaijan. Halil Pasha and his friends had just escaped prison and arrived at the Congress of Sivas, a milestone on the Turkish War of Liberation. Mustafa Kemal then sent them first to Soviet Russia and then to Azerbaijan.

While working in Baku, they have frequent correspondence with Kazım Karabekir Pasha and follow his orders. The Turkish officers and Halil Pasha’s team work together with the Soviets, while the Musavat Government takes a stance closer to the British in expectation of their recognition, and thus hesitates in supporting Ankara. As Kazım Karabekir Pasha states, the Musavat Government is fully indifferent to the Turkish War of Liberation.

Then, the Russian Bolsheviks, the Azerbaijani Bolsheviks and the Turkish nationalists crush down the Musavat Government and establish a Soviet Government, which in turn opened the way for cooperation between Moscow and Ankara on the axis of Baku.

“The two countries insist on cooperation, and the Caucasus Wall is crushed down”

The second target of this cooperation was the Dashnak Government in Armenia. The Dashnaks fulfilled completely the role of a Western and British base, established against Turkey on the one side and the October Revolution and Bolshevik government on the other. The Turkish Army and the 11th Red Army stationed in Baku pursued joint operations then. Turkey pressured from the south, the Red Army from the north, and thus they both heckle the Dashnaks. On that way, another pro-British government was eliminated.

Afterwards, this cooperation is again on display in the struggle against the Menshevik Government in Georgia, and both countries continue to work together in spite of some disagreements over Batumi. Here again the calm position of both side’s leaders play an important role. Thus, the last bastion of the British in the Caucasus, the Port of Batumi, is also liberated. And the Caucasus Wall crushed.

“The two countries face similar conditions as in the 1920s”

Are there any lessons to be drawn from history today?

Today’s conditions resemble those of 1921, when the Moscow Treat was signed. Both nations live under similar circumstances. And both, Russia and Turkey face the similar threats again. Once again, the Western camp surrounds Turkey, as well Russia. If we face similar threats, then we face similar necessities too. Moscow and Ankara must cooperate today if they want to defend their countries and care for the region’s stability. This is inevitable.

Turkey and Russia must find a common language starting from Syria and reaching over the South Caucasus, the Black Sea, and the Mediterranean Sea until Libya. They need to speak with a joint voice in all these regions. Just as there was a Caucasus Wall 1919 – 1921, today the West intends to establish a similar entity via the PKK/PYD in the North of Syria. There is no difference between the Caucasus Wall and the PKK-Corridor. Additionally, reactionary terror is on Syria’s agenda too, which s again threatening both Russia and Turkey. As an answer, we have the ongoing Astana Process. The Moscow Treaty from 100 years ago should not be seen today solely as a historical document.  Today, we need the same strategic clearness, decisiveness and cooperation that is embodied in the Moscow Treaty, to lighten up the road ahead.