The Western Dream: Turn Putin and Xi Jinping into Gorbachev! 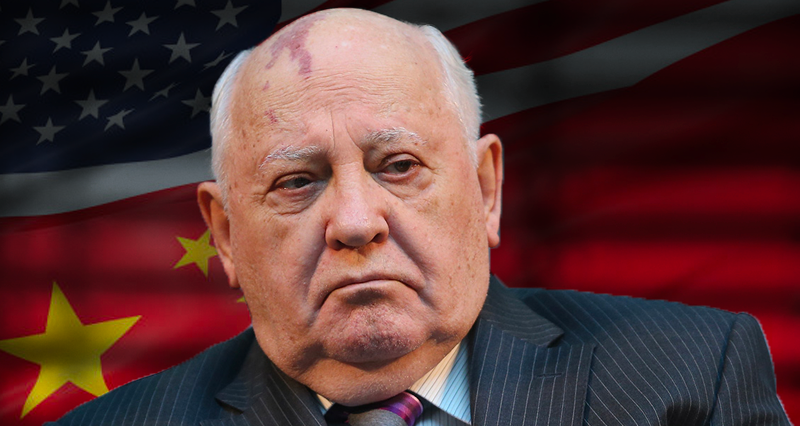 The Corona virus has also undertaken the task of pulling the future into today. What was to happen in the next twenty years takes places in this past year. This includes topics such as the use of Artificial Intelligence in daily life, working from home, distance education and online shopping, each of which should be the subject of a separate examination.

But in these new times that started with the claim that Corona started in Wuhan, China, we clearly see that a new Cold War period has just began. The West, and especially the United States, which won the first cold war by destroying the huge Soviet Union thanks to Mikhail Gorbachev, has now introduced the same cold war tactics and is fighting with all given instruments for success in this Cold War II.

In this new cold war, just like the previous one, it is clear that there are only 3 options: either the US will retain its worldwide dominance as before, or the People’s Republic of China will overthrow the USA and become the ruler of the new world, or a hot war awaits the world.

The US’ option: get smaller and survive, or keep expansion and be destroyed?

Theoretically, these three options are of course on paper. But both the figures of the economy and the balance of power in the world, make the first and last of these three options impossible. However the US, at all costs, seems to insist on not relinguishing the number one position that provides it with its current domination in the world. This is clearly obvious also in the fight for the balance of power in the US, as we witnessed in the final election fight between the supporters of “if we retreat from the world dominance, which Trump represents, at least protect ourselves by shrinking” and the supporters of “staying number one at all costs” represented by Biden and neo-Cons.

We can assume that the first round of this fight was won by the “Globalization imperialists”. The attacks, demonstrations and explosions in the most problematic centers of the world, have already been a very clear statement of what this neo-Con team is preparing for the future, even before the presidential inaguaration ceremonies of Biden on January 20th. For example, the alleged leader of the opposition in Russia was sent to Moscow by haste, even though it was sure he was going to go to jail, and it was attempted to create a popular movement there. The bombs exploded again after a long time in Baghdad and 30 people were killed. Using issues of the Uighur minority in Western China, these neo-Cons suddenly “turned into” super-humanistst. These are some very worrisome expressions of war-mongering circles in the USA and in Europe.

Turkey main target of these plans?

In fact, Turkey is one of the most dangerous fronts for the US in this current cold war creation efforts.  Recently, using the student protests against the appointment of a AKP affiliated proffesor as the President for the Bogazici University, an artificial political agenda was created in the entire Turkey, attempting to start a people’s revolt agains the government and create unstability, we think. If we take into account the political strife in the past, even the smallest opportunity the United States will be able create, Turkey will be squeezed into the political corner where the USA can impose their agendas upon the Turkish government easily, as they have done in the past upon many different governments. Therefore, every political move, even in a simple speech or an interview should be taken very carefully into account by Turkish authorities. The Biden Administration has obviously already decided to start a Second Cold War. Therefore, the US and the Europeans use every opportunity and every kind of material against the Eurasian block of China, Russia and Turkey. Now, it is extremely important to remember the Cold War days of the past and review the war instruments, excuses and methods of those days. Otherwise, in this psychological warfare, it will be inevitable to be the victim of scenarios created by the US think tanks, who are the creators and owners of all psychological warfare methods and tools. As in the last Gara operation against the PKK, it is very difficult to resist psychological war methods of these circles, after everything is done and finished. As stated by every war strategist from Genghis Khan to Sun Tzu, to be successful in the war, “one must always be one step ahead of the enemy”. This is especially the most important tactical issue in psychological warfare.

Is a new Gorbachev possible?

Speaking of Sun Tzu, let’s move from this famous war philosopher in Chinese history to the subject of the West’s new Gorbachov quest and expectation, which we mentioned above, in China and Russia today. Of course, the wheel of history doesn’t just revolve around a particular person’s decisions or desires. But when history finds a person fit for that moment, than its wheels start to turn much more faster. Gorbachev became President at the Soviet Union’s weakest moments, due to the country’s own internal and structural problems. Since the American strategists were always one step ahead, they assigned to Gorbachev the task of hitting the last nail in the Soviet Union’s coffin. It was not that difficult for them to do this through psychological warfare, the media, or Hollywood. Taking into account that internet and social media did not exist yet in those days, it becomes clear how successful they have planned and realized.

Nowadays, the Western world, and especially the US, searches for their new Gorbachev in both Russia and China. But neither the US is the US of once, nor are China and Russia the states of those old days. In spite of knowing that “you cannot swim twice in the same river,” they aim to create a new Gorbachev in this new cold war.

The West has won the Cold War against the Soviet Union by an arms race and by squeezing the Soviet economy in competition. Mikhail Gorbachev followed a reformist path with his policies called “glasnost = openness” and caused the destruction of his own state against the USA in a short time.

Is a “Glasnost” of the kind desired by the West possible in China today? Of course not. Under the leadership of President Xi Jinping, China, unlike the Soviets, has an enormously successful economy and an equally solid and strong army.

This new Cold War is fought less with ideologies and more with the “information flow” as main weapon. The West is trying to force a “Glasnost” by using Facebook, Instagram, Google, Twitter and many other “information flow” tools, in line with its own policies as much as possible. On the other hand, China and, to a certain extent, Russia have developed highly effective counter-attacks against these tools of the West and are constantly striving to stay ahead in the cold war.

A manifest of desperation?

Even the following ideas from a Biden supporting publication clearly show their intentions and their search for a new Gorbachev:

“Democracy won us the Cold War. But in the Internet age, Democracy has become its worst enemy. Beijing prevents US leaders from communicating directly with the Chinese people and telling them about the beauty of democracy. Democracy has been crippled in this new Cold War, but that doesn’t mean losing the war. Only this time we have no Glasnost (openness) we can rely on. ” As it can be understood, the US and the West, even as owners of all Internet channels and social media tools, are not at all satisfied with their positions in this new Cold War with China and rising Eurasia. And with great despair, they dream of being able to find or create a new Gorbachev.