“We did not allow U.S. dominance” 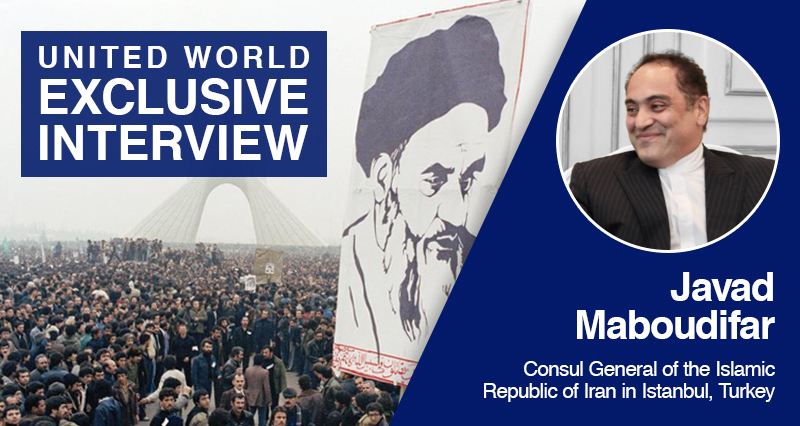 The Consul General of the Islamic Republic of Iran in Istanbul, Javad Maboudifar, has answered our questions on the anniversary of the Islamic Revolution. Maboudifar underlined that the main philosophy of the revolution was achieving the country’s independence. Pointing out that Iran has achieved great successes in spite of the embargos, Maboudifar stated that “Iran and Turkey always be friends and brothers”.

Today is the 42nd anniversary of the Iranian Revolution of February 11th, 1979, led by Ayatollah Khomeini. The anniversary, usually celebrated by the participation of big masses in every city, has this year been commemorated symbolically due to the Coronavirus pandemic.

Citizens have celebrated the revolution’s anniversary in their cars and on their motorcycles in Tehran and various cities by using their horns loudly and building convoys.

The Consul General of the Islamic Republic of Iran in Istanbul, Javad Maboudifar has answered our questions on the anniversary day of the Iranian Revolution.

There have been activities commemorating the anniversary of the revolution for the past 10 days. We know that these celebrations were very crowded in the past years. Are there any restrictions this year due to the Corona pandemic? How is the anniversary celebrated this year? Will the embassy organize a special event for this date?

As you have mentioned, the coronavirus pandemic appeared this year, making sanitary restrictions necessary. Therefore, we will not be able to host our guests in the embassy in Istanbul as we did in the years before. Therefore, we will commemorate the anniversary with a virtual event online.

We have gained our sovereignty

Shortly after the Revolution, the US has established the embargo against Iran. This embargo has continued until today. What is the role of the revolution in the fact that Iran continues to be an independent and sovereign country despite the embargo?

The Iranian people started the Islamic Revolution as an answer to the US interference into the country’s domestic and foreign policy during the times of the Shah. This was the main point of protest. There is a two hundred years old historical heritage, on which the identity of the people of Iran is grounded. This heritage does not permit any US dominance over Iran.

One of the decisive points in the uprising led by Imam Khomeini, may he rest in peace, were the privileges that US soldiers enjoyed in Iran. They had the privilege that, even if they committed a crime on Iranian soil, they were charged in the US only. This was an insult against Iranian sovereignty, and Imam Khomeini opposed this situation fiercely, leading to an uprising in the city of Qom in 1963. The Iranian people, full of love for national honor and political independence, started the Iranian Islamic Revolution that succeeded in February 11th, 1979.

The government has an independent political philosophy. This is the main uniting aspect as well as the insurance for continuation of the political system.

Two models dominated those times, the Western capitalism and the Eastern communism, where the Iranian Islamic Revolution has developed a new model of its own. A new and strong government was established with the founding of the Islamic Republic of Iran, based on Islamic jurisprudence and political thought, creating a model of a religion-based democracy.

Thanks to our independence, we side with the oppressed

How has the Iranian Islamic Revolution affected the country’s global positioning?

Exactly this development has angered the colonialists, and they have organized all kinds of complicated and heavy-handed conspiracies against our people. This development meant that after the Islamic Revolution, the Iranian people were independent in thought and politics.

Today, the world views Iran as an independent actor, a defender of the Islamic world’s pride, a strong supporter of the Palestinian people and as a country that opposes Al Kuds’ (Jerusalem) occupation.

For instance, you observe that the 8-years-long war Saddam has caused on Iran, Kuwait has supported the Baath Regime nationally and logistically, but later on, Saddam has occupied Kuwait with the same spirit of aggression. The Islamic Republic of Iran has than supported and helped the government and people of Kuwait.

When Saudi Arabia, the UAE and the GCC countries in the recent years have imposed a blockade on Qatar, Iran, together with the brotherly country Turkey, came to help Qatar and did not permit that the Qatari people and government suffers.

Additionally, the Islamic Republic of Iran has supported the Erdogan government during the coup in 2016 openly and strongly, while some regional and western countries were supporting the coup plotters.

The great martyr of Islam, General Qassem Soleimani, had supported Bagdad in liberation from ISIS occupation in the same spirit too.

Great success of the Revolution: the status of women has been elevated

How is the picture of Iran in the 42nd year of the revolution? Can you provide an evaluation on social, cultural, economic, political, technological and scientific aspects?

The religion-based democracy in Iran has achieved great successes, of which I can name some here.

– One of them is the rise of women’s status in society. Right now, 62% of students entering university are women. Women are occupying a wide range of leading positions in society; they serve as ministers, members of parliament and ambassadors. They win championships in national and international sports competitions. There was no such occurrence before the Revolution.

– Before the Revolution we had 20 universities, now we have 2569. We are leading the Islamic world in scientific production, and we are on 16th position worldwide.

– One of the historical deficits of Iran during the past 200 years was the lack of a national defense industry. The Islamic Republic of Iran has developed in spite of the embargos a wide range of defense instruments such as submarines, ballistic missiles with a range of more than 2000 km, attack and exploration UAVs and very strong air defense missile systems named Khordad 3. For instance, as happened at midnight on June 20th, 2019, we are able to detect and take down the 250 million dollar US drone Global 95/ Hawk.

– Our wheat production has risen from 4 to 13 million tons.

– Additionally, we have been able to send various satellites independently to space.

What does the Iranian Islamic Revolution mean for the people? What values does it represent?

The Islamic Revolution and the establishment of an order based on religion-based democracy was an answer to the Iranian people’s historical demands. During the times of the Shah, the complete dominance of the US over Iranian politics, military and economy has dishonored our national pride, and the Iranian people have won back their national pride by realizing the Islamic Revolution.

The religious democracy was institutionalized in Iran, and until today, we have realized more than 40 elections, including presidential, parliamentary, local council elections. It is very noteworthy that Iranian living abroad, living in Europe or the US, actively and in huge numbers participate in our presidential elections, displaying the trust and interest towards the political system of the Islamic Republic of Iran also among our citizens abroad.

The youth demands university and work

Does the dedication and belief of the Iranian people into the Revolution continue? How is the consciousness especially among the young generation on this topic? What does the Iranian youth expect and demand from the progress of the Revolution?

The Iranian youth has new demands connected to fast technological developments, which all our government officials try to satisfy wholeheartedly. To satisfy these demands and enable our young generations to find better positions of occupation in future, higher education was expanded and universities were founded in all of Iran’s cities.

Turkey and Iran have proven their friendship

How would you describe the Turkish-Iranian relationship in the 42nd year of the revolution?

Iran and Turkey have always been friends and brothers. We have very deep historical and cultural connections, which will, God willing, last till eternity.

Now, we have also a very close relationship between the two presidents of our countries. The Foreign Ministers have visited the other country’s capital various times. Thankfully, the macro economical will on both sides has led to comprehensive and growing economical and political ties. Iran and Turkey have proven and displayed their friendship in all the hard times in the past.

As we have mentioned above, two paradigms prevailed through the Cold War, almost all the revolutions in the second half of the 20th century were committed either to the capitalist or the communist political model, whose common ground was to keep religion out of political life. But then, the Revolution led by Imam Khomeini, may he rest in peace, whose main slogan among others was ‘Neither Western Nor Eastern, we are Islamic’, has gained a huge and complete victory relying on the doctrine of the Islamic Republic. This new strategy has revived Mohammed’s name in the world again.

The Iranian Shah, Mohammed Reza Pahlavi, has left the country on the January 16th, 1979, because he was not able to contain the popular uprising against US’ and Western intervention to Iran. Imam Khomeini, who was condemned to death by Pahlavi before, has returned on February 1st from his exile n Paris and was welcomed by a crowd of 3 million Iranians at the airport. On February 11th, 1979, the Islamic Revolution under the leadership of Imam Khomeini was declared.