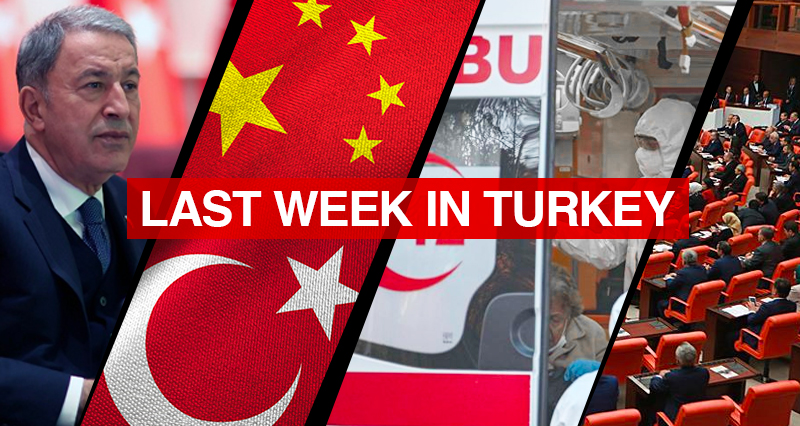 The first topic was the debates over a change in the Turkish constitution, which has been demanded by various political groups.

The second was Defense Minister Hulusi Akar’s visit to Germany and his discussions with his German counterpart about the Eastern Mediterranean.

The third agenda item was the extradition agreement signed between Turkey and the People’s Republic of China, and debates about Uyghur refugees being deported back to China.

The fourth agenda item was the ongoing vaccination and lockdown efforts, and the latest developments of the Covid-19 pandemic.

DEBATES OVER A NEW CONSTITUTION

On Monday, Turkish President Recep Tayyip Erdogan said that “perhaps it is time for Turkey to discuss a new constitution again.”

If Turkey’s ruling Justice and Development Party (AKP) reaches consensus with its partners in the People’s Alliance, then an “action for drafting a new constitution in upcoming period” is possible, Erdogan said after a Cabinet meeting at the presidential complex.

Underlining that the reworking of the constitution must be done in a transparent manner, Erdogan said the final text must be presented to the discretion of the nation.

In parliamentary votes and elections, the Nationalist Movement Party (MHP) has cooperated with the ruling AKP within the framework of the People’s Alliance, formed ahead of the June 2018 general elections.

Following the announcement of a possible new constitution, Erdogan welcomed Wednesday everyone who wished to contribute to the drafting of the document.

“Such a comprehensive work will become meaningful with involvement of all groups in the country,” Erdogan told AKP’s provincial congresses via video link from the party’s headquarters.

“We would like to see all groups, who would like to make positive contributions to the process, in the efforts for the new constitution,” Erdogan noted.

He said the constitution will be built on the “historical initiatives” the AKP has taken in the country, especially the presidential system.

Erdogan emphasized that leaving aside a constitution which has lost its integrity and consistency due to changes over the years and working on a new constitution will pave the way for Turkey to reach its goals in the years ahead.

Welcoming the support by Devlet Bahceli, the leader of the Nationalist Movement Party, for a new constitution, Erdogan said they would be working together with the MHP’s People’s Alliance.

On Tuesday, Bahceli said Turkey is “obligated” to replace its current constitution. He also said that the country’s constitution in its present form was the “product of extraordinary conditions”.

Turkey’s parliament speaker said that the debates around the new constitution are an exciting development.

“As a person who has been involved in such efforts before, I’ve welcomed this with greater excitement,” Parliament Speaker Mustafa Sentop told the Turkish media on Wednesday.

“It will be correct to involve all political parties represented in the parliament while debating a new constitution,” he said.

“New Constitution debates in Turkey have been discussed since 1982 because there is a serious problem regarding the way the Constitution came into force in 1982 and there is a legitimacy debate on this matter,” said Mustafa Sentop.

“Undoubtedly, it was put to a referendum, but the discussions about the content and provisions of this Constitution and the way it was made have not come to an end,” he continued.

“The most recent government made a change that occured in a referendum on April 16, 2017, related to the system, but the constitutional debates did not end in Turkey. In my opinion, they should be ended with a draft of a new Constitution by an assembly elected by the votes of the nation.”

“As a person who has been involved in such efforts before, I’ve welcomed this with great excitement. Can Turkey achieve this? Yes, it can. It is necessary to approach the issue with sincerity. Imposing approaches are not correct. I would like to say that I am hopeful about this. However, an approach that questions the sincerity of the process from the very beginning, attempts to interpret others’ intentions, and which opposes the idea of the new Constitution is not constructive. If we take a constructive approach, steps can be taken on the new Constitution and progress can be made,” said Sentop.

Sentop noted that a new constitution should not be made based on the seat numbers of the parties in the Turkish parliament.

The constitutional change would be possible with the votes of 360 lawmakers in the parliament.

A day after the meeting Akar said that Turkey and Germany will take concrete steps in defense and security fields in the coming days.

Noting that the meeting with Kramp-Karrenbauer was “very constructive,” he continued: “We have observed with great pleasure that we share similar opinions on many issues. I assess that some concrete steps will be taken especially in the fields of defense and security in the coming days as a result of this meeting.”

Akar added that Germany is among Turkey’s most important allies and partners in Europe’s security and politics, NATO, Organization for Security and Co-operation in Europe (OSCE), Council of Europe, and economic institutions.

“We expect that our works will lead to positive results soon. Taking into consideration the meetings between our president and Chancellor Angela Merkel, I assume that it will be possible to carry out more constructive, positive, and productive work,” he continued.

He went on to say that Turkey has fulfilled all of its responsibilities to date and will continue to do so.

Akar also stated that negotiations with Greece on the Eastern Mediterranean and the Aegean are expected to be more productive in the coming days.

He said that a total of eight meetings has been held with Greece to date and that Turkey expects Greece to be more “involved” in the upcoming meetings.

“We hope to come up with peaceful solutions to the problems between Greece and Turkey through these negotiations. We want everyone to know that we are ready to make necessary contributions to resolve the issues,” Akar continued.

Noting that Turkey with its research ships has so far done nothing except technical and scientific studies, Akar added: “We avoid any attitude and action that may negatively affect the relations between the two countries. On the other hand, we do have certain rights.”

Akar’s visit came after the resumption of direct talks between Turkey and Greece on January 25, following Germany’s diplomatic efforts to de-escalate tensions in the Eastern Mediterranean.

EXTRADITION AGREEMENT BETWEEN CHINA AND TURKEY

The Treaty signed between Turkey and China on May 13, 2017 is a recurrence of previous treaties.

According to the Treaty, which is pending the approval of the Grand National Assembly of Turkey, Turkey has the right for mandatory and arbitrary denial of the request in case where China requests extradition of Uyghurs residing in Turkey that are deemed “guilty”.

The propaganda spread by the US calling attention to “Chinese cruelty” has been fabricated with lies, showing certain similarities to the propaganda regarding the alleged “cruelty against Kurds” in Turkey.

The United States is working to undermine the relationship between Turkey-Russia-China, understanding the importance of the alliance’s potential in determining the world political balance.

The US has therefore recently categorized Turkey as a “hostile state”, a “rogue state”, or an “enemy state” in many official documents and has begun to impose sanctions.

In order to pursue their hostility policy against Turkey, the US has initiated plots to generate hostility between our country and China, Russia and Iran.

Dr. Dogu Perincek, Chairman of the Vatan Party, made declarations on the issues regarding the Extradition Treaty signed between Turkey and China in 2017 and clarified the allegations:

“The Vatan Party’s approach to the Xinjiang-Uyghur Autonomous Region of the People’s Republic of China originates from Turkey. Today, Turkey is shaping its Defense Strategy in consideration of US and Israeli threats.

Aside from its priority regional countries like Iran, Iraq, Libya, Azerbaijan and Russia, Turkey has to establish joint security partnerships with China and the Central Asia Turkic Republics.

Secondly, in order to build up an employment-oriented production economy and escape from the economic trap, Turkey must tap into its considerable potential for cooperation with regional countries, and Russia and China in particular.

Relations between Turkey and China are especially important in escaping this hot-money bottleneck.”

VACCINATION AND LOCKDOWN EFFORTS AGAINST THE PANDEMIC

In Turkey, healthcare professionals are administering doses of CoronaVac purchased from Chinese company Sinovac, and so far, immunization efforts are going smoothly.

The number of people in Turkey who have received their first doses of a vaccine against the coronavirus crossed the 2.5 million mark as of Thursday, according to official figures.

Turkey began its mass COVID-19 vaccination campaign on January 14, starting with healthcare workers along with top officials to encourage public confidence in the vaccines before moving on to older individuals.

Since last December, Turkey has also been implementing curfew on weeknights and a full weekend curfew to curb the spread of the virus.

Turkish experts have warned against three new strains of the coronavirus from England, South Africa and Brazil that now threaten the world due to its high rate of transmission.

There are concerns that the variant virus might become the dominant strain in mid-February. In Turkey currently, there are 128 cases — including 114 from the UK — of the new strain.

A Turkish medical expert voiced support for a recent study that suggested a single shot of coronavirus vaccine can be preventive enough for coronavirus survivors, saying it would also provide vaccines for millions of people.

In a new study published on Monday, researchers from Icahn School of Medicine at Mount Sinai in New York observed that participants who were previously infected with the coronavirus gave an equal or higher antibody response after they were administered the first dose of the mRNA-based vaccine than those did not catch the virus and received two doses of the same vaccine.

Dr. Fatih Sahiner, a medical microbiologist and virologist at the University of Health Sciences, Gulhane Faculty of Medicine in the capital Ankara, agreed with the study.

“Administering the second dose of vaccine to coronavirus survivors will not have an additional benefit. And with a single dose of vaccine given to these people, it is possible that millions of more people could reach the vaccine and develop immunity against the virus,” Sahiner said in an interview.

The one-shot virus implementation would undoubtedly be a reasonable strategy during the pandemic period, he argued.

“Since a person who recovered from an infectious disease already has protective immunity to some extent, their immune system perceives the vaccine as a new infection and responds strongly,” he added.