US government considers its military source of “domestic extremism” 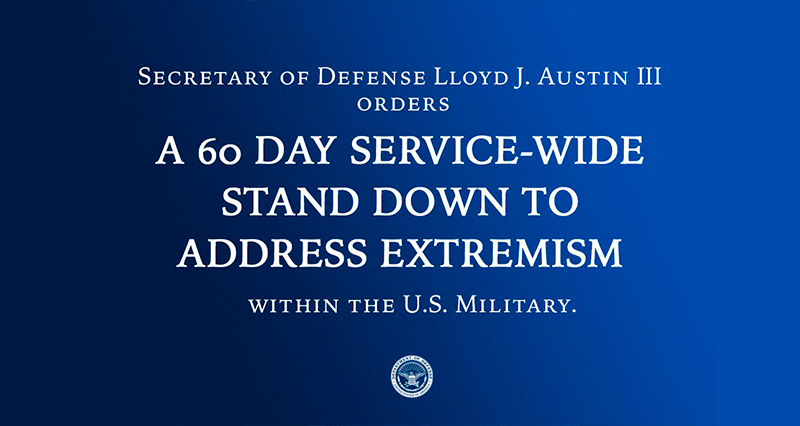 Secretary of Defense Lloyd J. Austin III has ordered a Department of Defense-wide stand down to discuss the problem of extremism in the ranks, Pentagon Press Secretary John F. Kirby said.

The order was given after several active duty members took part on the Capitol Assault 6th of January.

All units ordered to discuss

Pentagon spokesperson Kirby stated in a press conference that the stand down will occur over the next 60 days so that “each service, each command and each unit can take the time out to have these needed discussions with the men and women of the force”.

The decision was made public after a meeting between Austin and military leaders, where, according to US DOD press release Austin said the extremist’s “numbers may be small, they are not as small as anyone would like”.

The Pentagon spokesperson questioned the productivity of the US military after the Congress Assault, speaking to Reuters: “We don’t know how we’re going to be able to get after this in a meaningful, productive, tangible way and that is why he had this meeting today and that is why he certainly ordered this stand-down,”

The Pentagon did not define whether stand-downs pausing regular activity across the U.S. military might last minutes or hours, or what commanders would do during that time to express opposition to extremism, reports Reuters.

Austin is the first black person to be the Secretary of Defense, and Stars and Stripes reports that his personal experience has a strong influence on the current measure.

In 1995, Austin was a lieutenant colonel at Fort Bragg, N.C., when soldiers based there were charged with murder in the deaths of two Black people in nearby Fayetteville, N.C. The soldiers turned out to be members of a neo-Nazi group.

Several active US military officers had participated in the Congress Assault and resigned from duty afterwards. Following the assault, the debate about domestic terrorism and extremism had gained momentum.

Spokesperson of the Department of Defense had pointed to active duty members as potential “domestic extremists”, by stating the following “We clearly recognize the threat from domestic extremists, particularly those who espouse white supremacist or white nationalist ideologies. We are actively involved in always trying to improve our understanding of where the threat is coming from as a means of understanding and taking action.”

There has been long times reports about so called white supremacist organizations in the US military. These have become the major source of concern for active US military personnel. In a 2018 survey among active members of US military, 35% named “white supremacists” as main threat to US national security, followed by 24% pointing to Syria, 23% to illegal immigration and 13% to Afghanistan.

The Department of Defense is meanwhile preparing programs to “improve racial and ethnic diversity and inclusion” in the military. These also aim to better represent LGBT groups within the military, causing harsh criticism from conservative circles.

The US has displayed a divided politics and society with the Congress Assault 6th of January. The continuation of this polarization into the military raises questions on US domestic security and external military capability.