Ankara, Moscow and Damascus vs. the US and the PKK/PYD: recent developments 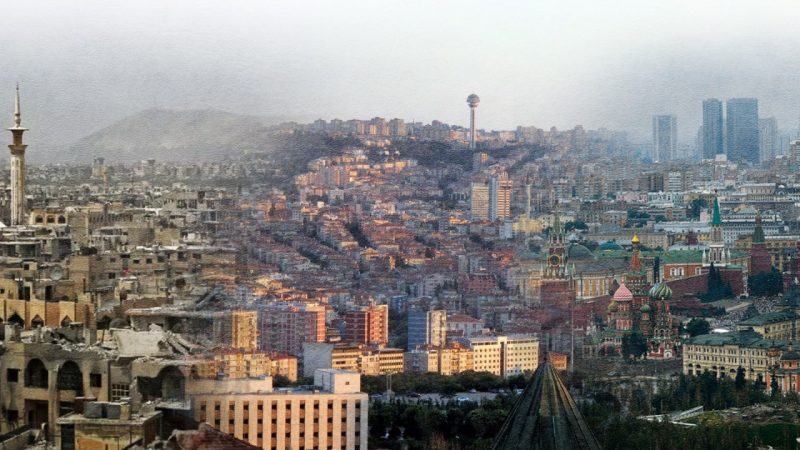 Syria and Russia had harsh reactions against recent developments in the ongoing cooperation between the US and the PKK/PYD, issuing a joint statement. The statement cited “the agreement signed by the American company Delta Crescent Energy, about the extraction of the Syrian oil with terrorists” as an example.

Representatives from both countries stated that the illegal presence of the United States forces and its allies among the International Coalition in Syria had been used to exploit the Syrian Arab Republic’s natural resources and to provoke tensions in the region.

The following highlights were made in the statement:

“…The best example of this, is the agreement signed between the American petroleum company Delta Crescent Energy and the separatist terrorist forces active in Northeastern Syria, about a joint extraction and exportation in the oil fields.

The aforementioned agreement totally ignores international law, violates Syria’s national sovereignty and its territorial integrity, serves to cover the funding of the US-backed terrorist zones, and clearly shows Washington’s actual policies to disturb the efforts to restore a post-war legitimate government and the efforts to reunite the nation.”

The representatives from both countries also stressed that such activities are illegitimate and illegal, in the joint statement.

Erdogan and Putin’s talks on Idlib: a brief analysis

A PUPPET STATE BACKED BY THE US

The United States has increased its activities in Syria and again began to push for the foundation of a new puppet state, especially since early 2020. Supplies delivered to Northeastern Syria have increased, and secret talks have begun with the PKK/PYD. The United States had initiated a new process in terms of military, administration and economy in order to open the “Kurdish corridor”:

– Military steps were taken, in order to ensure the security of the PKK/PYD and the United States has redeployed to the zones it has previously evacuated before the Operation Peace Spring.

– On the administrative field, the capital of this puppet state was determined to be the city of Al-Thawrah, and the institutions were organized with the leadership. Syria’s separatist forces have united as a result of the “US-sponsored negotiations”, according to the PKK/PYD’s own words.

– In economic terms, steps were taken to keep the US corridor alive with the oil revenues- this process was finally crowned with the latest deal on oil extraction. A group of 250 members of the PKK/PYD, who were trained by the American advisors; is used for the security of the oil fields.

– The United States did not only train the separatist terrorism, but also trained extremist terrorist organizations to be used in this process. We have covered the issue of growing contacts between Americans and the international extremist terrorist organizations in Syria, in our article on June 1th 2020 (https://unitedworldint.com/11267-washington-revamps-efforts-toward-kurdish-puppet-state/), when we described the whole process. We have covered that more than 1,000 terrorists from international terror organizations, were sent to the Al-Hasakah Region from the US-controlled Al-Tanf training camp (located near the tripoint between Iraq-Syria-Jordan border), and that the vast majority of those terrorists were deployed at the American-controlled Al-Shaddadah base in Al-Hasakah Region, in April 2020.

THE SECRET PRISONER EXCHANGE BETWEEN ISIS AND THE PKK

A NEW PHASE IN THE RUSSIAN-AMERICAN RELATIONS IN SYRIA

However, the murder of a senior Russian General in a bombing strike near the Syrian City of Deir ez-Zor on August 18 has taken this clash to a whole new level.

Russian authorities have found out that the group “Soldiers of the Caucasus”, which has pledged allegiance to ISIS this January, had carried out the attack, and that these terrorists had been trained in the aforementioned American-controlled Al-Tanf camp, and then sent to the east side of the Euphrates River.

A rocket attack took place on the US military base at the Conoco refinery in Deir ez-Zor the same day that the Russian Major General was killed.

A new phase has begun in Syria, for the US-Russia relations in the wake of these incidents. It is expected that the Russian attitude against the US presence in Syria will harden even further. Consequently, stronger steps may be taken for the eradication of separatist and extremist terrorism. The statement which we mentioned in the beginning of the article is a key sign of this.

MEETING BETWEEN LAVROV AND THE DEMOCRATIC SYRIAN COUNCIL

We should also evaluate the meeting that took place in Moscow between the Russian Foreign Minister Sergey Lavrov and the delegation of the Democratic Syrian Council, a branch of the PKK/PYD. The fact that the meeting took place at the highest level, has provoked a justified reaction from the Turkish Foreign Ministry, albeit with a lower tone.

The Russian Ministry of Foreign Affairs has announced that Russia is ready to make any effort necessary to insure the establishment of Syrian territorial integrity and sovereignty. In addition, the articles of the joint declaration signed in Moscow by the Democratic Syrian Council and the People’s Will Party of Syria, include “protection of Syrian territorial integrity, national sovereignty and a joint administrative system,” “the acceptance of the Syrian Army as the national army”, and “the acceptance of the New Syria as united with all its lands and its people”.

On the other hand, we can say that no negotiations took place against Turkey during this meeting. Moreover, the meeting request has come from the Democratic Syrian Council. The actual goal of the meeting for the Democratic Syrian Council was to buy some time against Russia, whose reactions keep growing over time, saying: “we do not only negotiate with the United States, but we are also open to have a dialogue with you”.

This distraction clearly did not succeed, as can be seen in the statement in the beginning of this article. Russia has described the organizations which it had met a few days ago, as “separatist terrorist forces”.

Of course, all these can be perceived as Moscow aiming to divide the opposite forces, create confusion and fear among them, and integrate some of them with the Damascus Administration after the disruption of the relations with the United States in Syria, and some new steps taking place.

THE CONDEMNATION OF THE OIL AGREEMENT FROM ASTANA

There is no reason to become hopeless over the situation, especially when we look at the Astana front. The Erdogan-Putin-Rouhani summit, which took place on July 1 and an agreement was reached upon the issues of East of the Euphrates and Idlib. The unification of these two regions under a single front was the key point in solving this problem. The oil banditry of the US-PKK/PYD alliance was emphasized here as well.

The Astana tripartite has also condemned the oil deal signed between the American oil company and the terrorist group PKK/YPG on August 25, the US’ Caesar Act against the Syrian government and the Israeli airstrikes against the Syrian Army. Damascus has also condemned the oil agreement between the United States and the PYD beforehand and stressed that there is no legal basis for the agreement.

TRIBES ARE MOBILIZING AGAINST THE US INVASION

In the process, the Akidat Tribe of Deir ez-Zor, has established its own special military unit. “The Akidat Army”, which is armed and supported by the Damascus government, has declared that it has initiated its public resistance, against the US invasion and the PKK/PYD.

The Turkish-Russian joint patrols in Idlib have often faced attacks, but carried on with a dedication, and the patrol area, which is under constant reconnaissance, kept expanding. Recently, the two countries have conducted a joint military exercise in Idlib for the first time against these kinds of attacks. The companionship has moved to a whole new level as a result of these measures. Russian Foreign Minister Lavrov has said on September 1 that “there is still a lot of work to do in Idlib, but we see progress and the most important of all we see no more bloodshed”.

The Russian state-owned news agency RIA Novosti has also commented that Moscow has understood the mindset of Ankara in Idlib:

“Ankara seeks to integrate the moderate Islamists of the HTS (Hay’at Tahrir Al-Sham) with the Syrian opposition. And it wishes to eliminate those who chose to side with the Hurras Ad-Din. Moscow and Ankara could use the division between Islamists, to clear out the area from Islamic extremists.

In addition to the Syrian issue, the Libyan dialogues, which took place in Ankara at late-July and in Moscow at early-September, also ended positively. Moreover, Turkey’s purchase of a second battery of S-400s has come back on the agenda.

THE FORMULA FROM BOLTON

The recent answer from the former National Security Advisor to the US President to the question of how the puppet government structure in the Northeastern Syria could gain political reputation is noteworthy in summarizing the issue:

Thus, a formula for Turkey has been made evident. It is clear that the opposite of what Bolton’s words suggest would be to Turkey’s benefit.

It is clear who is the friend and who is the foe when it comes to Turkey and Russia. Now the process puts it in a way that leaves no room for a discussion. Both sides do not have the luxury to act wrong, or to ignore these acts even in little amounts.

The program for the solution is clear for everyone: The Astana Summit countries must end the US presence together with Damascus, separatist and extremist terrorism should be destroyed with no exceptions, and the Syrian territorial integrity should be reestablished with the full sovereignty of Damascus all over the country.