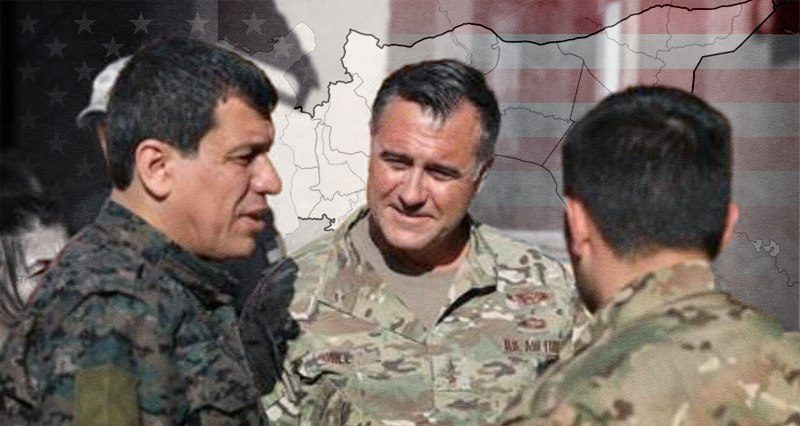 Local sources in Syria have been reporting that Washington has again been active over the past month about the “US corridor”. The United States has sped up its efforts on the ground towards the creation of a puppet state in Northeastern Syria, on the military, administrative and economic front.

THE SECURITY OF PKK/PYD WILL BE MAINTAINED

Sources in Syria reported that as of May 10, 2020, the Pentagon has been transferring its military personnel, munitions and military equipment every single day, from Iraq to the Al-Hasakah region, which is controlled by the PYD/PKK. Convoys of armored vehicles of the US Army regularly send deliveries to the Qazaq air base in Tall-Baydar, which has been inoperational. Along their journey, American convoys are escorted by UAVs. The border crossing between Iraq and Syria takes place through Bara (Iraq) and Al-Hawl (Syria).

According to regional sources, two US Army cargo planes landed at Qasraq air base on May 10 and 11, which brought in armored vehicles, engineering technical equipment and some other heavy weaponry. A portion of these personnel and equipment will be deployed at restructured bases and at the US checkpoints near Qamishli and Darbasiyah. Their main task would be to assist the military and the political forces of the PKK/PYD, with ensuring their security measures on the Syrian-Turkish border.

Sources also point out that specialized teams of oil and gas extraction was brought to Northern Syria alongside the American military personnel. This group is composed not only of US citizens: there are experts from Canada, Saudi Arabia and Kuwait as well.

This team of experts will soon begin their oil and gas exploration activities in the Al-Hasakah region. The areas of interest are the oil fields of Al-Omar, Conoco, Rmelan and Al-Tanak. Almost all of these areas are under PKK/PYD control. The security of the exploration team will be provided by the US Army personnel in the region. After the end of exploration and drilling efforts, the United States is planning to move on to the maximum level of oil extraction.

Regional sources also report that the United States is speeding up its project to establish a PKK/PYD autonomous region in Northern Syria, which directly targets Ankara, Tehran and Moscow. This action is considered as a part of Washington and Tel-Aviv’s plan to establish a “Greater Kurdistan” on Turkish, Syrian, Iraqi and Iranian lands.

Sources that gather the information directly from the field have described another step being taken in the name of this grand plan as follows: On April 25, 2020, secret talks had taken place between Pentagon and PYD leaders and some members of the Kurdish Supreme Committee, in the Ayn-al-Arab (Rojava) region. They also met with the SDF commander Mazloum Abdi (Kobani), a representative from the Kurdish Supreme Committee that functions as the interim government in the region. (As it will be remembered, the US President Donald Trump has thanked Mazloum Kobani on several different occasions.) The commander of the US Central Command (CENTCOM), Kenneth McKenzie, was representing on behalf of the American delegation. Former the Special Presidential Envoy for the Global Coalition to Counter ISIL Brett McGurk, also attended the meeting.

Syrian Democratic Forces over the years fought bravely and defeated the physical caliphate, but Daesh remnants and sleeper cells still exist. @SOJTFOIR continues to partner with #SDF to pursue Daesh and provide security and stability to the region. #DefeatDaesh #LifeAfterDaesh pic.twitter.com/wnmEkfzS1E

In the meeting, the unification of all the political parties in Ayn-al-Arab (Rojava) Region to form a unified government was also discussed. The Americans proposed the establishment of ministries to maintain the region’s vital necessities as soon as possible to the PKK/PYD/SDG representatives. Furthermore, a decision was made to divide the “Syrian Kurdistan” into several regions for an effective rule of the entire autonomous region. The city of al-Thawra was chosen as the administrative center of the region (or so-called the capital). All the governing bodies were decided to be established there.

With this, the Americans have made sure that the separatist organization’s leaders were to significantly cut down the amount of illegal oil and grain exports to Assad’s government.

THE US SUPPORTS EXTREMIST TERRORISM

Regional sources also point out the growing number of Americans contacts with the international extremist terrorist organizations in Syria. In April 2020, more than 1,000 terrorists from international organizations were sent to the al-Hasakah region from the US-controlled Al-Tanf training camp (located at the intersection of the Iraq-Syria-Jordan border). The vast majority of these terrorists were deployed at the American Ash-Shaddad base in Al-Hasakah.

At the same time, a significant increase in the number of the US and British military personnel in the Al-Hasakah region has been observed. The British have also begun their work again at bases near the Abu Hajar and Malikiyah airfields. The sources note that the US military experts are training the terrorists with tactics such as conducting intelligence-sabotage activities. In these trainings, the use of armor-piercing weapons and transportable anti-aircraft missile systems was noted.

According to the information gathered, some mobilized groups are being established with the terrorists who were sent to al-Hasakah region. These groups are being prepared to carry out destructive activities deep into the areas controlled by the Syrian Army. One of these groups, primarily consisting of Tunisians and Moroccans, is led by a so-called field commander, Abu Ali Al-Jummali, a former officer of the Saddam-era Iraqi Army. Al-Jummali is working on a plan to attack the Syrian Army stationed around Deir ez-Zor.

In addition to all this, it has been recorded that the United States is trying to activate its relations with fighters from the terrorist organization called “Front for the Conquest of the Levant” (formerly known as al-Nusra Front). In the early May of this year, the terrorist groups, led by so-called field commanders of Mohammed Alyonof and Hamed Al Jarh, have received financial support from the United States, in preparation for assassinations and sabotages against Syrian the military personnel in Latakia.

Regional sources have also added that these groups could also be preparing for an attack on Turkish and Russian troops in order to disrupt the cooperation of Moscow and Ankara in Idlib region and to disturb friendly relations between Erdogan and Putin.

The information we shared shows that the United States is willing to begin a new process in terms of military, administration and economy with its puppet state plans: militarily, security for the PKK/PYD will be provided, administratively, institutions for this puppet state will be established, and economically, oil revenues will be used to feed the American Corridor.

The recent activities of the United States in the region also verifies these arguments. Washington has increased its efforts to reconcile the PKK/PYD with the Barzani Regime, conducting a heavy diplomacy of mediatorship. Just a few days ago, US Deputy Special Envoy to the Global Coalition to Defeat ISIS William V. Roebuck announced that the “Caesar Act” against Syria did not include this so-called autonomous region, that the United States would jointly work with this so-called autonomous region and that it will implement some support programs. William Robak had held talks with the PKK/PYD leaders about security and economic issues. Last week, Syrian SDF Commander-in-Chief Mazloum Abdi held a meeting with US Maj. Gen. Eric Hill, who commands the Special Operations Joint Task Force – Operation Inherent Resolve (SOJTF-OIR).

In short, all signs point to renewed efforts toward the creation of a puppet state.

COOPERATION OF SEPARATIST AND EXTREMIST TERRORISM

The separatist terrorist organizations of PKK/PYD are the main elements of the US’ intended puppet state. While the extremist terrorist organizations play a role in creating the legitimacy for a puppet state, separatist terrorism and American military presence in the region. The PKK/PYD hype comes from defining them as “heroic fighters against Islamic terrorists”. On the other hand, extremist terrorism acts as a disruptive agent upon the Turkish and Syrian nations. In addition to that, it is also turning into a weapon of sabotage against the Astana process, which is the greatest obstacle to the US plans, and serves to foster the deterioration of Turkish-Russian cooperation.

As a matter of fact, when Trump said that ex-presidents Obama and Clinton founded ISIS a few years ago, he was making a similar point. In a similar way, we have witnessed the US-PKK/PYD axis cooperating during Operation Peace Spring. The extremist terrorism which is now being defeated in Syria is being resurrected with this puppet state plan.

CAN THE US’ PLANS BE STOPPED?

All of this tells us that the fight against separatist and extremist terrorism cannot be separated from each other, and that Idlib should be perceived as a united front with the East of the Euphrates River.

In other words, the elimination of one terrorist element is a prerequisite for the collapse of the other. For this reason, Turkey and Russia cannot favor one and oppose the other. Eliminating the cancerous cells in only one part of the body will surely not cure the disease. On the contrary, it will pose a danger of spreading.

The Astana process, which has broken the US initiative in Syria and taken over the course of the region, has once again been verified in light of these new events. Insisting on the Astana process is the only way for the peace, prosperity and the security of the region. Our objective is clear: the elimination of the separatist and extremist terrorist elements which undermine Syrian territorial integrity.

At this point, Turkish interests also coincide with the Syrian interests. The recent statements from PYD/PKK leaders about Damascus not taking them as a belligerent party and declaring them illegal is the simplest way to understand this. The unity of interests naturally fosters joint actions in the elimination of separatist and extremist terrorism.

THE NEED FOR A HOLISTIC STRATEGY

Another necessity of preventing the new US actions for a “corridor” would be to create a holistic strategy and a chain of alliances against Atlanticist plans. Washington’s strategies in Syria are not independent of their plans in the Eastern Mediterranean Sea, Black Sea, Caucasus Region, Central Asia, etc. Therefore, Ankara should have a grand strategy to stop Atlantic plans in Syria, Libya and the Black Sea, and establish alliances accordingly. The US threat can only be eliminated by such a holistic strategy. Believing that we can fight the United States in Syria while cooperating with it somewhere else will not only cause us to deceive ourselves but will also undermine our fight against the creation of a Kurdish puppet state.