New wave of Covid-19 in China, Turkey in Libya, state of emergency in Nigeria 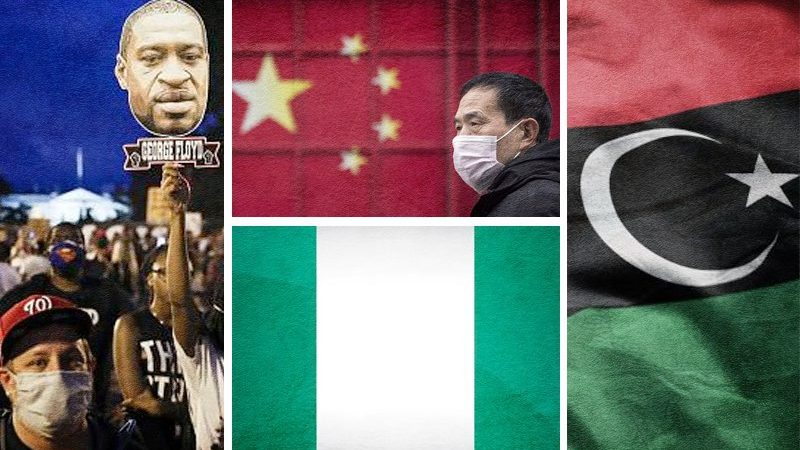 China, the first to defeat the dangerous wave of coronavirus, has taken new tough measures in response to the discovery of new Covid-19 infections in Beijing.

It all started with the detection of the virus on a salmon board in the Xinfadi market, Fengtai, Beijing’s largest wholesale market.

According to the press service of the Chinese government, the risk of infecting the city is extremely high. The market was temporarily closed, and the area was put under a full quarantine regime, the level of response to emergency situations in the field of public health again increased to II. At the same time, citizens living in 11 residential complexes located near the market are obliged to observe a regime of self-isolation and not to leave their homes. Three primary schools and three kindergartens were closed.

Already in a second city, Baoding (population about 11 million, Hebei Province), martial law was introduced. The city poses a threat, including to Beijing, which is heavily connected by transport.

This demonstrates that premature removal of the measures could turn into a second and third wave of the epidemic. It also shows that the Chinese authorities and locals are highly organized and have learned to take strict measures to curb the spread of the infection.

Unrest in the US

In the US, protests and confrontations with police sparked by the murder of African American George Floyd by a white police officer in Minneapolis continue.

The geography of the American protests has expanded.

Moreover, at the same time, a new scandal broke out: on Friday in Atlanta, when Rayshard Brooks was detained, at which point he allegedly refused to take a blood alcohol test and resisted officers, a scuffle which resulted in his being shot by police. In a published video, Brooks admits he was drinking alcohol. The tape also seems to show him attempting to steal a police taser in order to escape.

Nonetheless, the measures taken by the police are widely considered to be excessive – the city police chief Erika Shields immediately resigned: the restaurant in Atlanta where Rayshard Brooks was detained was set on fire during a demonstration.

Recent weeks have seen attempts to demolish statues associated with slavery in response to the anger of the protesters. The most recent case is that of New Orleans, where protesters demolished a statue of John McDonough and threw it in a river.

In response to the events, US Congressmen proposed a new US Police Reform Bill on June 8 (presented by Speaker of the House of Representatives Nancy Pelosi). According to the document, control over police officers will be strengthened, and the stations themselves will face serious structural changes (in particular, there were proposals to introduce alternative bodies, such as in Minneapolis).

However, as we wrote earlier, the root problem of racism lies in the US economic system itself.

The new US Civil War: Who are the real enemies of ordinary Americans?

Rapid developments in Libya are now at the top of the international relations agenda.

There have been several important events in the region this week.

The renegade general of the Libyan National Army Khalifa Haftar has decided to reorganize its command structure amid a retreat of its forces from a number of positions in opposition to the UN-recognized Government of National Accord holding Tripoli. The LNA forces are confronting the GNA forces in Sirte. The GNA is determined to regain control of this city, which they lost in January 2020.

The same week the Turkish side expressed its dissatisfaction with the “Cairo Initiative” formulated the day before). Turkish Foreign Minister Mevlut Cavusoglu assessed it as not ‘sincere,’ ‘convincing,’ ‘stillborn’.

Recall that Egyptian President Abdel Fattah al-Sisi met with Haftar and the head of the eastern Libyan House of Representatives, Aquila Saleh, in Cairo. As a result of the meeting, the head of Egypt announced the “Cairo initiative”, which implies a ceasefire throughout Libya since June 8. The document also describes the conditions of political regulation.

Despite the unilateral nature of the Cairo initiative, it demonstrates that in the current situation Egypt is ready to explore ways of diplomatic solution to the Libyan crisis. This provides an opportunity for a kind of Astana format for Libya organized alongside the Ankara-Moscow-Cairo axis. This format will maximize the interests of all three parties and drastically limit the subversive influence of imperialist powers on the situation in Libya.

In addition, this week there was some important news from Yeni Safak, citing military sources. According to the publication, Turkey is preparing to establish two permanent military bases in Libya. Yeni Safak says that the government of Libya’s national consent is considering providing Turkey with Al-Watiya air base, where Ankara plans to deploy air defense systems and combat drones. It is assumed that the second base may be established in the port of Misrata, where Turkish ships will be deployed.

However, the US is trying to pit Turkey and Russia against one another once again on Libyan soil so that the countries cannot coordinate their de-escalation efforts. Thus, US Assistant Secretary of State for the Near Eastern Affairs David Schenker said that Russia is to blame for the Turkish actions in Libya, as it allegedly supports LNA with weapons and forces. According to Schenker, Turkey is satisfied with its “intervention” in the country.

Meanwhile, the US has been silent about its own ventures in the region. We wrote earlier about how JINSA, one of the leading institutions of the Israeli lobby in the United States, recently declared that “America Must Act In Libya Against Turkey, Russia”.

The US Strategy in Libya exposed by the Israeli lobby

A variety of serious events took place in Nigeria this week, making the country a hotbed of instability.

First, there was a sharp rise in crime (including sexual violence). Governors of all 36 Nigerian states have decided to declare a state of emergency in response to an increase in rape and other crimes against women. Initiatives include the maintenance of a special register of perpetrators and rapists.

Secondly, there has been a new wave of terrorist attacks. Dozens of soldiers and civilians were reportedly killed in double attacks by Islamist militants in the north-eastern state of Borno, Nigeria. Militants attacked Monguno, a garrison town where UN and other humanitarian aid workers are based, and a village in Nganzaai.

The UN said they were shocked by the raids (the organization itself, however, has virtually ceased to play any significant role in Africa). The attacks came just days after at least 81 villagers were killed in Gubio.

The Boko Haram faction, which calls itself the Islamic State in West Africa, claimed to be behind all three attacks.

People from the village of Goni Usmanti in Nganzai told AFP News Agency that militants shot at least 38 people and set fire to a truck with passengers inside.

Learn more about the reasons for the rise in terrorism in Africa, and the possible solutions to the crisis in our material.

Terrorism in Africa: endless war and its alternative