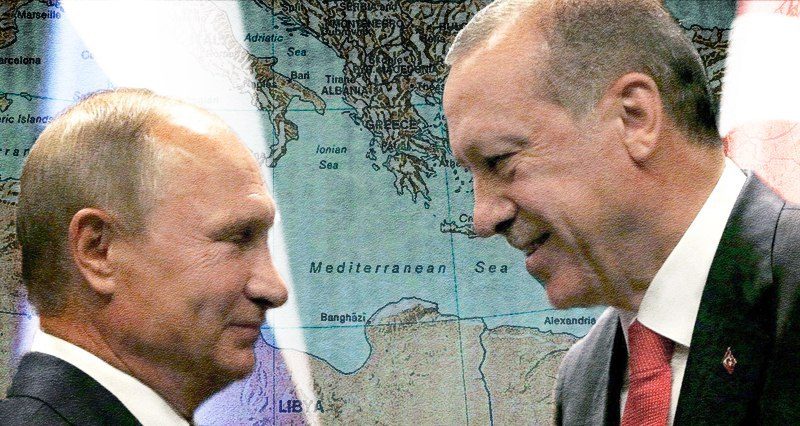 .#Erdogan, #Putin meeting in #Istanbul ahead of launch of #TurkStream https://t.co/KVyPfnc92Z pic.twitter.com/08prIU3Mfd

The Russian President also took part in the commissioning ceremony of the Turkish Stream gas pipeline. The presidents issued the Joint Statement on the major issues of bilateral cooperation.

Turkish Foreign Minister Mevlut Çavuşoğlu confirmed that the leaders of the two countries have called for a ceasefire in Libya and for the establishment of lasting peace in the country. “Our talks were aimed at establishing peace in Libya,” Çavuşoğlu added.

On January 3, the Turkish parliament voted to send troops to Libya to support GNA (Tripoli). The European Union, Italy, France, Britain and Germany called on Turkey to stop foreign intervention in Libya. At the same time, General Haftar’s troops began to advance towards Tripoli (thus, he managed to temporarily take an important strategic point – the city of Sirte – under his control). Sirte was partly taken by the LNA, and also the 604th brigade (consisted of madhalits) had taken the Haftar’s part.

The achievement of the agreement on Lybia crisis is a big result of the meeting: memorandum on the military cooperation, signed by Sarraj and Erdogan, in November 2019 and the further decision of Turkish parliament to deploy troops to Tripoli for the support of GNA, was a stumbling block for the stable relations between Turkey and Russia (which was rather supporting Haftar). The achieved agreements seems to be a ‘deescalation scenario’, which already showed its positive results in Syria. Still there are lack of the updated political agreement (the Lybian National Agreement, signed on the 17th December of 2017 become out of date facing the new extra-factors in the Lybian crisis: the reducement of the terrorist factor, the scheme of prolongation of the GNA mandate (prolonged till 2020 by UN Security Council in September 2019)).  Çavuşoğlu and Lavrov declared that the consultations between Turkey and Russia will be held regullary: the result of the collaboration can be the creation of the new Lybian political Agreement.

On October 9, Turkey launched “Operation Peace Spring”. The purpose of the operation is to force the Self-Defence Forces of the Syrian Kurds (YPG) to leave a 30-kilometre zone along the Turkish border. At the end of October, Erdogan and Putin agreed to stop the Turkish operation in Syria, and Ankara achieved the right to create a security zone in northern Syria. In December the Syrian Arab Army launched new phase of Operation  “Dawn of Idlib” against Islamists in Idlib. The threat for the Turkish outpost in Idlib emerged.

The results of the Turkish-Russian collaboration are positively appreciated by both sides. However the Kurdish separatism and the support of the radical Kurds by US and Israel exacerbates the situation. The installation of the Kurdish autonomy in Syria also is impossible, because of the ethnic composition of the North of Syria: the Kurds are not a majority there (only 1/3 of the population in Northern Syria is Kurdish). The US plan, based on the ‘Greater Middle East’ project, of the reconciliation of the Iraqi’s Kurdistan and the Northern Syria Kurdish region doesn’t take into consideration the difference between Iraqi’s and Syrian Kurds.

“We regard the U.S. operation against the Commander of the Quds Special Forces of the Islamic Revolutionary Guard Corps, Qasem Suleimani, and those around him in Baghdad on 3 January 2020, as an act that undermines security and stability in the region” (“Joint Statement of the Presidents of the Russian Federation and the Republic of Turkey”, issued after the meeting).

“In light of Iran’s ballistic missile attacks on coalition military bases in Iraq on January 8, 2020, we believe that the exchange of strikes and the use of force by either side does not contribute to the search for solutions to the complex problems of the Middle East and leads to a new round of instability without responding to anyone’s interests. We have always opposed foreign intervention and intercommunal conflicts. In this regard, we declare our commitment to de-escalation of tensions in the region and call on all parties to act with restraint, with common sense and priority for diplomatic means”.

On 3 January, the United States assassinated IRGC General Qasem Soleimani. Iran responded with the missile strikes on American bases in Iraq. On Wednesday night, the U.S. air base Ain al-Assad in western Iraq and the U.S. military facility in Iraqi Kurdistan, near the Erbil airport, were hit by a missile strike, launched by IRGC. Iranian media reported about 80 people killed, the U.S. denied this information. The murder of general Soleimani has caused strengthening of anti-American sentiment in the region: both among Shiites and Sunnis (Turkish authorities condemned the murder of Soleimani). On January 7, Iran recognized the Pentagon as a terrorist organization. Iraqi authorities decided to withdraw the US military contingent. In turn, Donald Trump threatened to impose serious sanctions against Baghdad, if his actions seem to the U.S. side “unacceptable.

Iran took & concluded proportionate measures in self-defense under Article 51 of UN Charter targeting base from which cowardly armed attack against our citizens & senior officials were launched.

We do not seek escalation or war, but will defend ourselves against any aggression.

Chronology of events on the eve of the meeting

Protests in Iraq: since October 1

On December 29, the United States struck at the positions of Kataib Hezbollah, a military formation supported by Iran

On December 31, disgruntled with U.S. policy took the American Embassy in Baghdad by storm

January 4 Iranian missile attack on the “green zone” of the U.S. Embassy

The consolidated position of Turkey and Russia regarding the question of assassination of Soleimani shows that both countries negatively appreciate the recent actions of the US in region. The US unilateral, irresponsible and aggressive actions push both Ankara and Moscow towards multipolar agenda and joint measures to curb the American influence for the sake of stability.

Turkey’s role in the de-escalation of the Iran-US tensions can be reinforced giving the stable and friendly relation between Ankara and Tehran.

“We are satisfied that our cooperation not only serves the interests of our two peoples, but also contributes to the solution of regional problems”

The Opening Ceremony of the TurkStream Natural Gas Pipeline https://t.co/UHTL7Ixlxq

On January 8, the “TürkAkım” was launched. The project, designed to supply natural gas from Russia to Turkey, as well as southern European countries, took almost six years to implement. The second line, designed for the European market, runs through Bulgaria, Serbia, Hungary and Austria. The construction of the pipeline with the length of 950 km and annual capacity of 31.5 billion cubic meters lasted two years.

The project makes Turkey an important energy hub between East and West.

“With the opening of Turkish Stream, the Turkish gas transmission system, already connected to the north and east, will become indispensable for the international market,” Turkish Energy Minister Fatih Dönmez said earlier. The U.S. imposed sanctions against the “Nord Stream 2” and “Turkish Stream” projects, explaining these measures by the need to ensure energy security in Europe. The sanctions concern individuals and companies involved in the construction of the gas pipeline.

“TürkAkım” consists of two strings with a capacity of 15.75 billion cubic meters each. The first one is designed to supply Russian gas to Turkish consumers, the second one – for Southern and South-Eastern Europe. On January 8 the official opening of TürkAkım took place. The ceremony was held in Istanbul. Serbian President Alexander Vučić and Bulgarian Prime Minister Boyko Borisov also took part in the ceremony.

The TurkStream strengthens both Turkish and Russian positions in the region as a new independent energy-pole. Cheap Russian gas will  seriously reduce the energy costs of production in Turkey, providing Turkish goods with an important competitive advantage in world markets.

From the point of view of international politics, through control of the TurkStream, Ankara will strengthen its influence in the Balkans and in Eastern and Central Europe right up to Hungary and Austria.

The project is hardly criticized by the US. The alternative project ‘EastMed’ (created by Israel, Egypt, Greece, Greek Cyprus) is an attempt to counter the TurkStream project and will be used by the US as a key factor for the concurrency of the TurkStream.