Report On Struggle With Terrorism In 2018 Published In U.S. 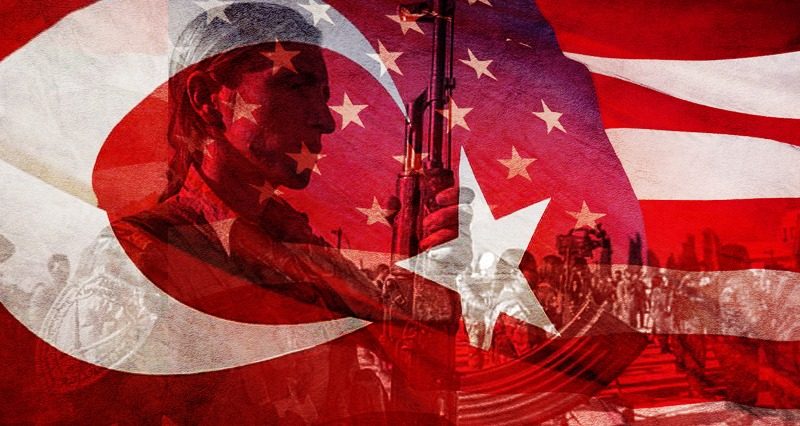 The U.S., which uses terrorist organizations in many countries of the world to achieve its objectives, thus causing death to thousands of people, and which plays the main role in splitting up other nations, has published the Annual Country Reports on Terrorism.

The document is noteworthy for the fact that the U.S., known for charging other countries – and primarily Iran – with support for terrorism, does not mention the Syrian branch of the Kurdistan Workers’ Party, the YPG, among the terrorist organizations. What is more, its authors have used the information obtained from the terrorists’ chieftain, the self-proclaimed general Mazloum Kobani.

Fetullah Gulen, who masterminded the treacherous coup attempt on July 15, 2016, and who is responsible for the death of 251 people, has been left out, too. The report mentions Gulen, the head of FETO terrorists currently living in the U.S. as a “self-exiled cleric”.

CRITICISM ON THE PART OF TURKEY

The Turkish Foreign Ministry’s official spokesman, Hami Aksoi, has commented on the Reports drafted by the U.S. Department of State.

“The report has acknowledged that the PKK, enlisted as a “Foreign Terrorist Organization” by the US, has been responsible for martyring more than 1200 security officials and civilians in Turkey during the period 2015-2018,” he said. “Using the expression “the PKK affiliated groups in Syria” instead of mentioning the YPG in name, is an attempt to cover up the unlawful position of the US authorities that do not hide their cooperation with this terrorist organization.”

Statement of the Spokesperson of the Ministry of Foreign Affairs, Mr. Hami Aksoy, in Response to a Question Regarding the US State Department Report on Terrorism of 2018 https://t.co/Td6Vmfbta3

As Aksoy commented on the passage of the Reports that mentions FETO, he said:

“[…] presenting the ringleader of FETÖ, another terrorist organization targeting Turkey, as “self-exiled cleric” signifies that the heinous July 15 coup attempt is either ignored or supported. It is also a manifestation of the effort to overleap the fact that this terrorist has found safe haven on US soil. It should not be forgotten that FETO terrorist organization, which is behind the heinous July 15 coup attempt that left 251 of our innocent citizens martyred and thousand others wounded, is not only a threat to Turkey but to all countries where it exists, and it should be known that the international cooperation in countering terrorism is of great importance.”

A scrutiny of the report’s contents reveals a truly shocking picture.

U.S. special envoy for struggle with terrorism, Nathan Sales who spoke about the Turkish Armed Forces’ operation in Syria, resorted to veiled threats once again. “We expect Turkey to abide by the commitments that it made to us […],” he said.

“[…] we are concerned about some of those groups that don’t have the same force discipline that the Turkish military does.”

In the course of the news conference, Sales was asked to comment on the situation around the opposition groupings, which Turkey cooperated with on the ground, and around the ISIS militants who had escaped from detentions after the Turkish operation.

Sales also spoke about the opposition groupings. “We are concerned about some of those groups that don’t have the same force discipline that the Turkish military does,” he said, adding that he would like “to reaffirm our call on Turkey to ensure that it complies and that its organizations with which it’s working complies with all the assurances made in the agreements with the United States.”

The envoy confirmed the figures and data on the ISIS fighters who reportedly escaped from jails after the Turkish operation in Syria.

“[…] we’re aware of about 100 fighters who escaped in the wake of the Turkish incursion into northeastern Syria.  In addition, as General Mazloum has said to President Trump, the majority of those people have been taken into custody again after having escaped. We expect Turkey to abide by the commitments that it made to us to ensure that any ISIS fighters that it encounters are kept in a secure manner and not allowed to return to the battlefield.” (Mazloum, a so-called ‘general’ mentioned by Sales, is, in fact, Mazloum Kobani, the head of a terrorist grouping accountable for the deaths of hundreds of people. Turkey has placed him on the list of wanted criminals.)

One of the facts mentioned at the news conference was that Abu Ibrahim al-Hashimi al-Quraishi had become ISIS leader after Baghdadi’s death. Nathan Sales confined himself to saying that regardless of ISIS leadership’s lineup the struggle with the organization would continue militarily as well as by blocking its finances. When a reporter asked him to what degree an attack of revenge for Baghdadi’s death was possible, he said: “We have to be prepared for any eventuality”.

Look at this picture. You will see your ally, this devil Mazlum Kobani is a vile terrorist. In my country a plenty of people was killed by this terrorist. pic.twitter.com/eFU9faxNqS

He was also asked about the possible new threats from ISIS in the future. Sales said it was important to pay special attention to “individual lone wolves” who might commit attacks on the power of ideological brainwashing “in the name of ISIS without any formal tasking or direction”. He pointed out the essentiality of using a broad spectrum of tools to rebuff ISIS’s “very diverse and dynamic threat”.

Turkey fighting with PKK, ISIS inside and outside the country, the report says.

The report indicates that, in 2018, Turkey “continued its efforts to defeat terrorist organizations both inside and outside its borders, including the PKK and ISIS” and it is one of the countries making a considerable contribution to the rebuffing of international terrorism.

One more factor mentioned in the document is that Turkey is “a source and transit country for FTFs seeking to join ISIS and other terrorist groups fighting in Syria and Iraq.” In addition to it, Turkey is an active member of the Global Coalition to Defeat ISIS and co-chairs the Defeat-ISIS Coalition FTF Working Group.

The report also says that, as of October 23, Turkey had about 70,000 individuals on its Banned from Entry List. Also, some 6,000 individuals had been deported from the country on suspicions of giving support to terrorists.

The PKK continued attacks on Turkish interests on the Turkish territory and abroad, while the Turkish forces were engaged in operations against the grouping inside the country, in northern Iraq and in Syria.

The report stresses the assistance for counteraction to PKK terrorism that Turkey continued getting from the U.S. In November, the U.S. included three PKK senior warlords in the Rewards for Justice program offering up to $ 12 mln for information on their whereabouts.

FETO NOT LISTED AT TERRORIST GROUPING BY U.S.

The report states that the Turkish government declared Fethullah Gulen’s movement to be the ‘Fethullah Terrorist Organization’ (FETO) following the abortive coup attempt of July 2016. In the meantime, “FETO is not a designated terrorist organization in the U.S.”

The document says along with it that this decision taken by the Turkish authorities led up to “[…] continued detentions and arrests of Turkish citizens as well as foreign citizens resident in Turkey – including U.S. citizens and locally employed staff at the U.S. Mission to Turkey – for alleged FETO or terrorism-related links, often on the basis of scant evidence and minimal due process.”

“Turkey has a broad definition of terrorism […]”

“Turkey has a broad definition of terrorism that includes crimes against constitutional order and internal and external security of the state, which the government regularly used to criminalize the legitimate exercise of freedom of expression and assembly,” the report says.

Turkey has sent 90 boxes of court resolutions to US regarding the FETO terror organisation but US has not extradited its leader Fethullah Gulen – Turkish President Erdoganpic.twitter.com/j9DQuT2epK

It also quotes the Office of Turkey’s President as saying that prior to December 11 the government carried out 1,206 operations against ISIS and arrested 854 suspected ISIS members. “Turkey will sometimes deport suspected foreign terrorist fighters without providing advance notice to the destination countries,” the document says.

“Marxist groups, including affiliates of the Kurdistan Workers’ Party, also operated on Syrian soil, presenting a security concern for Turkey”

The section of the report devoted to Syria claims the Assad regime’s policy has provided for the strengthening of ISIS and Al Qaida’s positions on the Syrian territory, as well as the positions of foreign terrorists linked to them.

“The Syrian government’s awareness and encouragement for many years of terrorists’ transit through Syria to Iraq for the purpose of fighting U.S. forces before 2014 is well documented,” the document says. “Those very networks were among the terrorist elements that brutalized the Syrian and Iraqi populations in 2018.”

Members of pro-Shiite militias, including those listed by the U.S. as terrorist groupings, continues getting into Syria to fight on the side on the Assad regime, the report says.

The ‘Syrian section’ says at the end without mentioning the YPG self-defense units or the Syrian Democratic Forces affiliated with them that Turkey is troubled by the operations of Marxist groupings on Syria’s territory.

ISIS HAS PROVED ABLE TO ADJUST TO NEW CONDITIONS

The report says that although ISIS has lost control over the territories in Syria and Iraq and the international coalition has scored notable achievements, the terrorist organization has shown an ability to adjust to new conditions.

Nathan Sales, who wrote the introduction for the 332-page document, says the U.S. and its allies have moved ISIS out of the areas totaling 100,000 sq. km in Syria and Iraq and thus have laid the groundwork for destruction of the ‘caliphate’ in 2019.