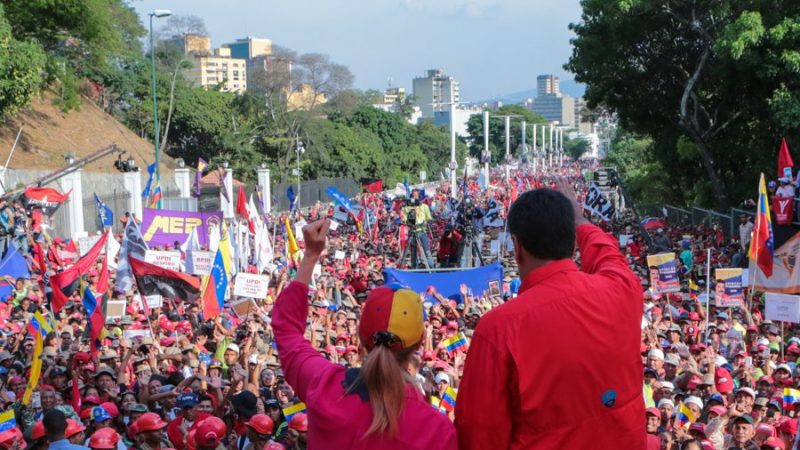 In Venezuela on April 30, a shootout took place between opposition and government forces in Caracas. In the course of the protests, more than 70 people were injured and some 80 were arrested.

Opposition activist Juan Guaido called for the coup d’état in a video message posted to twitter, after which point riots began. Security forces tried to disperse those who had gathered with tear gas, but were met with fierce resistance and gunfire from a small number of defected soldiers.

in January, the leader of the Venezuelan opposition, Juan Guaido, declared himself the country’s interim president. He was supported by the United States and most European countries. Maduro, however, says he will not abdicate outside of the country’s legal framework.

Some of the countries shaping the anti-Atlantic axis, including Turkey, have strongly condemned the coup attempt. Turkish President Recep Tayyip Erdoğan tweeted:

“We condemn the attempted coup d’état in Venezuela as a country that fought the blows and survived the negative consequences of these blows. The whole world must respect the democratic choice of the people in Venezuela.”

In agreement with the  statement, Arreaza commented: “We thank President Erdoğan for his strong and open support for international law and peace and for his respect for democracy in Venezuela.”

Russia also hinted to the United States that it was opposed to possible military intervention in Venezuela. Following the escalation, Mike Pompeo and Russian Foreign Minister Sergey Lavrov discussed the situation in Venezuela. The Russian side stressed that the continuation of aggression against Venezuela could have serious consequences.

“The vice president shouldn’t be interfering or inciting violence with Guaidó,” Khanna said during an interview on MSNBC

“What we should be doing is deferring to the Pope to have a negotiated settlement or Uruguay or Mexico,” he continued. “It looks like the United States is inching into yet another bloody conflict and this is not going to be easy.

The Vice President has no place inciting violence in Venezuela. We cannot allow ourselves to contribute toward a civil war abroad. Instead, this is the moment for diplomacy and restraint. pic.twitter.com/A4ZPTPbUDX

The United States has been turning up the pressure on Venezuela  in order to gain control over the country and therefore, gain additional geopolitical and economic points in the region. In addition to the coup attempt and demonization in the media, a sanctions regime continues to be leveled against the country. The economic blockade includes keeping Venezuela disconnected from the Swift system which forces Caracas to use alternative currencies in order to participate in global trade.

On January 28, the United States announced the introduction of sanctions against the national oil and gas company of Venezuela, PDVSA.

That evening, it became known that Venezuela was already considering options for protection (perhaps in court) of its assets abroad, which are currently blocked by banks due to the threat of sanctions from the United States. Euroclear bank in the UK is blocking more than a billion dollars in state funds, and the Bank of England is also blocking the country’s gold. Meanwhile, the US had openly admitted to funding Guaido’s campaign.

As multipolar power begins to form across the globe and increased collaboration between friendly countries like Turkey, Iran, China and Russia continues, Venezuela has a good chance to get back on its feet. The effort, however, requires investment and mutual support.

At home, Maduro is a legitimate president, as confirmed by the massive rallies in support of the president seen on the streets, incomparably bigger than Guaido’s protests.