ISIS, the US Army and Rasmus Paludan 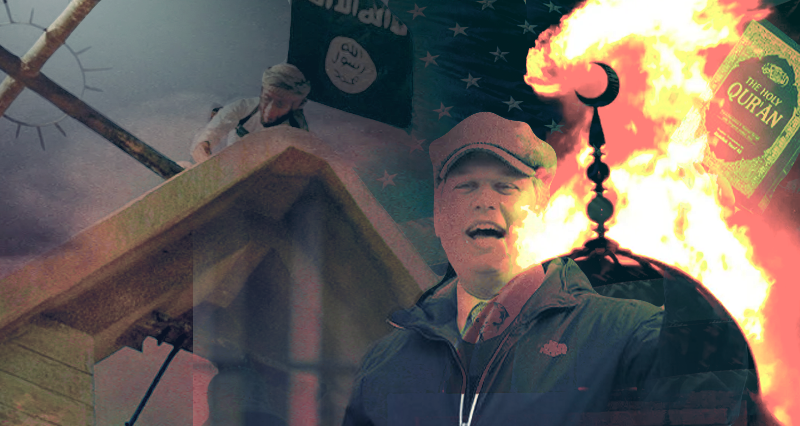 In Sweden, a person named Rasmus Paludan burned the Holy Quran in front of the Turkish Embassy in Stockholm under police surveillance.

The Swedish government described the incident as a manifestation of freedom of expression.

The goal: Clash of civilizations

In many parts of the Middle East, especially in Iraq and Syria, ISIS has set houses, shops and churches belonging to Christians on fire under the pretext of Jihad. It massacred thousands of people.

From a broad perspective, it is clear that ISIS, the US military and Paludan are all serving the same goal, Samuel Huntington’s famous thesis: the Clash of Civilizations.

Whatever pertains to humanity’s culture of coexistence is being systematically and persistently targeted in all corners of the world.

The same goal underlies the destruction and burning of thousands of years of civilized cities and places by the US and the jihadists it backs in the Middle East, where Muslims and Christians have developed a culture of coexistence.

What they impose instead is a “global village” consisting of rootlessness and depersonalized individuals.

New Middle Ages in the West

The US’ attempt to sever ties between Russia and Europe through the Ukraine war can also be regarded as part of this plan.

Leaving aside the geopolitical side, the socio-cultural goal is to throw the intersections between Europe and Asia, West and East into chaos and to blow up the bridges that link humanity.

In this way, they want to create isolated and backward societies.

This is exactly what is happening in the West today.

In Western capitals that are increasingly retiring into their shells: In the pretense of freedom of expression, books by Russian authors are banned and the Koran is burned.

The West, now in the new Middle Ages, has abandoned rational thinking and is driven by fanaticism.

A similar attitude against the Muslims also goes for the Russians.

For the West, everything foreign to it has become the enemy.

In such a society, science, art and reason cannot advance.

As long as Western peoples do not rebel against their ruling classes, the backward course is likely to deepen.

Against all odds, Eurasia persists as the bridge between the West and the East.

In this context, Türkiye’s position is of a strategic one. And because of this precious position, it is persistently targeted by fanatics in the West and the East.

This is the reason why Paludan chose the front of the Turkish Embassy to burn the Koran and why ISIS/PKK and alike are insistently targeting Turkish territory.

On the other hand, a renaissance is unfolding in the center of Asia.

Not only Europe and Asia, but also Africa and even Latin America are considered as parts of this initiative.

Back to where we started…

Today, Eurasia is a moment where humanity is resisting the West, which is trying to impose a new Middle Ages on the world.

Those who burn books will surely lose…