Rise and fall of the US attack on West Asia and North Africa 2: The US and PKK in panic 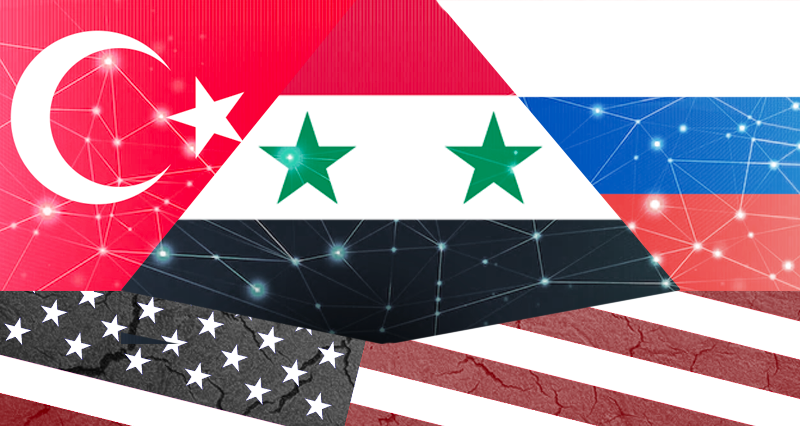 In 2005, in Türkiye chaos erupted on the streets on the pretext of the Nevruz event. In France, the deaths of two Muslim youths in an electrical current while fleeing from the police triggered months of street protests and dozens of workplaces, schools, state institutions and cars were set on fire. In July, in the Egyptian tourist center of Sharm el-Sheikh, three al-Qaeda bombings were carried out simultaneously on a hotel, a shopping mall and a crowded taxi stand. 88 local and foreign people were killed, and hundreds of people were injured. On July 7, three men detonated explosives at different points on the London underground. 1 hour later, a fourth terrorist carried out a suicide attack on a bus: 52 people were killed and 770 people were injured. Condoleezza Rice, Co-Chair of the Broader Middle East and North Africa Initiative (BMENA), visited Israel in June 2006 as secretary of state and announced the dawning of BMENA to the world from Tel Aviv.

In July 2006, Israel attacked Lebanon with all its military might from sea, air and ground. Israel wanted to hand Lebanon over to its collaborators by dealing a major blow to the Shiite Lebanese Hezbollah and its Sunni, Christian and Druze allies in the field because they were considered the most robust shield of Iran, Iraq, Syria and Palestine and an obstacle to BMENA.

After 33 days of war, Israel was severely defeated. Hezbollah carried the war into Israel. Israel and its supporters were rocked. There was a serious deterioration and fear within “the legendary Israeli army – God’s chosen and omnipresent ones – which has given the Arab armies a rough time”. In the command center of Israeli intelligence and military, talk of the presence of spy cells in service of Hezbollah began to circulate.

BMENA was impossible without the fall of Syria

Syrian and Iranian officers and arms played a strategic role in this war and this made a major breach in BMENA. Without destroying the weight Syria carries in the region, weakening its state, army and nation, BMENA would not have a chance to survive. For those who don’t know: It might be difficult to imagine in today’s conditions, but Syria was a trademark not only in military security but also in economy, society, culture, sports, education, health, textile and pharmaceutical industry, cinema, agriculture and religious tolerance.

And the masterminds of BMENA understood that things would not go well without turning this country into a blood bath. They brought twice the democracy, prosperity, justice and social peace to Syria in March 2011 with the “Arab Spring” they brought to Afghanistan and Iraq. This time they attacked Damascus, the heart of our region, using all their scorpions near and far.

The plot of the ‘Second Israel’

Did Damascus experience the manifestation of the Prophet Muhammad’s prayer for Yemen and Damascus, did it witness the miracle of “everyone has an agenda, but the ultimate one is Allah’s”, or did it survive thanks to human determination, courage, sacrifice and love for the homeland, as well as the intervention of complex political dynamics: Only Allah knows that. But in any case, we witnessed the manifestation of the word “Allah is the protector of Syria”.

History has rarely borne witness to such a war of terror and malignant plots. It took more than a miracle to break out of this malignant circle of fire. They were to establish Second Israel (under the guise of Kurdistan) and under the auspices of Türkiye. The plan similar to that imposed 100 years ago on Palestine, the Southern province of Damascus, which ended up with the establishment of the First Zionist Jewish Israel, was to be implemented in the Northern provinces of Damascus this time. Thus, this malign purpose was to be achieved in a territory stretching from western Iran, northern Iraq and Syria and the heart of Anatolia to the Gulf of Iskenderun, that is, to the Mediterranean Sea. They were purportedly going to make Mr Erdogan and his government an exemplary model for Arab and Muslim countries.

According to masterminds of BMENA, Iraq and Syria were to be preoccupied with sectarian and ethnic conflicts, Kurdistan was to be built on their territory thanks to the Erdogan government and the local administrations and municipalities in the region “Kurdistan in Türkiye” were to be handed over to the PKK/HDP (People’s Democratic Party). According to BMENA, while neighboring countries were being divided, Türkiye was going to be protected, and the “Kurdish issue” was going to be settled. Mr Erdoğan, Abdullah Gül, Fethullah Gülen, Ahmet Davutoğlu, Bekir Bozdağ, PKK/HDP and other large and small parties have systematically propagated this target with fancy and false discourses. The spin-doctors of the world’s most obsequious and deceitful media, which echoes the voice of their masters, served this project with the most barbaric sectarian and ethnic discourses. But in reality, the masterminds of the international terrorist attack on Syria in 2011 targeting sectarian and ethnic divisions saw Mr. Erdogan simply as a collaborator and bulldozer to open the way for them. All their other promises were nothing but a big lie.

US intent was quite different from Erdogan’s

The two most obvious incidents of the crisis between Mr. Erdogan and the US were that Obama refused to accept Mr. Erdogan’s demand to build safe-buffer zones in Syria through military intervention carried jointly by Türkiye and the US and Mr. Erdogan’s claim that the Syrian army used chemical weapons. On May 11, 2013, 6 days after the terrorist attack in Reyhanlı, a town on Türkiye’s border with Syria, Mr. Erdoğan flew to Washington with Hakan Fidan, the head of the National Intelligence Organization, to meet with President Obama. Mr. Erdoğan was very disappointed with Obama’s negative attitude towards his demands. Speaking to the press after three hours of talks, despite that Mr. Erdogan said that they agreed with the US on many issues, Mr. Obama stated in his speech that Assad must be eliminated, but that other allegations needed to be investigated further.

The US did not want Mr. Erdogan to intervene in Syria “more than need” and undertake a separate mission by himself. Erdogan had to do as he was told and not question beyond that. The US objective was to deploy ISIS into the areas along the Syria-Türkiye border and portray YPG/PKK as heroes fighting against the darkest and most barbaric organization in history. The US wanted to form the public opinion that PKK/YPG is secular, modern and democratic by integrating Arabs and Assyrians -who constitute the region’s large population- with it, and by bringing female militants to the forefront. It aimed to ensure that YPG/PKK controls the oil, agricultural and water resources and that the Syria-Northern Iraq route is under the rule of this organization.

Türkiye foiled the plot together with Russia

US-linked forces within Türkiye attacked Mr. Erdogan, who now began to constitute a problem for Washington. The US wanted Mr. Erdoğan to become helpless and needy through many interventions such as bribery, wiretap espionage, the plot of Ahmet Davutoğlu in the June 7, 2015 election, and the coup attempt on July 15, 2016. Mr. Erdogan made his strategic move by making peace with Putin. Doğu Perinçek and the Turkish generals who have come out of the prisons of the conspiracy in the so-called Ergenekon coup investigation have contributed a lot to the normalization and development of the relations between the two countries. Having restored relations with Moscow, Mr. Erdoğan intervened BOP’s Second Israel Project (Kurdistan) through the Initiative of Sunni-land. He obstructed the desired corridor extending from Iraq to the Gulf of Iskenderun. Russia stood behind this smart move.

The US/Israeli plan was to surround Türkiye with three different Kurdish entities and to establish within the country local governments and municipalities that were connected to these and separated from Ankara with the so-called Kurdish opening or reform process. And Ankara was to learn a lesson the hard way: setting its neighborhood on fire, it was going to burn itself.

The survival of Damascus was crucial for Ankara to survive the destruction. Damascus not falling has upset the masterminds of BMENA and was a breakthrough for regional and international politics.

The US and PKK in panic

The Astana and Sochi process between Russia, Türkiye and Iran, was crowned with the meeting in Moscow between Russia, Türkiye and Syria. After 11 years, the Defense Ministers and Intelligence Chiefs of Russia, Syria and Türkiye came together. Foreign Ministers will meet in January. Then a Putin-Erdogan-Assad summit is expected. The US, PKK and their supporters are in a great panic. Efforts to sabotage this process that has begun between Moscow, Ankara and Damascus have accelerated. Fethullah Gulen Terrorist Organization (FETO), PKK, ISIS, Hayyet Tahrir al-Sham and many components of the Free Syrian Army (FSA) are calling for an “alliance to fight together against the ‘three enemies’”. Opposition parties and media in Türkiye are silent in the face of these historic meetings. Ahmet Davutoğlu and Ali Babacan are giving the message that “we are committed to our mission for BMENA”. HDP President Selahattin Demirtaş appreciates Ali Babacan. PKK dreams of a collaborationist government that will liquidate Atatürk’s Republic and the national democratic revolutions, fight effectively against Russia, and ensure the survival of the US and PKK presence in Syria.

The burden of Erdogan

Mr. Erdogan and his government are still shouldering the burden of Syrian opposition and its armed organizations, which are firmly hostile to Assad. There is a large group of people who benefit from the legal and illegal border trade between the two countries worth billions of dollars. The Syrian army’s deployment on the Turkish border and its control of customs and border gates will cause them great discomfort. They have significant influence over the bureaucracy, the military and the intelligence service and were an obstacle to Mr. Erdogan’s normalization with Mr. Assad, but the law of “necessity over preference” came into play. This is why a broad front has formed, consisting of influential circles in the US, EU, Israel and their supporters and collaborators, FETO and PKK. Of course, this front includes those who are unhappy with the economic, social and cultural policies of the Erdoğan government. The US brought together all separatist organizations in Northern Iraq. It lifted the arms embargo on the Greek Cypriot Administration of Southern Cyprus and initiated efforts for its admission to NATO. The US has targeted Türkiye, Syria, Iran and Russia with internal and external attacks. Our region may face great threats and wars. But no threat and war can compete with the union of forces of Russia, Türkiye and Syria. They were going to rise with their plans on Syria, but they were disgraced.

* Prof. Dr. Mehmet Yuva is President of the Türkiye-Syria Friendship Movement and Coordinator of the Turkish Language Institute at the Damascus University, Syria

This article first appeared in the Turkish daily newspaper Aydınlık. Translation by UWI.