With Syrian-Turkish rapprochement, the autonomous entity “will not remain one piece” 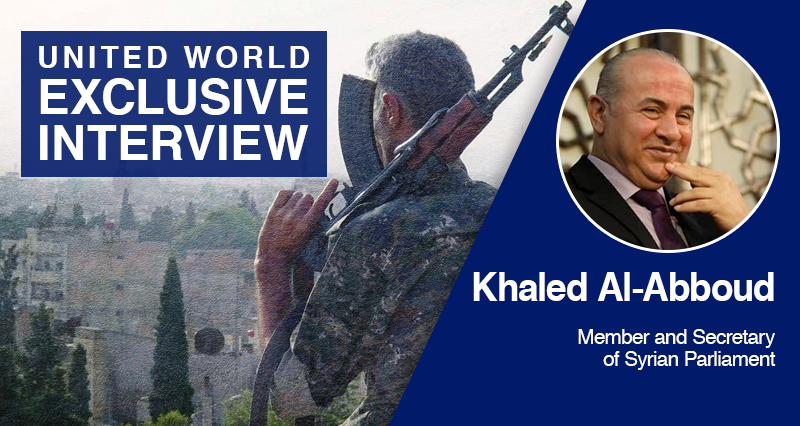 Turkish-Syrian rapprochement is continuing in a fast speed. It is expected that a bilateral foreign minister meeting will take place very soon under Russian mediation.

Both sides have stated that struggle against terrorism and the dealing with the challenge of migration constitute important topics, as well as efforts of regional autonomy in the northeast of Syria.

Representatives of the US White House and State Department have criticized the meetings and any attempt to elevate diplomatic relations with the Assad Government in Syria.

Asked whether “the Kurds will pay the price for Turkish-Syrian reconciliation”, White House National Security Council Coordinator for Strategic Communications John Kirby stated: “The short answer is: No”.

We spoke with Khaled Al-Abboud on these topics. Al-Abboud is both member and secretary of the Syrian People’s Assembly. Al-Abboud is also member of the political bureau of the Socialist Unionist Party, which is part of the Ba’ath-led National Progressive Front.

What do you think of the American plans for decentralization in Syria?

We have the necessary tools to foil division and decentralization. We know how the American administration and the previous ones think. We are fully aware of their long-term goals in Syria and the region. They never base their stances on human value, but rather on self-interest.

This is why we are resisting this policy in defense of the interests of our people. We believe that this resistance has produced important results and has thwarted the American administrations’ steps in more than one incident and more than one scenario.

We will not allow the United States to implement its project to weaken Syria or to divide it. The US has been trying for years to achieve that goal, and its recent attempts focusing on the concept of “decentralization” in Syria, are nothing but a form of division. On that way, they want to exercise control over Syria’s central government and decisions.  It is an attempt that will fail since we have prepared the tools to confront any US endeavors aiming to undermine the unity of the state or its central authority.

What do you think of the so-called autonomous region in northeastern Syria?

If we mean by autonomy in northeastern Syria a political body, then it is rejected completely and in all aspects. But if we mean by it self-government and local administration, as it is determined by Syrian law – this law gives complete independence to the provinces, cities and regions to manage their own affairs, and run their own local matters – we propose to emphasize it more.

We believe that the attempt of some to establish an autonomous region in northeastern Syria is not at all different from the concept of division that Iraq was subjected to. We completely reject it. It will never pass.

Meetings between the Syrian government and Türkiye have started off. The United States criticized them. What is your message towards Washington?

The US wants to serve its interests via this rapprochment

We do not believe that the United States is against the essence of this approximation. It forms an important regional issue. But the US shows kind of criticism to improve its regional conditions.

We believe that the current administration is searching for a formula of approach Damascus. This might be via Türkiye or some Arab regimes. For Washington, behind its criticisms there is an urgent need to contribute to shaping the “stability” of the region in a way that serves its minimum interests, may these be focused on oil vis a vis the presence of “Israel”!!

My message to Washington: I remind them that a new global stage has been set. This particular stage does not allow them to lead the world alone. The US must differentiate well between the meanings of ambitions and interests. Many can take its interests into account, but its ambitions will certainly be faced with great international opposition!!

The Kurdish entity a “very deficient and poor concept”

What are the consequences of these Syrian-Turkish meetings with regard to Kurdish autonomy?

In my estimation, what is being marketed as “Kurdish autonomy” is a very deficient and poor concept. It includes the objective meaning of this “entity”: it is essentially supposed to be used as a political file by Washington against the Syrian unity. The behavior of Washington does not reflect an objective reality for many reasons very well known at the level of the region and its population structure.

Therefore, the existence of this “entity” is linked to the circumstances of the region and not to the ability of the “entity” itself. Definitely, any Syrian-Turkish rapprochement will not leave this “entity” as one piece.

Meetings are valuable for the safety of the region

What are your general expectations from the Damascus and Ankara meetings?

The Damascus-Ankara meetings will develop, and there will be a great rapprochement, given that the governments of the region, including Damascus and Ankara, all need to search for a security equivalent that guarantees the “stability” and “security” of the region.

This “stability”, and “security” will provide a convenient climate to contribute to the protection of the interests of all countries in the region.