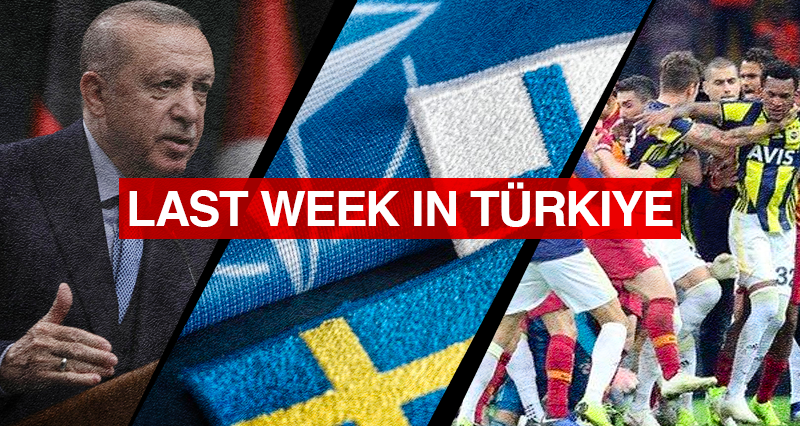 The public agenda in Turkiye was been relatively calmer for the first days of the New Year, when compared to the previous year.

The Turkish President Recep Tayyip Erdogan has welcomed the new year with his speech on the climate change.

The contradictions over the NATO membership of Sweden and Finland has started to deepen between Turkiye and other NATO members.

And finally Galatasaray has won over its rival club Fenerbahce, scoring three goals.

Türkiye is doing its part in the global fight against climate change, the country’s President Recep Tayyip Erdogan said on Monday.

“It is clear that the destructive effects of the climate crisis demand more collective efforts. Climate change and the problems it causes are common problems of humanity,” Erdogan said in a video message to the special International Climate Conference hosted by the UN and Pakistan in Geneva.

Referring to devastating floods that swept through a third of Pakistan last year, leaving 1,700 dead, Erdogan said this disaster “once again revealed the devastating effects of climate change.”

“The fight against this disaster and others like it must be conducted in solidarity within the framework of a strategy,” Erdogan said.

Climate-resilient reconstruction in disaster-prone areas and flood-affected areas in Pakistan will avert new suffering, he added.

Expressing Ankara’s readiness to help in reconstruction by meeting urgent needs of disaster victims in Pakistan, the Turkish president said: “The Disaster and Emergency Management Authority (AFAD) and our non-governmental organizations also show all necessary sensitivity in the delivery of humanitarian aid.”

Türkiye has supported Pakistan in the past, as well as in these difficult times, and will continue to do so, he underlined. “We have dispatched 7500 tons of humanitarian aid materials on 15 flights and 13 trains.”

He also noted that Turkiye has sent two ships carrying more than 1,630 tons of humanitarian aid, expressing hopes that “once those ships reach the ports, the suffering of our Pakistani brothers and sisters will be mitigated to a certain degree.”

Erdogan once again conveyed his best wishes to the Pakistanis, condolences to families of victims, and a speedy recovery to those injured in the floods.

Erdogan finally stated that Turkiye fulfills its responsibilities in terms of contributing to this global struggle.

Turkish objections to Sweden and Finland’s NATO membership are continuing

Ankara continues to object the two countries’ NATO membership due to their support for the PKK, FETO and other terrorist organizations that act against Turkiye and its refusal to extradite terrorism members back to Turkiye.

Sweden made a new statement on this hot topic.

While negotiations are continuing between Sweden, Finland and Türkiye on NATO membership, Swedish Prime Minister Ulf Kristersson spoke about the ongoing talks. Kristersson asserted in his speech at the Society and Defense Conference in Sweden, that Türkiye has made some demands on NATO membership that Sweden cannot accept, saying, “Türkiye confirms that we are doing what we have promised, but also wanting things that we cannot promise. We cannot meet all of Türkiye’s demands.”

Prime Minister Kristersson stated that they do not know when Türkiye will decide to grant Sweden NATO membership, and said that the decision will depend on Türkiye’s domestic policies and Sweden’s capacity to show its seriousness on the question.

On the eve of the NATO summit in June last year, Finland signed a Tripartite Memorandum between Sweden and Türkiye, which pledged to take tougher steps against terrorist organizations.

Sweden and Finland applied for NATO accession in February last year, ending decades of neutrality, citing the “Russian threat” as their excuse. Türkiye, on the other hand, vetoed the memberships of Finland and Sweden, which it wanted to take tougher steps against terrorist organizations

The game, which was broadcasted by more than 200 domestic and foreign media outlets , was won by Galatasaray with a clear score of 3-0.

The details of the match are as follows;

The goals that carried Galatasaray to victory against Fenerbahçe, came from Sergio Oliveira at 32. minute, Kerem Akturkoglu on an assist from Mauro Icardi at 78. minute, and from Mauro Icardi at 90+10 extra time. Fenerbahce’s Irfan Can Kahveci was sent off the field at 86. minute with a direct red card.

At the end of the match, Galatasaray maintained its lead at the league, by taking another 3 points, with a 4 points difference with its closest rival Fenerbahçe.