First official steps after 11 years between Syria and Türkiye; Assassination of a nationalist politician; New Year messages from politicians 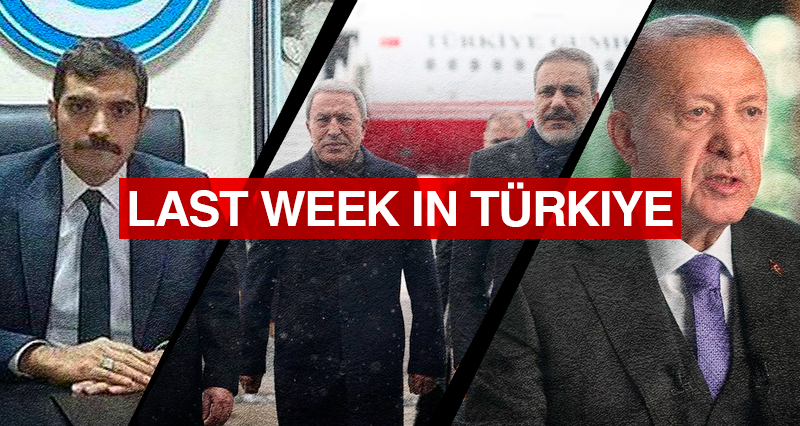 At the turn of the New Year, Türkiye’s agenda remains intense.

Turkish and Syrian officials met in Moscow to overcome the ongoing political dispute between the two countries since the start of the civil war in Syria.

The busy agenda in Türkiye continued as we entered the new year.

In a central location of the capital city Ankara, Sinan Ateş, the previous chairman of the Nationalist Movement Party’s Youth Branch, Ülkü Ocakları, was shot dead.

And new year messages from politicians…

Normalization steps between Syria and Türkiye

Perhaps the most important political development of the week in Türkiye was the meeting between Turkish and Syrian officials in the Moscow.

Minister of National Defense Hulusi Akar, Head of the National Intelligence Organization Hakan Fidan and their counterparts from Russia and Syria took part in the meeting.

It was reported that the meeting addressed “the Syrian crisis, the refugee problem and the joint fight against all terrorist organizations in Syria”.

As a result of the meeting, it was agreed to “continue the trilateral meetings in order to achieve and maintain stability in Syria and the region as a whole”.

Hulusi Akar stated that they exchanged information and opinions on the refugee problem and the fight against all terrorist organizations in Syria:

“We have done our part to ensure and maintain peace, tranquility and stability in our region. We will continue to do so from now on. There is no question of us doing anything against our Syrian brothers and sisters living in Türkiye and Syria. We have never and never will consider behavior that would put them in trouble. Everyone should know this and act accordingly.”

Turkish Foreign Minister Mevlüt Çavuşoğlu made the following statements on the subject:

Before Türkiye, Syria and Russia met in Moscow, President Erdoğan had shared the following details on the roadmap for normalization:

Foreign Minister Çavuşoğlu announced that a new meeting between the delegations is being planned in mid-January.

Assassination of nationalist politician in Ankara

There have been many detentions regarding the assassination.

2 people on a motorcycle carried out the attack. It was reported that the suspect driving the motorcycle was captured.

AKP spokesperson Ömer Çelik made the following statements in his speech on the subject:

“We offer our condolences to his family. None of the comments made after this heinous attack should be given credit. The attitude of those who try to make politics over death is not moral. The security forces and the judiciary will reveal all the details of this matter. We have determined that some people linked to organizations abroad are trying to target the People’s Alliance, as if this issue will be covered up.”

The statement made by Ankara Governorate is as follows:

“One person who is considered to be one of the perpetrators of the murder of former Ülkü Ocakları President Sinan Ateş, and two other people involved in the incident were taken into custody. Investigations are ongoing for the capture of other perpetrators.”

It was reported in the press that the suspects said “we did it for money” in their first statements.

On the other hand, it is noteworthy that the Nationalist Movement Party has not yet made a statement.

“I would like to re-emphasize that we have finished 2022 with gains outstripping our troubles, just like the last two decades. We will inshallah launch a much greater initiative in 2023 with our Century of Türkiye vision befitting the new century of our Republic.  Our goal is no longer to rank in the top tier of the global political and economic league. Our goal is rather to obtain the political and economic strength that will put us among the very top of the top tier. (…) We have not abandoned or left alone our nation in the face of the high cost of living. (…) On October 29, 2023, we will inshallah be able to live the centenary joy of the inauguration of the Republic with enthusiasm, as we have dreamed it. The year 2023 is also the milestone of a promise we made to our nation 12 years ago.”

“Just as the centers that had emerged against Türkiye lost in 1923, malicious domestic and foreign circles, disgraced political mentalities will lose in the same way in 2023. The winner will be Türkiye and the Turkish nation.”

In a video posted on his social media account, CHP Chairman Kemal Kılıçdaroğlu stated the following:

“My dear people, 2023 is coming. Erdogan’s palace is in panic. Erdogan sees what awaits him; he gets scared and clings to our solutions. 2023 will be quite a different year. We will come to power, and as soon as we do, hundreds and thousands of solutions will come into play, from the biggest problems to the smallest ones.”

“Dear Comrades in Arms and Colleagues,

As we leave behind a year in which you fulfilled your duties with great success and sacrifice, we, as the Ministry of National Defense family, are preparing for 2023 with increasing faith and enthusiasm. We are going through a period in which global and regional developments are accelerating and security concerns have reached the highest level due to increasing risks, threats and dangers. In this delicate process, we are closely monitoring all developments and endeavor to take all kinds of measures regarding the defense and security of our country and our noble nation.

Our fight against terrorism continues uninterruptedly at an increasing tempo against all terrorist organizations, especially FETÖ, PKK/PYD-YPG and DAESH, with the strategy of “Wherever the terrorist is, there is our target.” Since the end of the Solution Process on July 24, 2015, a total of 37,312 terrorists have been neutralized in Türkiye, Iraq and the north of Syria, and 4,009 terrorists since the beginning of this year.”

“We are entering not an ordinary year, but an epoch-making year.

In fact, the new era has already begun before the year 2023. The meeting of the Turkish, Russian and Syrian defense ministers in Moscow heralds not just a new year, but a new era.

West Asians are taking the destiny of West Asia in their own hands.

The future of the world is in the hands of states seeking independence, nations seeking liberation and peoples seeking revolution.

West Asia is the front line. In fact, the continent that makes history is Asia itself.

The rise of Asia has made its mark on 2023.  (…)  Let the drums beat, let the flags fly high, 2023 will be the year of the establishment of the National Government of the Producers.