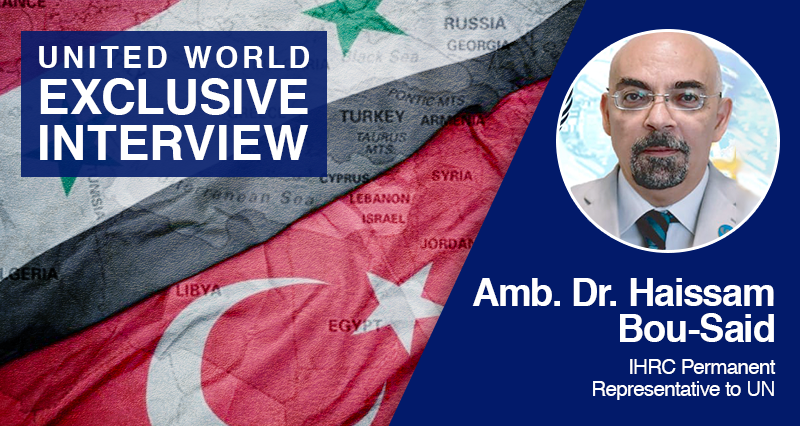 The year 2023 began with an important diplomatic turn. After 11 years of interrupted diplomatic relations, defense ministers of Türkiye and Syria came together in a trilateral meeting in Moscow.

Speaking to United World International, Syrian Member of Parliament, Dr. Nabil Toumeh said if conducted with “mutual understanding and respect, these meetings could help fight against the hypothetical Kurdish extremism”.

Ambassador Dr. Haissam Bou-Said confirms that the meetings will deal with Kurdish organizations that, from Syrian point of view, occupy oil resources and from Turkish perspective constitute an existential threat. He is the Permanent Representative of the International Human Rights Council (IHRC) in the United Nations in Geneva. The IHRC is a committee under UN /ECOSOC special status. Bou-Said is also advisor to the Lebanese Minister of Displaced.

Bou-Said goes a step further and says the Turkish-Syrian meetings and rapprochement process will have effects far beyond the country’s bilateral relations.

We interviewed Ambassador Dr. Haissam Bou-Said over the phone.

What is your basic expectation of the meetings between Turkish and Syrian government representatives?

There is no doubt that any meeting between two fighting poles is very important and must be supported. All obstacles that may stand in the way of rapprochement and understanding between them should be removed, especially if this rapprochement happens between two neighboring countries that share multiple history, geography and cultures, such as the Turkish and Syrian states.

After we followed the atmosphere of the Turkish and Syrian meeting in Moscow at the level of the defense ministers, we see that this matter will first reflect the defeat or reduction of the terrorist acts that cause concern to these countries. And of course, it will have effects extending to many countries and across the seas.

The upcoming meeting of the foreign ministers of the countries implicitly is also important. Here, all the details of the relations between the two countries will be discussed, based on the military and security concept that they elaborated: To establish bilateral guarantees between them, which may be, according to what we are about, a Turkish withdrawal from northern Syria and the handing over of the reins to the Syrian forces with Russian support.

Which topics are in your observation brought on the agenda in these meetings?

The main points dealt with the takfiri groups that pose a threat to the security of the two countries, as it became clear to all parties in northern Syria that these groups are benefiting from the conflicts between Ankara and Damascus in order to float themselves and their intercontinental program, which has never been compatible with the direction of the two, the Syrian and Turkish governments.

There are basic points that have been discussed in terms of ways of permanent coordination between the concerned agencies in order to ensure mutual security between them.

The Kurdish issue was also among the pickings raised by the two sides, each according to its own agenda in this regard. The Syrian government has oil rights that are currently under Kurdish dominance, while Türkiye has big scores with the PKK and wants to eliminate it.

“Positive consequences” for the conflict in Ukraine

How will the meetings affect the ongoing struggle for peace, stability and territorial integrity in Syria?

All observers of Middle Eastern issues agree that any rapprochement between two countries at the level of Türkiye and Syria is evidence of great positive developments in the region in order to establish peace – a rapprochement that will benefit not only those involved in the agreement, but will also bring peace and calm to many countries and their societies indirectly involved.

Therefore, it is necessary to dismantle all the mines that may be frozen or postponed, God forbid, any meeting, especially before the big meeting between Presidents Recep Tayyip Erdogan and Dr. Bashar Al-Assad.

The West will be one of the main beneficiaries in their societies of any positive meeting that leads to good endings between Türkiye and Syria. We must also not overlook that the success of such a meeting will have positive consequences on the course of events between Russia and Ukraine.

How will the meetings affect the UN work concerning Syria, especially in the context of the UN resolution 2254?

We believe the United Nations cannot object officially to the understanding between Türkiye and Syria, especially given the UN Resolution 2254, which called for an end to the war and a political settlement.

The United Nations must bless the Turkish – Syrian meetings at all levels leading to the great meeting between the two presidents. Even more so, since what we expect from the understandings is a complete end to the security situation for which the Syrian and Turkish people are paying the price together at all levels. These meetings also establish political understandings, as indicated by the resolution 2254. Remember that the resolution does not condition a regime change, but rather political settlements that bring peace to the Syrian and Turkish societies.

What is the atmosphere you observe in the West or Geneva in regards of the Syrian-Turkish-Russian meetings?

No position has yet been taken by those concerned with human rights at the United Nations in Geneva so far. In our opinion, they are waiting for the outcome of the negotiations. And if peace comes between the two countries, this will be a welcome thing, because it will end the human tragedies and violations.

Destructive international actors must recognize that their project has failed

Do you think there are forces that are opposing these steps of rapprochement? If so, which ones and what do you expect them to do?

We must beware of some takfiri groups that started to act negatively towards the meetings that took place. They seek to push some international powers to slow down the meetings, because they found themselves outside their agenda that they were trying to spread over that geographical area.

Accordingly, leaving aside these dark forces will positively help the successes of the initiative, and thus, we will witness breakthroughs. There is no doubt that it will be a victory for humanity.

There are regional and international forces and parties that may play a negative role, especially since they have never wanted peace in the Middle East region.

These countries, which I do not name in order to avoid obstructing interference, need to see that their project has achieved nothing but killing and abusing citizens, weakening the economies of the two countries and draining them into absurd wars. They have to understand that any obstruction or cancellation of the process will have consequences and repercussions on them and their societies. Should these meetings fail due to interference from groups under superpower influence, the entire region will return to square one. We may then face a greater scene than before March 15, 2011, where everyone tested their ability and energy and learned a lot from experiences. We are in front of a more heated scene of abuse, killing and blood.