Germany’s chance was used by Türkiye 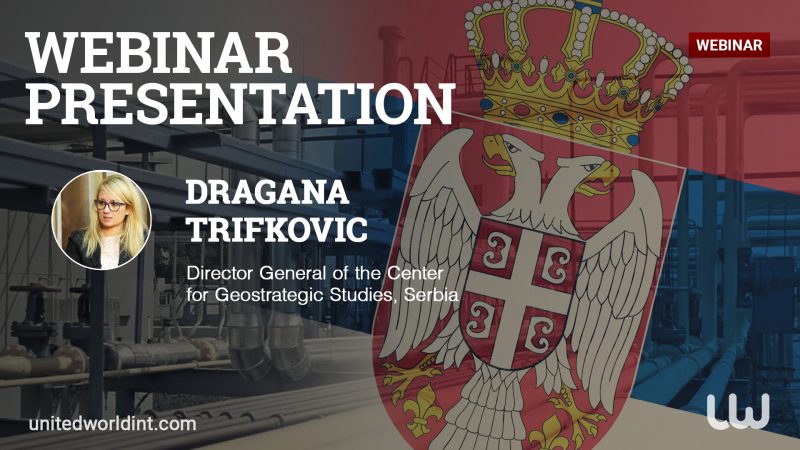 By Dragana Trifkovic, Director and Milos Zdravkovic, expert for energy policy of the Center for Geostrategic Studies, Belgrade, Serbia

United World International continues the publishing of presentations made in the webinar “Europe’s Energy Crisis and the Prospects of Russian-Turkish Cooperation”.

Today we present the text of the Center for Geostrategic Studies in Serbia. Title and subtitles were set by UWI.

On the assigned topic of the energy crisis in Europe, the Center for Geostrategic Studies prepared an analysis, thanks to our expert in this field, Milos Zdravkovic. I will try to present it as clearly as possible.

I would start from the following: There is NO substitute for Russian gas, neither in Serbia nor in Europe. The US administration is using the Ukrainian crisis in an attempt to have its suppliers seize the market of the Old Continent from Russia.

The International Energy Agency, world experts and energy companies warn that there are not enough stocks of blue fuel on the planet that could compensate for any shortage of Russian gas on the European market. Apart from the fact that LNG is available in small quantities and is extremely expensive, when it comes to Southeast Europe, Serbia, there is no infrastructure that could be used to transport it to our country. With the construction of the “Balkan stream”, whose capacity is 15.75 billion cubic meters per year, and the agreement with the Russian president on a more favorable gas price, our country ensured a safe supply of citizens and the economy.

Brussels and Washington are pushing for a Serbia-Bulgaria interconnector

There is no possibility that Serbia receives gas from any other source. Certain circles in our country emphasize the importance of the interconnector between Serbia and Bulgaria, which is being built with the support of the EU and the European Investment Bank. Brussels and Washington are pushing this project because of their geopolitical interests. Apart from the fact that the gas pipeline has a modest capacity of 1.8 billion cubic meters, there is no guaranteed gas that could reach Serbia via that route. According to some sources, possibilities are opening up to supply Serbia with natural gas from Azerbaijan, from the gas pipeline on the Southern Gas Corridor, as well as LNG terminals in Greece, or those that in the future can be a source of gas for our region, such as the Eastern Mediterranean.

There is not enough LNG, and it cannot compete with prices. American companies are limited; they cannot export large quantities. The next option that is mentioned as a possibility in perspective is the blue energy from the Mediterranean gas pipeline “Eastmed”. The agreement on its construction was signed two years ago by Israel, Greece and Cyprus. (The essential question is whether this gas pipeline will be built, because Israel, for its geostrategic as well as economic reasons, has an immediate interest in making a gas connection with Egypt).

On the other hand, Europe embarked on a very accelerated Green Agenda – the transformation of the economy and the way electricity is produced. Germany has rapidly started introducing energy from renewable sources. The consequence of such a policy is that at the end of this year, for the first time since the Second World War, it will be an importer of electricity.

Last year Europe ended by importing 40 percent of gas, 33 percent of oil and 70 percent of coal from Russia. On an annual basis, between 216 and 267 billion cubic meters of gas arrives in the Union from that country. We will summarize the data for this year soon.

The European Union and the USA reached an agreement on the supply of American liquefied natural gas (LNG), which should reduce European dependence on Russian gas.

The Americans acted fairly towards the Europeans in this agreement. People often think that the largest producer of energy in the world is Russia, but it is not – it is America. It is also the biggest consumer. The well being of the American economy is based on cheap energy resources, so the USA cannot currently offer more than those 15 billion cubic meters.

First of all, it is a technological issue, not an economic one, because it cannot produce more.

Qatar, the second largest exporter and fourth largest producer of natural gas, announced that it would not be able to provide Europe with larger quantities because it has long-term contracts with Asian countries.

Netherlands will stop gas production in 2030

It is not normal that 34 percent of the world’s energy is consumed by Europe and the USA, eight percent by Russia, 20 percent by China, and the most populous countries such as India, Bangladesh – Indochina, where 40 percent of the population lives, consume only 12 percent. Prices on other continents are much higher than in Europe. While the Europeans struggled to diversify their supply routes, Russia was quietly building its gas pipelines to China.

However, what is rarely talked about, continental production in Europe, more precisely in the Netherlands, will be stopped in 2030, and gas production in the North Sea drops by 40 billion cubic meters per year. Europe is in a very big energy problem.

France will start building 14 nuclear power plants in the foreseeable future, which can strengthen the French economy compared to any other European one.

Disconnecting Serbia’s energy ties with Russia is a political, not economic issue – and an impossible one

Releasing Serbia from its energy dependence on Russian gas is primarily a political, not an economic issue. All the more so that in the foreseeable future, despite the first steps taken towards diversification of gas supply sources, which should enable competition on the market and energy independence, it cannot be counted on. In addition, Serbia has neither the infrastructure nor the technology for eventual delivery, processing and storage of liquefied gas, and it is estimated that this would cost it slightly less than one billion dollars.

In the next 10 to 15 years, there will be no alternative to Russian gas for Serbia because there is not enough of it from other sources, so it is impossible for our consumers to replace it with something else. The situation is no better regarding American liquid gas either, because in Europe there are only a few terminals for its reception and all of them are quite far from us, except for the one in Alexandropoulos, which is not yet finished, and in Krk, which was opened last year and whose capacities limited. That’s why this story about American liquefied gas is on a long stick, and besides, it would cost us at least 2.7 times more because it is based on fracking technology, which is much more expensive and which affects the price.

Gas, which arrives by tanker from America, Qatar or another seller, is significantly more expensive than gas that arrives via pipelines. It’s simply a more expensive technology. First, the gas has to be transferred to a liquid state, so that it can be transported, the journey takes time, and when it reaches a port in Europe, it has to return to a gas state again. For that, infrastructure is needed, and not even much larger countries in Europe have it, not Serbia.

What alternative for Russian gas does Serbia have in perspective?

The project in Bulgaria has not even started

The project is in the study phase, while construction could begin in a few years.

Alternative sources of gas supply from Norway, the USA, the Netherlands

As for Türkiye, it continues to benefit the most from the conflict in Ukraine. Not only is it achieving the desired status of a “European hub” for Russian gas, but it is also making big money from processing diverted Russian oil. This is in favor of Erdogan, who is preparing for elections at a time when inflation is skyrocketing.

Türkiye managed to become the world’s largest energy hub with the latest agreements with Russia and the European Union. This enables it to lead a multipolar foreign policy. However, this does not automatically mean that Ankara is turning its back on the West, as they are often inclined to interpret in Washington and Brussels.

The geographical location of Turkey could be of strategic and energy importance as a strategic energy hub for Europe for supplying natural gas from the Caspian Basin, Central Asia, the Middle East and the Eastern Mediterranean Basin. Iranian natural gas and oil can also be transported through Türkiye. Of course, provided that the negotiations on the revival of the Iran nuclear deal are successful.

The flow of natural gas from large resource areas in Azerbaijan to European countries could be increased through the Trans-Anatolian Gas Pipeline (TANAP), in order to alleviate energy supply problems across the continent.

The capacity of TANAP, which is currently 16 billion cubic meters per year, will soon increase to 31 billion cubic meters. By the end of the year, Türkiye will complete the road map to realize its long-standing dream of functioning as a gas-trading center.

Putin proposed the creation of the largest gas hub for Europe in Türkiye, and noted that the lost volume could be moved there. He also emphasized that Russia will not supply energy products to countries that set an upper price limit for them.

The resource that is now coming to the European market is being sold at exorbitant prices and fueling inflation. Ordinary Europeans are suffering. In a year, their electricity and gas bills more than tripled. What does Russia have to do with it? They are constantly trying to blame their mistakes on someone, in this case Russia.

Germany’s chance was used by Türkiye.