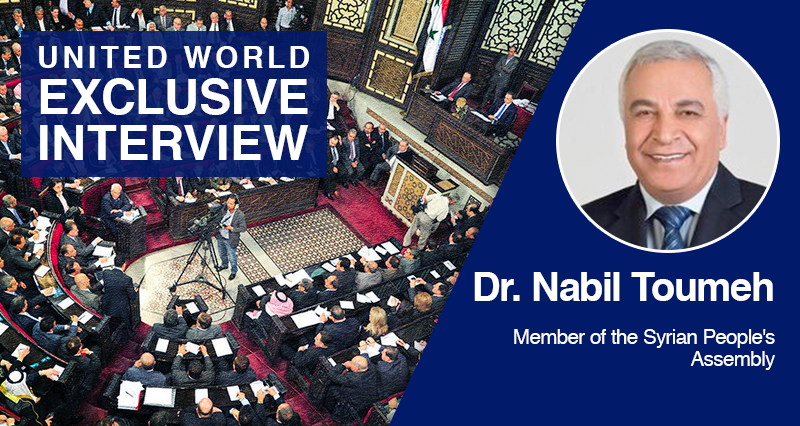 The Turkish government has articulated two policies at once recently: efforts to pursue another ground operation in the north of Syria and the proposal to start a political dialogue with the Syrian government.

Under what conditions can reconciliation between Türkiye and Syria take place? What is the Syrian perspective on the regional autonomous entity in its north and how does Damascus consider the current US policies against it?

We asked these questions Dr. Nabil Toumeh, a Ba’ath party member in the Syrian People’s Assembly. In parliament since 2016, Dr. Toumeh is an influential intellectual in his country, having written various books on literature and philosophy and leading important publishing houses. Besides on publishing, Dr. Toumeh is also an active investor in various fields and has been targeted by U.S. sanctions in 2020.

Western media reports say that President Bashar Al Assad has rejected the tripartite meeting with Putin and Erdogan. Is this true?

The Presidency has not officially announced anything in this regard. So, what surfaced in the media was a sheer speculation. In reality, the concept of national interests carries the logic that this meeting may happen, and in politics there is neither absolute enmity nor permanent friendships. According to the game of interests, if such a meeting was to be held, it should take into account the conditions of national sovereignty that guarantee safety and security for both parties.

If these reports were false, when do you expect this meeting to take place?

Türkiye has complex political circumstances and upcoming presidential elections in 2023. We have to think about whether this meeting will support President Erdogan before the elections. Also, will this meeting lead to an alleviation of unfair sanctions on Syria, and will it contribute to lifting some of the economic, political and social blockade against the country? This is what has to be taken into account. Meeting can happen before or after the elections.

What does Syria expect from Türkiye?

Syria does not expect, but rather believes in the fundamental principles of the neighborly relations that existed before 2011, and returning to this point requires positive attitudes from the Turkish side, in addition to Syria’s belief in the right of security and border security for all neighboring parties.

By “mutual understanding and dialogue”, Turkish-Syrian joint operation against SDF is possible

How does the Syrian government view the PKK / People’s Protection Units / Syrian Democratic Forces and its independent regional entity in the northeast of the country? Türkiye considers them a threat to its national security. Is a joint Turkish-Syrian operation against this entity possible?

The Kurds are predominant in Syria, Türkiye, northern Iraq and northwestern Iran, whilst the largest bulk concentrates in Türkiye. An understanding on this concept, upheld by the US, is very crucial. If the two particular parties reached such an understanding, coupled with the Iraqi and Iranian sides in general, this would lead to ending the hypothetical threat of some Kurdish extremists. Indeed, it is possible, through the vehicle of mutual understanding and dialogue.

Is Turkish-Syrian cooperation possible in consideration of Syrian citizens currently in Türkiye? What are the steps that can be taken?

There must be cooperation, and the lack of this cooperation means keeping the crisis alive. I always stress that understanding on this issue must be within the framework of rational and logical dialogue. This is the most important step that must be taken by both parties, especially by the Turkish side.

Türkiye backs some oppositional groups, the U.S. backs others, and Arab countries support again different ones

The Syrian Constitutional Committee ceased its meetings. What does the Syrian government reject vis-à-vis the work of this committee?

The committee is a social option backed by the state authority. Thus, it can conduct negotiations with the so-called opposition. The Syrian government has not ceased the committee work, nor the UN representative Pedersen, but there is lack of seriousness on the other side to proceed with the dialogue.

For instance, Türkiye backs some of the opposition parties, America backs others, and the Gulf again different ones. If an understanding occurs between Syria and Türkiye, it will solve many dilemmas, and the committee will resume its function.

U.S. may substitute base in Türkiye with new ones in Syria

The United States justifies its activities on Syrian soil by fighting against ISIS. Is this true?

It is certain that this justification is illogical and unrealistic, because the game of ISIS and al-Nusra and those affiliating with them has been revealed. We know who made them and who runs them. This nonsense no longer fools anyone, because the US’ deep policy is to occupy the land of Syria. Had the Americans been sincere in their fight against ISIS, they would have fought with the Syrian government, thus, their victory would have been much powerful.

Here, I would like to express my concern over the Americans seeking to set up new military bases in Syria. This would eventually lead to dispensing of their existing ones in Türkiye, namely Incirlik. Are the Turks aware of the US concealed policy against them?

This is the product of their dealing with Russians and Iranians. I began my notes with the game of interests, and when the US interests conflict, they act destructively, but calmly.

How would you describe Israel’s goals and activities towards Syria?

They are exceptionally hostile, and they have not realized that Syria is not hostile to anyone, but rather believes in the enmity of truth. We in Syria, reserve rights in the Golan occupied by Israel, and support as well the Palestinian right to establish their independent state with Jerusalem as its capital. When rights are restored, enmity disappears, and this applies to everyone. Syria always calls for productive dialogue and refrain from evasive and shallow ones.

I honestly hope that the Turkish role will gain its past momentum by initiating a creative dialogue. Only via dialogue, a real turn towards peace will be possible.

Thank you for this conversation. Wishing you the best in your task.