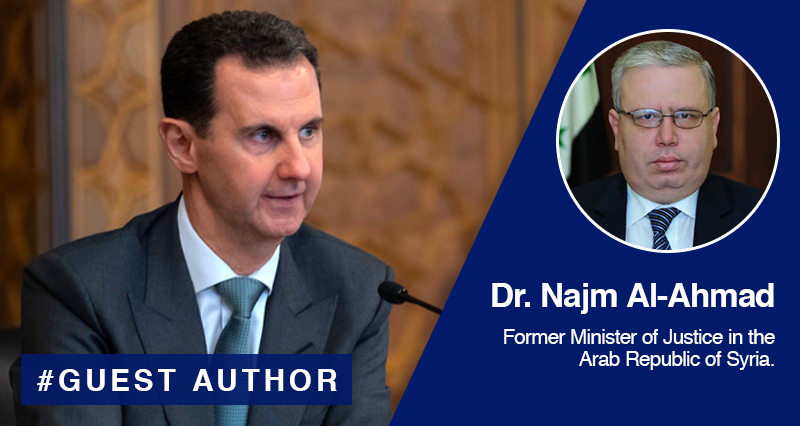 Minister of Justice of the Syrian Arab Republic 2012 – 2017, Professor at the Faculty of Law in Damascus University

The President of the Syrian Arab Republic issued Legislative Decree No. (24) dated 12/21/2022, which includes granting a general amnesty for crimes committed before the date of its issuance, so that the amnesty includes the full penalty for the crimes of internal and external flight stipulated in the Military Penal Code No. (51) of the year 1950, but it does not include those who are in hiding and fugitives from justice unless they surrender themselves within three months for internal flight, and four months for external flight.

It also included the full punishment for all misdemeanors and violations stipulated in the Syrian penal laws in force, and only some infamous misdemeanors that are not accepted by the Syrian society were excluded from its provisions. Fines were also excluded, especially if they bear the nature of civil compensation to the state.

In order to benefit from the amnesty, it is required that there will be no personal allegation, or that this allegation, if any, be dropped. Nor does the pardon have any effect on the personal right lawsuit that can be filed by the aggrieved party within a year from the date of issuance of the decree before the criminal court, and after that date he can file it before the competent civil court.

And before the new amnesty decree was issued, the President of the Republic issued Legislative Decree No. (7) on 4/30/2022, including a general amnesty for terrorist crimes, with the exception of those that led to the death of a person.

The new amnesty is a continuation of a series of amnesty decrees that have been issued repeatedly since the beginning of the crisis in Syria in 2011, with the aim of strengthening the requirements of national reconciliation, and enabling those who made mistakes to repent and purge themselves, so that they can reintegrate in the social system, and then, harmony and peace will prevail in the country.

There is no doubt that the amnesty decrees that were issued constitute an opportunity for every person covered by its provisions to benefit from them, whether inside or outside the country, despite the difficult conditions that the Syrian Arab Republic is going through due to the terrorist acts it has been subjected to since 2011, and the foreign interventions in its internal affairs.

US occupies part of Syrian territory, supports separatist and terrorist forces, seizes oil and agricultural riches, not to mention the unfair economic blockade imposed by the US and some other countries in contravention of the provisions of international law, and the obstruction of the delivery of humanitarian aid, which contributed to the suffering of the people, especially children, women and the elderly, due to the scarcity of medical and food supplies, and the disruption of public facilities, including hospitals and medical centers.