Two sides of the East unite 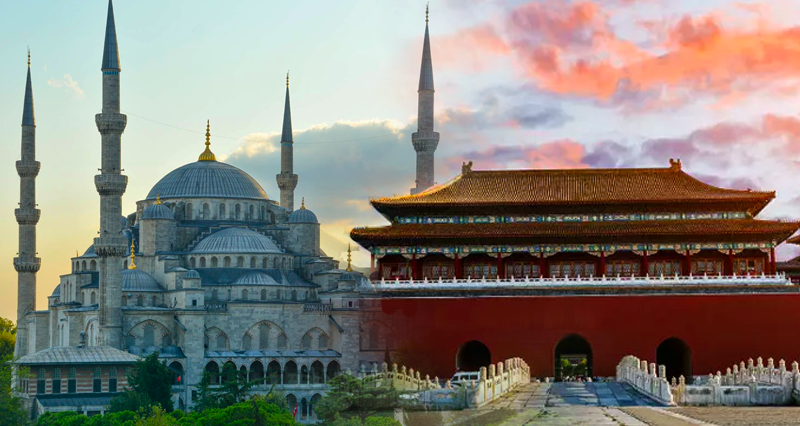 The political axes of the world are changing as a result of the economic rise of the Eastern nations.

The world is Easternizing.

The western-centered order is declining.

And while the shifts in axes are causing new controversies in the global sense, they also result in tectonic bursts.

The fault lines are now active…

Türkiye resembles the mighty dome of Hagia Sophia, where voices from all around the world are resonating.

At this point, where the East meets the West, or diverges from the West depending on the perspective, new controversies, bursts or the sound of a new birth are heard and felt loud and clear.

Paying attention to voices of Türkiye makes the world much easier to understand.

The Turks, who have been continuously moving towards the West in their history that began 3000 years ago in Asia, have recently been turning towards the East.

When considering the landmass of Türkiye being to 93% in Asia, it would be much more right to say Türkiye is finding its place back in the East, instead of saying that the country is turning towards the East.

This new situation has already been noticeable in economy since the early 2000s. Being tired of waiting at the doorstep of Europe, which entered an economic stagnation, Turkish companies have instead focused on Asia, the Arab World and Africa, which all promised a bright future.

The new trend in the Turkish economy has stretched all the way across Asia, to China, in light of the Prophet Muhammed’s words: “Seek knowledge even if you have to go as far as China”.

The economic ties have triggered political dynamics not much later, and Türkiye has finally taken steps to participate in the Belt And Road Initiative, which China has offered to the world.

China did not leave this step go unanswered: The Chinese, who have built the Great Wall Of China in I. century BC against Turkic raiders, now have opened their gates all the way for Türkiye after 2000 years.

Today the relations between these two countries are developing mainly in economic field, and also in political, cultural and military fields, with cautious albeit safe steps.

Belt And Road Initiative is a historical initiative whose goal is to bring 4 billion people across Asia, Europe and Africa, via international trade…

One of the most important factors for the process of national awareness of Europe, which has carved the path to the Enlightenment, was the centralization caused by the connection of transportation and logistics networks.

Belt And Road can carve the path for a new Enlightenment by creating an intercontinental centralization.

No matter how much the Chinese Foreign Minister Wang Yi decides to define the Belt And Road Initiative not as a “geopolitical tool” but as an “opportunity for a joint development” – it can be seen that China has created with that initiative a new geopolitical approach that is a mix of the current ones.

The idea of the British geographer Halford Mackinder that defines the combined continents of Asia, Africa and Europe as the “World Island” and that, controlling the crossing point of these continents, which would be Eurasia, means the domination of the world, only makes one part of the Belt and Road Initiative.

The other part of the initiative stands on the strategy of sovereignty over the sea routes, developed by Alfred Mahan who is one of the most important American strategists in 19. Century. This approach defines the international influence of a nation by the nation’s power at the seas.

Belt and Road basically tries to bring Mackinder’s theory on continents and Mahan’s theory on oceans together, on grounds of mutual cooperation.

While Türkiye, which is important for both continental and nautical parts of the Belt and Road, keeps building new airports, bridges and seaports that will connect East to the West much easier, it is also taking actions to diverge away from the Atlantic influence.

However the Atlantic does not wish to lose Eurasia that is defined as the heartland of the world, and therefore Türkiye. Thus, its pressures are increasing more than ever.

Türkiye and the Atlantic’s strategy towards Eurasia

There two main goals behind the Anglo-Saxon imperialism’s provocation of the war at the heart of Eurasia in Ukraine;

1.The short and middle term goals are to hinder the Russian-European relations, therefore maintain Europe’s dependency on the Atlantic.

2. And the long-term goal is to hinder the connection of Europe to Asia and to block the Belt and Road Initiative to reach Europe by destabilizing Eurasia.

The Atlantic implements a similar strategy at the other side of the Eurasia, in Türkiye.

And in parallel with the developments around the world, Türkiye is now in an effort to break down the chains of NATO, that were put over it back in 1952.

The suppression of the coup attempt with the national elements of the Turkish Army together with the willpower of the people back in 2016, plotted by the US/NATO backed FETO terrorist organization, has triggered a process that accelerated the break off of Türkiye from the Atlantic.

And the Atlantic response to this trend from Türkiye was as follows;

1.The support given to terrorist organizations, aiming to create a second Israel named “Kurdistan” in the middle of Mesopotamia, by demanding lands from Türkiye, Iran, Iraq and Syria that are all in the pathways of the Belt and Road Initiative.

The United States has leveled up its “implicit” support for the PKK over the last 40 years, to an open and official level to the Syrian branch of the organization YPG/PYD/SDF, giving the “fight against ISIS” as the reason.

It came to such a point where American generals have been awarding the representatives of this organization in open press conferences, while the US Army can send condolences for the terrorists that were killed.

And the Turkish Armed Forces’ response to this US project was to target the organization’s hideouts in northern Syria and Iraq, including US-PKK joint camps. The actual reason for the rising calls for “human rights” by the US against the Turkish Armed Forces’ operations, are actually the hits delivered to the US plans to create a second Israel by constantly destabilizing the region.

2. Another branch of the US plans to destabilize the Eurasia is to provoke a Greco-Turkish war at the crossroads of the East and the West the Aegean Sea, by militarizing the pro-US government in Athens.

A similar plan was implemented by the British imperialism in 1920s, and the Greek Army had landed on Anatolia to suppress the Turkish struggle for independence and to invade Turkish lands. However the result was the imperialists and their puppets being driven out into the sea by the Turkish Army under the command of Mustafa Kemal Ataturk.

Unfortunately, the Greek government is being a part of a similar plan today. The target here is not only Türkiye, but entire Asia and the Belt and Road through Türkiye.

Let us hope that the Greek nation, a nation with a long history and anti-imperialist awareness, can kick out this US puppet government before the Aegean Sea is drenched in blood by the Atlantic plans.

In this context, the normalization processes in Türkiye-Syria and Türkiye-Egypt relations seem to stand out as the best response to the Atlantic.

“Look towards the sun that will now rise in the East”

The founding leader of the Turkish Republic Mustafa Kemal Ataturk, has made these important and historical analyses in its meeting in the Egyptian Embassy in 1933;

“Look towards the sun that will now rise in the East (…) I can see the Eastern peoples awakening from all the way here, just as I am seeing the sun rising in the East (…) There are many more kin peoples that are to be gaining their independences and freedoms. These peoples are going to get over all the troubles despite all obstacles and hardships, and will reach the future that is awaiting for them. All colonialism and imperialism will perish from the face of the earth and there will be a new era of international harmony and cooperation, with no differences in color, religion or race.”

As the great leader foresaw, the Eastern peoples have awakened and now giving a hand for their Western brothers and sisters who have the heritage of the Enlightenment, for a common future.

In this context, it is in favor of the West and the all humanity, for Türkiye, which is the gateway of Asia to the West, to strengthen its relations with China, which is the easternmost country in Asia.

The stability in the heartland of the world Eurasia, and therefore in Türkiye, will take out both East and the West from the balances of war and rivalry, that is imposed by Atlantic.

The unification of East and West will be an important step in this long march of humanity.