Atatürk’s plan for a regional confederation 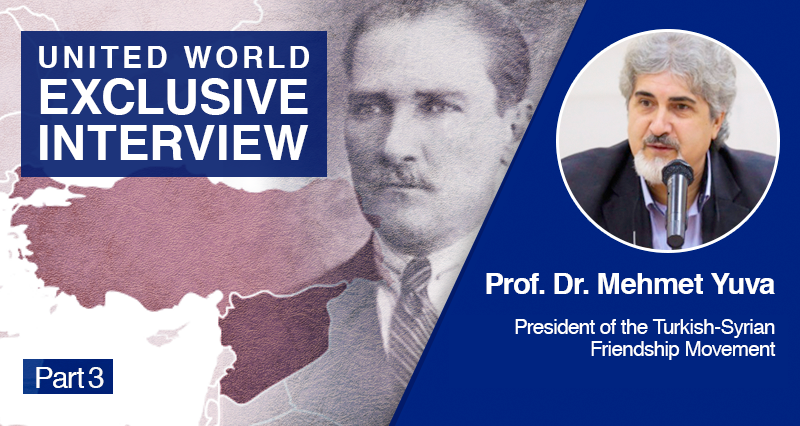 Today we present the third and last part of our interview with Prof. Dr. Mehmet Yuva. In this part, Yuva speaks about the vision of Mustafa Kemal Atatürk, the founder of the Turkish Republic, for Türkiye and Syria.

Especially in your recent writings and speeches, you refer to Mustafa Kemal Ataturk’s plan for a regional confederation including Türkiye and Syria. Can you elaborate on this?

Ataturk was a soldier, historian and geographer who knew this region very well. As an alternative to the approaches imposed on us by the West; since he knew that the peoples, ethnic and sectarian groups have lived side by side, he understood that the borders drawn artificially would create huge problems even if the national liberation struggle was successful.

The first secret organization of the liberation struggle in which Ataturk was involved was established in Damascus. In organizations led by Ataturk, for example in the sections in Aleppo, Turkish and Syrian revolutionaries discussed and implemented a program to fight against imperialism together. Syrian and Turkish revolutionaries supplied each other with soldiers and arms. Unfortunately, this history is little known in Türkiye.

What did Ataturk say to the Syrian Prime Minister?

When Ataturk hosted the Syrian Prime Minister Jamil Mardam in Türkiye in 1937, he stated the following: “While I spent a large part of my labor for the establishment of the independent and sovereign national state for Turkish nation, I also fought for the independence and sovereignty of the Syrian nation.” In this context, Ataturk gave the following lesson to the French: “The French claim that they came to Syria to make it better. The French, since the Syrians cannot govern themselves they should be granted mandate. The French should learn what civilization means from the Syrians. They should first learn what the situation of the French was when the Syrians were already a civilized people.”

Ataturk had a two-step plan. In the first step, he proposed that nations beat back the occupation and establish their own nation-states. But being aware that the West had exploited all the resources and wealth of the world throughout history, Ataturk argued for both a federal and a con-federal unity of national states since imperialism would not cease its aggression. So what does this mean? Federal central states plus independent sub-states of different religious, sectarian, linguistic and ethnic communities, or in other terms self-governing local administrations alongside strong central federal states in Iraq, Syria and Türkiye.

Ataturk saw that Arabs, Turks, Kurds, Armenians, Assyrians and the others had much in common, that they had lived together for hundreds of years and this could lead to a common will. For this reason, he had always emphasized the ideas mentioned above to his guests and friends from Iraq and Syria.

But unfortunately Ataturk did not live long enough. He passed away in 1938. Also, Syria did not gain its independence before April 1946, and even when it did, it was an incomplete one, because imperialists took away big chunks from Damascus. There was no country called Jordan, they created it. Palestine was a province of Damascus, they created a Jewish state there. Lebanon was also a province belonging to Damascus, and they created a Maronite Catholic state there. In short, they tore Syria apart.

The imperialists then decided that Syria was “not torn apart enough” because was still strong in Lebanon, Yemen, Iraq and Palestine, supporting the independence struggles there and standing against Israel. From 2011 onwards, they wanted to deal the final blow to Syria and divide it into Alawite, Sunni, Druze, Kurdish, Turkish, Christian parts. They hoped that by destroying Syria after Libya, like Iraq, they could easily achieve their goals in the region.

But they cannot succeed. Ataturk had said to the Syrian Prime Minister Jamil Mardam: “They have bound Syria’s hands. Loosen those hands and contribute to the independence and sovereignty of the Syrian nation.” Ataturk had also expressed his belief that “Those days will come”. Today is the time to break the shackles on Syria.