The last country in Africa waiting to be saved from colonialism: the Sahrawi Arab Democratic Republic 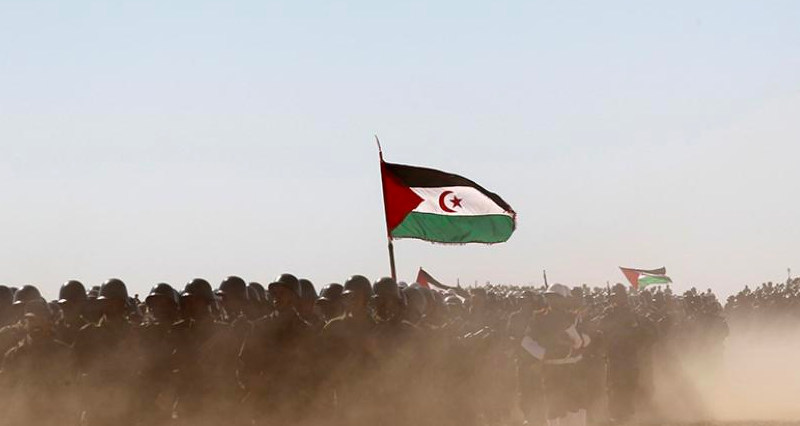 One of the most prominent international guests of the Vatan Party 11th National Congress dedicated to Admiral Soner Polat was from the Sahrawi Arab Democratic Republic, commonly referred as Western Sahara. The Sahrawi President Brahim Ghali has sent a greeting message to the Congress. So, what is Western Sahara and why would their struggle for independence be important?

Western Sahara is located in northwest Africa between the Atlantic Ocean in the west and the Sahara Desert and Algeria in the east, and Morocco in the north with Mauritania in the south. With an area of around 266 thousand square kilometers and a population of 603 thousand, Western Sahara’s 2049-kilometer-long borders are shared with Algeria by 41 kilometers, 1564 kilometers by Mauritania and 444 kilometers with Morocco. The country has a coastline of 1110 kilometers to the Atlantic Ocean, which makes this country even more important from a geopolitical point of view.

The people of Western Sahara are called Sahrawi. And the Sahrawi society defines itself mostly with their Muslim and Arab identities.

Being a colony under the Portuguese rule for two centuries, Western Sahara became one of the first areas of conflict between the British, French and Spanish colonists in the history of European colonialism. After the rivalry between the Western powers, Spanish came triumphant. Thus, Spain got its colonial possession into a legal basis, after the 1884 Berlin Conference. Morocco on the other hand, came under the French rule.

The struggle against Spanish colonialism

Just as in the rest of Africa, the struggle for independence have begun in Western Sahara and Morocco after the Second World War. However, Spanish and French colonialists have suppressed these struggles by use of force. This oppression has united the Moroccan and Sahrawi independence movements. On November 16th 1965, the UN Declaration 2072 called on the Spanish government to comply with the Resolution 1514 “The Declaration on the Granting of Independence to Colonial Countries and Peoples”, adopted on November 14th 1960, for the Spanish Sahara. The resolution called on the Spanish government to urgently implement the right to self-determination in the region, to be organized by the UN itself. These calls from the UN have further motivated the nationalist movements in Western Sahara, which gave birth to the Harakat Tahrir (the Liberation Movement) in 1967 under the leadership of Muhammad Bassiri that demanded the independence of this region. The leader of the Harakat Tahrir Movement, Muhammad Sidi Brahim Bassiri was executed by the Spanish three years later in 1970.

The Polisario Front and the Sahrawi Arab Democratic Republic

The rich phosphate deposits in the eastern city of Bou Craa have whetted the appetites of Morocco, Mauritania and Spain all of which have already claimed the region in 1972, and now and Algeria and Libya were also involved in this process. Meanwhile the Polisario Front or the Popular Front for the Liberation of Saguia el-Hamra (The Red Canal) and Rio de Oro (The Gold River) founded in 1973, had also launched a campaign for independence against Spain.

Spain handed over the control of Western Sahara to Morocco and Mauritania with the 1975 Madrid Accords. The Western Sahrawi territories were split between Morocco and Mauritania. And after Spain withdrew, the US supported the Moroccan invasion of Western Sahara, providing intelligence and arms. The first international reaction to that came from Algeria. Algeria supported the idea that the Accords would destabilize the region, while declaring that it would increase its support for Polisario Front.

In 1976 Spain entered a new era after Franco’s death. Madrid announced to the UN that it had fully withdrawn from Western Sahara and that the matter was completely over for their accord. And following the Spanish withdrawal from Western Sahara, the Polisario Front proclaimed the Sahrawi Arab Democratic Republic (SADR) on February 27th 1976. Meanwhile, Mauritania has withdrawn from the region in 1979 after reaching an agreement with SADR. After the withdrawal, Morocco occupied the southern region that was previously controlled by Mauritania.

While the conflicts with Morocco intensified, the SADR Government made an exclusive political move and applied for a full membership to the Organization of African Unity (OAU). Despite Morocco’s heavy opposition, the SADR Government was recognized and its full accession to the OAU as a sovereign state was approved. Two years later in 1984, Morocco has announced that it suspended its own OAU membership.

Hypocrisy of the UN

Western Sahara has been recognized as a “non-self governing territory” by the UN since 1963, being the only colonial nation on the African continent. The UN has contributed basically nothing to the resolution process, because of its hypocritical policies. United Nation’s Mission for the Referendum in Western Sahara (MINURSO), which was created after a ceasefire in 1991, had also failed to produce any results, and finally the talks between Morocco and the Polisario Front, which took place under UN mediation, were suspended since 2019 and the ceasefire has ended in November 2020. The Secretary General of the Polisario Front Brahim Ghali, said: “The ceasefire agreement with Morocco has been officially cancelled. Therefore the acts of war are back in force in reaction to defend the legitimate rights of our people”.

The US support for Morocco

Morocco’s strategic ally in the region the United States, have supported the Madrid Accords and been in favor of a resolution in the Western Sahara favoring Morocco. US Secretary of State Henry Kissinger has previously said about an independent Sahrawi state: “The United States will not allow another Angola on the east flank of the Atlantic Ocean”. According to the website Saharawi.net, the CIA has revealed that the Royal Moroccan Army was on the verge of a serious defeat at the hands of the Sahrawi People’s Liberation Army (SPLA) in the late 1970s and early 1980s. In hundreds and thousands of recently declassified documents show that the CIA had warned Western and Arab governments that they needed to pursue urgently intervention to save the monarchy regime in Morocco. Many other declassified documents revealed that France, Spain and Saudi Arabia have played an influential role in supporting the Moroccan occupation in Western Sahara, so that the Royal Moroccan Army would not be defeated and humiliated back in 1980s.

Until today, the US government supports Morocco’s plan for autonomy under Moroccan sovereignty for Western Sahara. In 2020 the US President Donald Trump has announced the normalization of relations between Morocco and Israel, stating that Israel also officially recognized Morocco’s sovereignty over Western Sahara. France is also known to support Morocco’s suggestion of autonomy. The Polisario Front on the other hand, rejects the autonomy under Morocco and supports full independence.

The Algerian support for Polisario Front

The most active supporters of the SADR on the other hand, are Algeria and South Africa. Algeria, which considers Moroccan annexation of Western Sahara in 1975 as a threat, has begun supporting the Polisario Front. Thus, in an effort to balance the Moroccan dominance, Algeria has accepted the refugees from Western Sahara right away and enabled the Polisario Front to organize on Algerian territories and act against Morocco. Brahim Ghali, who was elected as the President of SADR in 2016, has made his first official visit to Algeria. The countries that officially recognize the SADR in the West Asia are the People’s Democratic Republic of Yemen, the Syrian Arab Republic and the Islamic Republic of Iran.

Türkiye does not recognize the Sahrawi Arab Democratic Republic as a sovereign state. At the same time, Ankara also refrains to take a stance in favor of Morocco either. Türkiye is basically in an absent position, expressing that the problem should be resolved in the international arena. In April 2022, Ambassador of Türkiye in Morocco, Omer Faruk Dogan has told the website Marochebdo.press that Türkiye could play a mediating role between Algeria and Morocco on the issue of Western Sahara, which was met with a harsh reaction in Algeria. The website Le Courrier d’Algérie news stressed that the ambassador’s claimed “the conflict in Western Sahara was artificially created to take advantage of the fight between Morocco and Algeria”, and said that Algeria has never been a part of this crisis, and it was only between Morocco and the Polisario Front themselves. It was stated that the Ambassador’s statements were contrary to Türkiye’s position, in Slimane B.’s article. It is recalled in the article that the Foreign Ministry Spokesman Hami Aksoy had previously in November 2020 stated that “Türkiye supports the efforts to find a just and a long-lasting political solution to the Western Sahara crisis under the framework of United Nations Security Council Resolutions”.

The Western Sahara is an issue of national sovereignty

The struggle of the Polisario Front against the Western imperialism, mainly the United States, Israel and France, all of which support Morocco, is still ongoing with a strong determination. The President of the Sahrawi Republic and the Secretary General of the Polisario Front Brahim Ghali said in his statement: “The only wish of the Polisario Front is the implementation of international legitimacy on clear and solid foundations, away from the any hegemony or impositions by the imperialist powers”. The Sahrawi President said “The question of Sahara is a problem of decolonization, the solution of which necessarily involves holding of a referendum to allow the free will of the people of the Sahara, like all previously colonized people, to exercise their nonnegotiable right to self-determination and independence, as is evident in the United Nations Resolutions on the issue”.