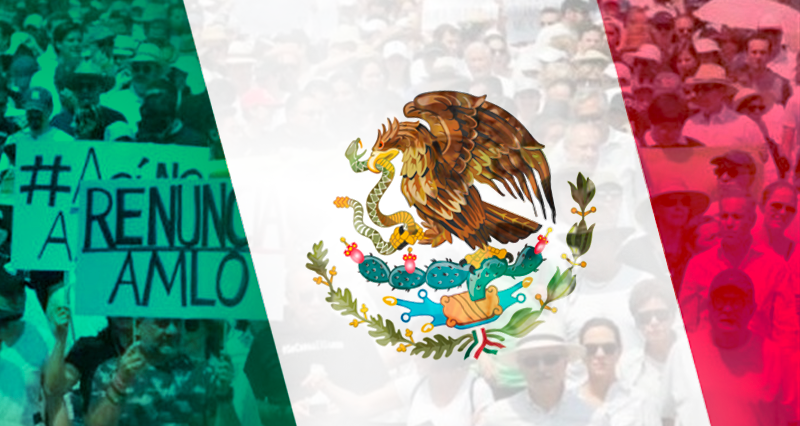 Four years into López Obrador’s presidency in Mexico, popular support for him and the project he heads is unprecedented. As the first leftist ruler in the country’s contemporary history, AMLO – as he is known in Mexico – has been able to keep the right wing on the sidelines. The president maintains a 67% approval rating, according to the latest polls. His numbers are better than any of the last five former presidents.

With this political capital, President AMLO is seeking to make changes to the Constitution to improve Mexico’s political and electoral system. The challenge is great, because despite his enormous popularity, López Obrador does not have the necessary majorities (two thirds of deputies, two thirds of senators) to approve constitutional reforms.

In summary, Lopez Obrador’s proposal consists of ten points: reduce the number of local legislators, reduce the number of seats in the two Chambers of the Federal Congress, facilitate the vote of the Mexican population residing abroad, acquire technology to implement electronic voting, reduce the budget for party bureaucracies, eliminate ordinary expenses to political parties, regulate private financing to parties and electoral campaigns, elect by popular vote the members of the Electoral Institute and the Electoral Tribunal, eliminate the duplication of functions in the Electoral Institute and modify the method of election of congressmen, in order to make representation more effective.

At other junctures, Morena, the President’s party, has managed to build agreements with other parliamentary fractions (especially the Institutional Revolution Party, former hegemon of the Mexican system). The most obvious case was the approval of the president’s security plan. However, today it seems impossible to build a similar legislative alliance to reform the political-electoral system. And the political confrontation has been reflected in street mobilizations.

Last November 19, under the slogan of defending the National Electoral Institute (INE) from the presidential proposal to reform it, the opposition called for a march which turned out to be the first successful march ever organized by the right wing. During this street demonstration, it is necessary to point out two elements of analysis. On the one hand, the discursive construction of the Mexican right wing is radicalizing its positions towards hate and misinformation: the subtextual reading of the right wing demonstration is not the defense of an institute, but the declaration of hate, racism and classism of the most privileged sectors against the project of Morena and López Obrador.

This becomes evident when listening to the racist insults of the demonstrators, but it is also interesting to note that, when questioned about AMLO’s electoral reform, the majority of those demonstrating were not able to describe which points seemed dangerous, incorrect or represented a threat against democracy. Some interviewees even agreed with the measures proposed by the president, without knowing that they were part of the leftist reform initiative.

The second point to note is that, after four years of opposition, the right wing decided to bet on the streets, with a relative success that should not be underestimated. It was clear to Morena and the president that the right wing is finding in a segment of the middle and upper middle classes subjects who buy and reproduce reactionary and hateful speeches. That is why, faced with the fact of the mobilization of the right wing, Lopez Obrador also decided to call for a march, headed by himself.

With this diagnosis, last November 29, all the supporters of López Obrador took to the streets. The presidential call was overwhelming in numerical terms; it is estimated that 1.2 million people marched. But the symbolic battle was also won by the left. AMLO walked for about 4 hours and at all times was surrounded by a sea of people who supported him. The day closed with a public report on the achievements of the Government in these four years of his presidency.

Electoral Reform will not happen, because, as we have already mentioned, the positions of the opposition parties have been clear in rejecting it, despite the fact that the majority of the Mexican population considers that its measures are necessary and correct. The President has celebrated that his adversaries “take off their masks” and are clear in defending anti-popular and conservative positions. AMLO has a plan B ready, a package of reforms to the secondary laws to modify important aspects of the regulation of the political-electoral system, without the need to win two thirds of the vote.

Approval of this package will require a simple majority (half plus one vote) of the deputies, a simple arithmetic for Morena and its allies in Congress. Although this package is not yet known, both the President and the Morena deputies have affirmed that it will make some of the proposals of the Constitutional Reform a reality. The process, in any case, is helping to decant the positions of the government and opposition blocks, and to expose to the public the true interests of each one.

As his government comes to a close, López Obrador is as strong as ever. With his widespread popularity, the constant politicization he promotes daily in his press conference, and the talent for political operation demonstrated by him and his allies in the presidential cabinet, there is no doubt that AMLO will be one of the most beloved and politically effective presidents in Mexico’s history.

Nevertheless, the presidential succession is already a latent problem in the political mood of the population. This fact reveals two tensions that manifest themselves in the structure of the political dispute. On the one hand, López Obrador’s movement shows tendencies to split around the presidential aspirations of specific political cadres, threatening unity and fraternity within. On the other hand, as we saw in the streets, both blocs are already strengthening their discursive, operative and organizational strategies.

The political confrontation is clear and solid. The street mobilization of the right should warn the government bloc that the electoral process in 2024 will not be easy. There will even be political actors who will want to push the country into a dynamic of physical violence. In order to preserve power and stability, it is essential for Morena to build unity and permanent mobilization.