Towards the normalization of Syria-Türkiye relations – 1: The crisis of 2011 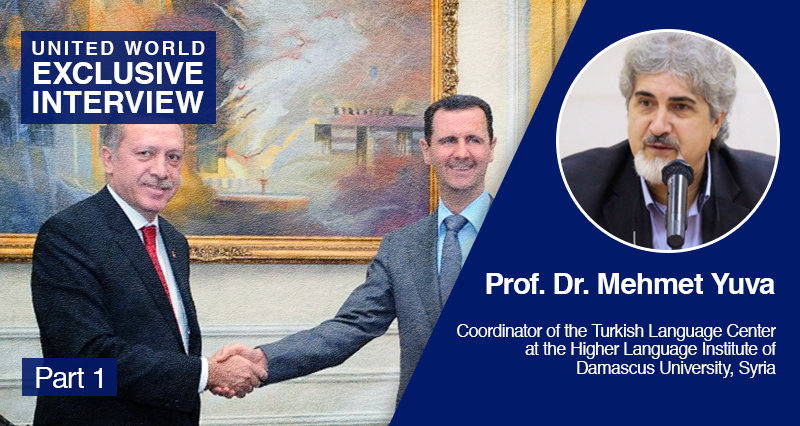 After having been hostile since 2011, Syria-Türkiye relations seem to be back on the path to recovery. For some time, there have been signs from Turkish government officials that relations with Syria could be restored. Erdoğan himself had acknowledged the dialogue between Turkish and Syrian intelligence organizations during a visit to Sochi on August 5.

And most recently, Erdoğan made the clearest statement about the normalization of relations. “A meeting with Assad is possible”, he said on November 24. “There is no resentment or bitterness in politics.” “Sooner or later, we will take steps”, added the Turkish President.

We made an extensive interview with Mehmet Yuva about the past, present and future of Syria-Türkiye relations.

Mehmet Yuva studied international relations and political science at Johann Wolfgang Goethe University in Frankfurt. He received his master’s and doctorate degrees from New Hampshire University in the US.

He lectured in the US, Cyprus and Japan.

He then worked for a long time in the department of history at Damascus University, where he lectured on the history of the US and modern history. He also taught modern history of Cyprus, Türkiye and Syria in the graduate program of the same university.

He took an effective role in the establishment of the Turkish Language Teaching Center at Damascus University.

Mr. Mehmet Yuva, you have been striving for the restoration of Türkiye-Syria relations for many years. Now the statements made by the officials of both countries indicate that they are back on restoration path. In the first part of our interview, we would like to address how the relationship between Türkiye and Syria deteriorated. What were the major drivers and events in the process?

The relation between the Syrian war and gas and oil

Firstly we need to explain why the war in Syria is directly related to gas and oil, so that it can be understood how good relations between Türkiye and Syria will also contribute to both countries in the economic dimension.

In 2010, a huge ocean of gas was discovered stretching from the Iraqi-Syria border (from the Homs basin) to the Latakia-Mediterranean Sea. I say “ocean”, that is, that is a gas source of enormous potential.

In the same year, the project to transfer Egypt’s gas to Türkiye via Jordan and Syria started off. In this regard an agreement between Egypt-Jordan-Türkiye-Syria-Lebanon was signed in 2010. Gas stations were to be built in Aleppo to collect and distribute the gas. On the Turkish side, the same stations were to be built in the city of Gaziantep. Thus, Egyptian natural gas was to be transported to Jordan and Syria, to Lebanon through Syria and to Türkiye through Aleppo. Of course, it was also to be shipped to the world markets across the Mediterranean, especially from the gas storage depots of Ceyhan Yumurtalık in Türkiye. All this took place in 2010.

At that time, Qatar-Syria-Türkiye had very good relations. There were even special relations between family members. The Emir of Qatar and Mr. Erdogan were attending all the important events and religious festivals in Syria with their wives. A huge palace was built for the Emir of Qatar on a hill right next to the Syrian presidential palace, and this served as a holiday residence for him and his family when they came to Damascus. It was at this time that Qatar made a proposal to Türkiye and Syria: Transporting Qatari gas to European markets through Saudi Arabia-Syria-Türkiye route instead of the Iran-Arabian Gulf-Yemen Sea-Red Sea-Mediterranean Sea route (which is logistically expensive).

With this route, Syria, Lebanon and Türkiye were to benefit from Qatari gas. The Syrian side’s response was as follows: Let’s involve friendly countries like Russia and Iran, which are the owners of natural gas and oil, in such studies and activities. So we can transport Russia’s gas through Türkiye and Iran’s gas with Syria-Türkiye-Lebanon route.

While these efforts were underway, Syrian President Bashar al-Assad visited Türkiye with the “5 Countries 5 Seas” project. Syria wanted to weave this project with a gas and oil network. With this project, Syria proposed to connect Egypt, Jordan, Lebanon, Syria, Iraq, Qatar, Iran, Azerbaijan, Russia and Türkiye, first through a gas and oil network and develop economic and commercial relations, and then to establish political and military ones. Unfortunately, although the “5 countries 5 seas” project was presented to Türkiye urgently and as a confidential file, the contents of the file were handed over to unfriendly countries. And from that date onwards, intense attacks an campaigns on Syria were launched.

See what happened then. Unrest started in Tunisia in 2010 and peaked in 2011. After Egypt and Libya, the imperialists turned to Syria. While Syria, Lebanon, Egypt, Libya, Tunisia, Iran and Iraq was occupied with their own civil wars or conflicts or fights, what was Israel doing in the meantime? Israel has started to extract the gas reserves it discovered in the Eastern Mediterranean. Israel’s biggest gas station is the Tamara station. Israel easily transported the gas to European markets as an alternative to Egyptian and Syrian gas. Israel even exported these reserves to Egypt, because Egypt’s production had decreased due to the civil war and had to import from Israel.

The problems caused by Türkiye acting together with the US and interfering in the internal affairs of Egypt and Syria have only served the interests of Israel and the West.

Today, we should be conscious of all this. If the pre-2011 situation is restored and good relations are rebuilt, all these opportunities and natural resources will undoubtedly contribute enormously to production capacity and human welfare of all countries in the region.