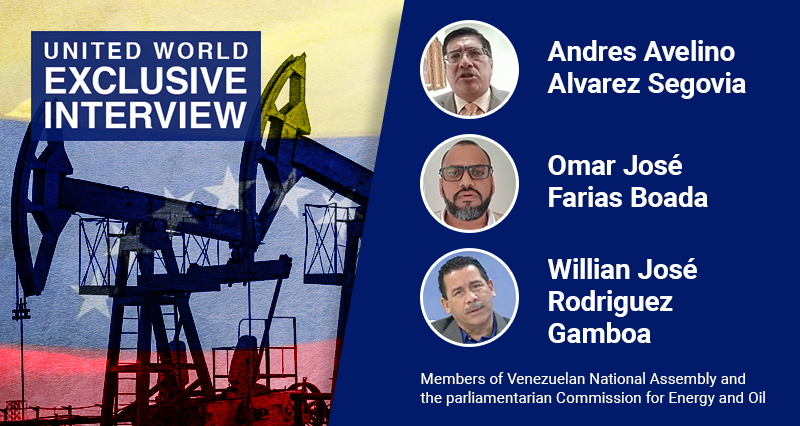 The US administration has loosened its sanctions targeting the Bolivarian Republic of Venezuela on November 26. The Office of Foreign Asset Control (OFAC) within the Treasury Department and responsible for applying sanctions, has granted the US oil company Chevron a license limited authorization to resume pumping oil from Venezuela for the duration of 6 months.

Members of the Venezuelan National Assembly, all of them additionally members of the parliamentary commission on energy and oil, have commented to United World International on the news.

Andres Avelino from the Alliance for Change says that the US decision is “a great victory for Venezuela” and expects it will fuel the return of more international capital to the country.

Avelino told us the following:

“First of all, we do acknowledge the policies of President Maduro to attract foreign investment into our country. With the Biden Administration’s decision, President Maduro has achieved a great victory for the fatherland. Have in mind that Chevron’s activities were interrupted not by the Venezuelan government but by the sanctions regime.

These sanctions have doubtlessly caused great harm to the Venezuelan society. But they also caused great damage to the North American society as well.

The return of Chevron now eliminates the spook of Venezuela becoming a risk-country, a spook that had been created by an international campaign against our country.

Chevron’s return to Venezuela will incentivize other companies from Germany, France, Italy, Great Britain or Canada to also pick up activities in Venezuela and pursue investments in the hydrocarbons sector. Chevron’s return has also confirmed the judicial and economic security that Venezuela provides.

Now, Venezuela is one of the most promising economies worldwide in terms of investment and return.

Is this the beginning of the end for the economic blockade?

Of course. It was inevitable that the sanctions regime as going to crush. We already observe the return of capital thanks to this energy-diplomacy.

After Chevron’s return, how long do you think will it take till Venezuela’s economy fully recovers?

This is difficult to say. But only the news of Chevron’s return have set other owners of international capital in motion.

As Commission for Energy and Oil, we are responsible to present a report on the exploitation of natural gas. This includes all the effects of the sanctions, which the U.S. and the EU have applied against us especially in the sector of supply parts.

We have led an intensive communication with experts, workers and retired employees in our sector in order to present to the president alternative measures for oil and gas production. The latter has today reached 4 billion m3.

The goal here is to advance the existing projects of gas production despite the sanctions measures that are still in force, that are anti-democratic and that violate international law.

Willian Rodriguez: Not the best terms, but an opportunity for more to come

Also member of the PSUV in the parliament is Willian José Rodriguez Gamboa, with great experience in the oil industry. He concedes a “great victory for the government of comrade President Maduro”, but also expresses some caution regarding Chevron’s return. He stated to United World International the following:

First of all, we have to be optimistic about the agreement concerning Chevron. It shows that the war in Ukraine is reshaping the international oil and energy regime: The United States was forced to loosen its sanctions in order to get Venezuelan crude oil to its refineries.

This is a new victory for the government of comrade President Nicolas Maduro: Not the opposition or the dialogue mechanism, but the Biden Administration itself had to swallow its words and permit the license to get the oil.

Furthermore, the dialogue process held in Mexico (between the government and parts of the opposition) seems promising to help liberate our funds blocked by the United States. And we also expect that the sanctions against our main entity in the oil sector, the Petroleos de Venezuela (PdVSA) will also be lifted.

Obviously, there are lots of rumors around the agreement and its terms and conditions. Currently, Chevron holds shares in 4 different mixed-owned companies in Venezuela. I am sure that in very few days, a ship with crude oil will depart towards the U.S., if Chevron gets to a deal within the rules of our constitution and national laws.

But there is another question: Chevron has new facilities in Brazil, Mexico and North Dakota in the U.S. Given these, how much will Chevron really invest in Venezuela? That investment not only influences our GDP. It also affects the revitalization of our engineering and services companies in the energy sector, especially those active in the Orinoco Belt.

My guess is that next year, Chevron will get to produce 100.000 bpd, but that amount basically depends on the investment they’ll make. And if you ask me as an oil expert, whether the terms of the agreement are the best, I would say ‘No’. They are not the best.

But I understand that these are new opportunities to get better agreements in future, once Chevron demonstrates its true readiness for investments. We will see clear in the months ahead.

If this agreement is the first step to lifting sanctions altogether, we will soon see new steps in the financial sphere and an overall re-regulation of relations between the governments of Venezuela and the U.S.