Mali strikes back – at French NGOs and at Francafrique 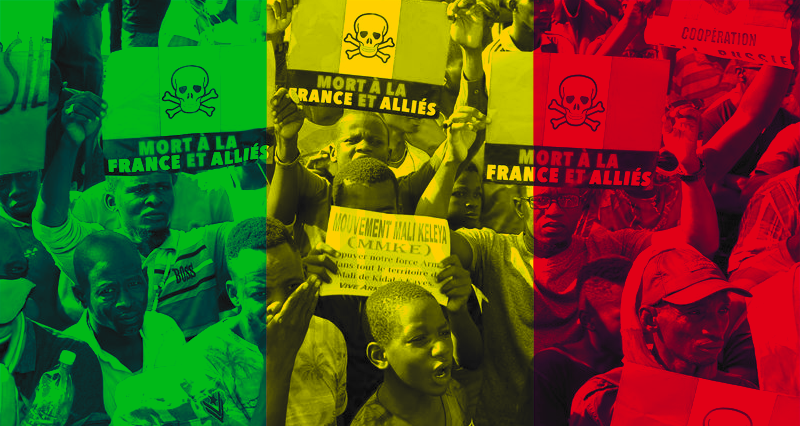 Mali has banned NGOs financed or supported by France. The country’s leadership, led by Prime Minister Colonel Abdoulaye Maïga took such a decision due to the attempt of Paris to influence the internal situation despite the withdrawal of its troops, as well as the general growth of anti-French sentiment in the country.

The ban will affect, in particular, organizations engaged in the humanitarian sphere.

Colonel Maïga justified this decision in a statement posted on social media with France’s recent announcement that it had suspended its official development assistance to Mali. He condemned in his statement the tricks aimed at manipulating Malian and international public opinion in order to destabilize and isolate Mali.

“As a result, the transitional government has decided to ban, with immediate effect, all activities carried out by NGOs operating in Mali with funding or with material or technical support from France, including in the humanitarian field”, he said.

France, naturally, reacted very negatively. “We are dismayed and angry to see French public aid exploited and NGOs entangled against their will in these games of diplomatic relations,” reacted Olivier Bruyeron, head of Coordination SUD, a coalition of groups that includes around 40 French organisations in Mali.

French NGOs at risk of ceasing their activities in Mali include the French Red Cross, Premiere Urgence Internationale (PUI), Humanity and Inclusion (HI), Solidarites International and others. Doubts arose about the non-governmental organization Médecins Sans Frontières, because formally, its French branch does not work on public funds. But it is likely that the military government may decide to abandon these services imposed by Paris.

France has traditionally blamed the Wagner PMC for its troubles on the continent. As we have written before, such accusations are due to their own incompetence and an attempt to shift the blame for their own long-term failures (the failure of operations Serval / Barkhane with the subsequent growth of terrorism).

The French invaded Mali in the 1880s and gradually colonized the territories, suppressing local rebellions. Only in 1960 did the Republic of Mali declare independence – but it was only by word of mouth. In the 1990s, the country was involved in international institutions (in particular, the IMF), which exacerbated the already weak economy of the country.

Then the country became hostage to the situation in Libya in 2012, and the chaos led to the strengthening of local Islamists. Since 2013, France launched Operation Serval against extremists, but under the guise of protecting local residents, in fact, was engaged in a legal and quiet looting of the country’s resources. This confirms the fact that the presence of the French military has not only failed to eliminate the problem of Islamist groups, but has exacerbated it.

The military in Mali came to power through a coup in August 2020, determined to take the initiative to protect and preserve the state. Since that time, the new government is actively looking for alternative defense and economic partners, choosing China as one of the main investment and trade partners, as well as Türkiye and Russia in the field of security. In particular, Turkish Foreign Minister Mevlüt Çavuşoğlu, who visited Mali on September 10 almost immediately after the August coup, met with members of the National People’s Salvation Committee, and Bamako also voluntarily hired the Wagner group to help. Remarkably, Çavuşoğlu was the first foreign official to receive the attention of the new government.

The result is obvious: France had to withdraw. On February 17, 2022, the withdrawal from Mali of troops from the countries of Operation Tacuba, including France, was announced, and on May 3, 2022, Mali broke its defense agreements with France.

And now NGOs claim to be working with “humanitarian aid” for the affected people – after having themselves contributed to the destabilization of the country.

France itself is hypocritical: it suspended financial assistance to development programs in Mali on November 17, as a punishment for its cooperation with other countries. Representatives of the government and civil society of Mali assessed such steps as an attempt to use aid as “blackmail”.

Following France, other players – Germany, Britain, Sweden and Lithuania – are withdrawing from Mali and many African countries.

At the same time, France’s western allies – the United States – have supported and are supporting the persecution of Mali, wanting to put it in the position of an international pariah. In particular, 45 African leaders, Burkina Faso, Guinea, Sudan and Mali were not invited to the US-Africa summit to be held by President Joe Biden on December 13-15.

Thus, France, losing its own position, is venting its anger on uncontrolled regimes, enlisting the support of U.S. imperialists. In Africa, they respond with mutual hostility. A wave of protests has taken place in Mali, both against the military presence and in general against the concept of France in the continent: the French ambassador to Mali has already been expelled, and Emmanuel Macron has decided to stop the military operation. The anti-French wave is also regularly supported in Burkina Faso, whose capital, Ouagadougou, saw mass demonstrations outside the French embassy the day before. French Defense Minister Sébastien Lecornieu now notes that he does not rule out the withdrawal of French troops from Burkina Faso as well. And perhaps the only country they are now counting on in terms of military presence is Niger: of the 3,000 French troops stationed in the Sahel since the end of Operation Barkhan, 1,730 are stationed there.

Alternatives for a Free Mali

Against the background of vacuum in the search for partners, Mali began to strengthen relations not only with the Wagner group, but also with the official Moscow. Recently, the authorities of Mali announced an agreement of cooperation with Russia, along the lines of the Interior Ministry. The agreement was signed during an official visit to Moscow of the Minister of Security and Civil Defense of Mali, Daoud Aly Mohamedine. The diplomats agreed to deal with security, natural disasters, anti-drugs and training together.

Pakistan, Bangladesh and India are also new alternatives that have announced plans to deploy their helicopter units.

And, naturally, Africa has appreciated Türkiye’s contribution to the continent’s military security. Since the 2000s, cooperation with African countries has only grown stronger, and the trend is intensifying: In the summer of 2022, the Turkish president and the head of Mali discussed bilateral relations between the two countries as well as regional issues in a telephone conversation during the transition period.

Recep Tayyip Erdoğan exchanged views with the leadership and stressed that Türkiye will continue to support Mali in the political transition period, as well as – in the fight against terrorism. Türkiye is also acting in its own security interests: the conversation mentioned the terrorist organization Fethullah Gülen (FETO), which, at Ankara’s request, is to be blocked in Mali.

Meanwhile, African states are increasingly acquiring Turkish drones to combat armed groups – one of the most popular items is the Bayraktar. Ankara has already helped Togo, Niger, Ethiopia, Morocco and Tunisia, among others. Particularly in the case of Togo and Niger, Türkiye’s active participation can reduce dependence on a close partnership with colonial France. In addition to military equipment, Türkiye, like China, is investing in infrastructure, transport and business development.

From Ankara’s perspective, there are attractions: drone diplomacy and military partnerships have become an important tool in President Recep Tayyip Erdoğan’s sub-Saharan foreign policy, complementing longer-standing strengths such as building airports and other key infrastructure.

Mali has long had good relations with Türkiye: The Turkish embassy in Mali was opened in 2010, but the most active phase began in 2021, resulting in a more active foreign policy – summits, direct diplomatic visits, closer political and economic relations. It was this partnership that partly caused the conflict between Türkiye and France, whose interests affect not only the Sahel, but also Libya and the Eastern Mediterranean. In addition, Ankara has picked up on the critical discourse of Paris’ neocolonialism that has long been rife among Africans themselves. Amid such sentiments, Erdogan does not forget to emphasize France’s failures in Libya and the Sahel (Operation Barkhane) and to portray France as an “agent provocateur” who, in addition, supports the Syrian Kurds.

Going back to the topic of the withdrawal of humanitarian organizations: Mali, and in this aspect, will definitely not go away without French overseers, who only complicate the security situation and conduct gray schemes to the detriment of the local population. Not only the French can carry out humanitarian missions: for example, the Turks, in particular the activity of the IHH Humanitarian Relief Foundation, also carry out such missions. These include the construction of mosques and medical centers in Mali’s cities, schools, and in the future, new projects.

There are many other humanitarian organizations from Türkiye active in Africa: the Turkish Cooperation and Coordination Agency (TIKA), the Presidency for Turks Abroad and Related Communities diaspora agency, Maarif Foundation, Yunus Emre Institute.

Türkiye could thus replace France in providing humanitarian assistance to the people of Mali. By cooperating with alternative partners, Mali will truly acquire a multipolar dimension, despite the sanctions, pressure and attempted isolation from the United States and the European Union.