Renewed US criticism of the S-400 deal: What it proves about Türkiye-Russia and Türkiye-US relations 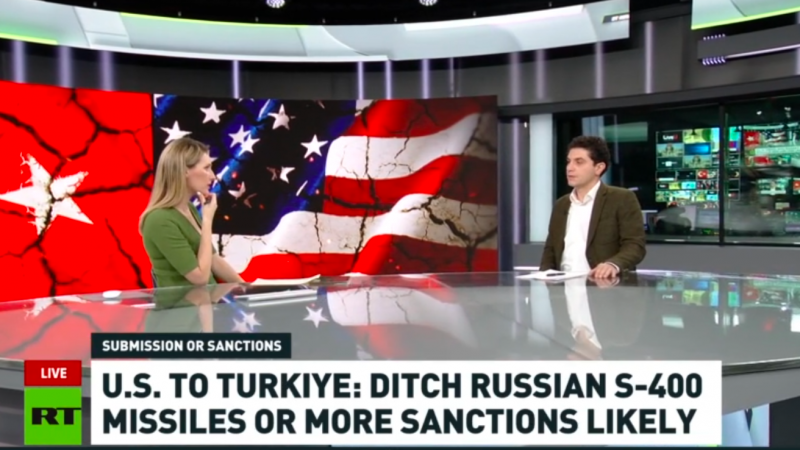 Political scientist and United World International author Onur Sinan Guzaltan was the guest on Russia Today TV channel on 25 November. Güzaltan made evaluations on Türkiye-Russia relations, about which the US has once again raised concerns by criticizing the S-400 deal.

Güzaltan spoke about US-Türkiye relations and their possible future, Türkiye’s cooperation with Russia and other countries in the region, and Türkiye’s fight against terrorist organizations.

The reason behind the Turkish Armed Forces’ operation

Does Türkiye not have the right to buy weapons from whomever they like?

First of all thank you for invitation. It is always a pleasure to be here with you.

About your question, firstly, I have to say that Türkiye is an independent country, and surely has right to buy weapons from whoever it wishes to, or to cooperate with any country in accordance with its strategic plans. That is what the Turkish government is doing now with the S-400 deal, which started in 2016. And in 2019, Türkiye got the first part of S-400 missiles. About three months ago the second part of the negotiations began.

The main reason behind this discussion is the following: The Turkish Armed Forces launched an operation in the north of Syria and the north Iraq against PKK/PYD/YPG terrorist organization, which is directly the pawn of the US. At the moment Turkish Armed Forces started this operation, we began to talk about S-400 deal again. That is not a coincidence.

‘Türkiye is the only NATO country that deals with Russia’

A lot of people would be wondering why the US feels that it can dictate Ankara what it can and can’t. Is it because that they are parts of the same NATO block or what?

Surely, Türkiye is a member of NATO for a long time. But Türkiye is the only NATO country that deals with Russia. The Turkish government didn’t take part in the sanctions against Russia, as did the other Western countries or other members of NATO. Türkiye still continues its corporation with Moscow. That’s the reason why the US is trying to make pressure on Türkiye. It is an attempted sabotage on Türkiye-Russia relations. The Turkish state, the Turkish armed forces, the Turkish government and also the Turkish people have a mentality of independence, so Türkiye continues to cooperate with Russia.

Cooperation in the Eastern Mediterranean

And how do you see the things developing between Türkiye and Russia in terms of military corporation?

S-400 deal is only a part of a broad cooperation. The two countries cooperate in Syria and Libya. I think that the Eastern Mediterranean can be a new field of corporation between the two countries. Russia is the military base in Syria so we can say that Russia is in an active position in the Eastern Mediterranean. Now the US is trying to build in auntie Turkish block there. Türkiye-Russia cooperation can stop the US influence in the region.

When it comes to what the US attempts to Türkiye; which weapons it can buy from whom, what is the reason for that? Is that just the financial aspect for them? They want Türkiye to buy from them, but not from anyone else?

Currently Türkiye is shifting its main political axis. Türkiye is a part of NATO and has been for 70 years, but on the other hand we are cooperating with Russia and Iran. A few days ago, the Cuban president was in Türkiye. We are also developing good relations with other Asian countries. What I mean is that most of these countries are on black list of the US. S-400 and other arguments of the US are just excuses. What the US wants actually is to prevent Türkiye’s shift of axis and foreign policy.

‘The US and NATO are supporting terrorist organizations’

Türkiye has long been considered on the black sheet of the US and NATO block. Why do you think is it that Türkiye wants to expand and strengthen its military force outside of NATO?

Clearly Türkiye-US relations seem to be increasingly turbulent especially given the current political climate. What does the future hold for this relationship?

The US doesn’t want independent and strong countries in our region extending from the Balkans to West Asia. Let’s take it from 1990. The US attacked Yugoslavia and this ended up with the dissolution of the country. After that, the US occupied Iraq and divided the countries into parts. And today the US is attempting to the same in Syria with war, in Iran by destabilizing them.

Türkiye is also one of the main targets of the US. The US does not want a strong Türkiye in the region because the US’s main project is to create so called “Kurdistan” – but it has nothing good to do with Kurds, then we name it as the “Second Israel” – in the middle of Türkiye, Syria, Iran and Iraq. But Turkish army and state is resisting to that project. That is the reason for increasingly turbulent relations between the two countries.

And probably in the near future these developments will end up with the withdrawal of Türkiye from NATO.

Thank you very much.