Begging for some football in Qatar! 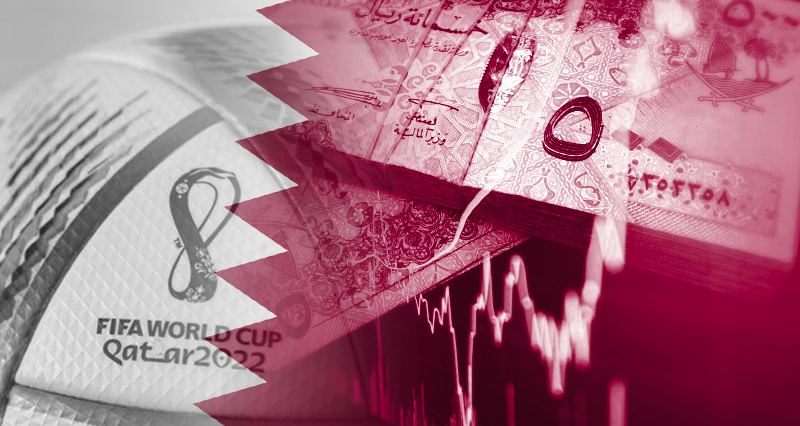 All the globally known football players that were transferred into the Qatari national football league with millions of dollars of checks failed to bring any significant football culture to the country after all these years. Still, Qatar qualified for the World Cup back in December 2nd 2010, albeit with the most controversial qualification process in World Cup history. Held for the first time in an Arab and Muslim majority country and for the first time during in the winter season, this glorious tournament is also known for being the most expensive event that ever took place. While the previous World Cup in 2018 has cost the host country Russia 11.6 billion USD, Qatar has spent around 300 billion USD since the qualification 2010, according to the statistics from Bloomberg, one of the prominent financial information sources in the United States. Forbes however, gives out a slightly lower amount of 229 billion USD. And the expected revenue is like a drop in the bucket: 5.4 billion USD.

Of course, there is no doubt that Qatar being not a real football nation, there are huge gaps between expenditures and revenues. It can also be said that Qatar is one of the countries that has the lowest chance for organizing a World Cup when only considering in terms of its football history, football environment and infrastructure.

Being established in 1973 with 14 teams, the Qatari National League has nothing to offer or has anything interesting despite the number of all foreign stars in the field. It is also not quite possible to speak of any success stories or an important football player that Qatar raised up. On the other hand, seven of the eight stadiums that host the World Cup games have been constructed out from scratch. Some serious improvements were made in the infrastructure of cities, with all the metro lines, airports, hotels, hospitals, shopping centers being built. This tiny but wealthy Middle Eastern nation, whose population of 2.6 million is made of 1.8 million foreign immigrant workers, did not hesitate to break the bank until the end, and at a record level just for the sake of football. And it is quite well known that football is never just the football!

Transforming almost an entire country just because of football has a different meaning for Qatar, even though the facilities will never work at full capacity again and the stadiums never will be full again, after constructing a lot of new stadiums for a month-long tournament.

The British sports reporter David Conn says in his 221-minute long Netflix documentary called “FIFA Uncovered” – released just a couple days before the start of the World Cup – the following:

The documentary is prepared entirely from an anti-FIFA and anti-Qatari point of view, pointing to many facts but interpreting the events from the point of view of the United States and even the FBI. Remember that the US will be one of the hosts of the World Cup in 2026 along with Mexico and Canada. Still, Conn’s words emphasize an important fact. Qatar, which has no football tradition and whose ratings in reports on world cup candidates are very low, has indeed played a major role in the process of persuading FIFA, the throne of the football trade, to become a “banker of football”. It is also known that it uses this power step by step and patience at every opportunity and resorts to the formula of football and capital in his effort to create a nation.

Just to give two examples…

The Barcelona team shirts and the truth of PSG

One of the most important features of the Barcelona FC was that it never put up any advertisements on its team jersey. Traditions of this Catalan football club did not allow any advertisements that would allegedly spoil the classiness of the team’s maroon-navy blue barred jerseys. This tradition of was first broken for an UNICEF ad in 2005, free of charge. The next came after a 170 million Euro sponsorship deal signed with the Qatar Foundation in 2010. And the club’s agreement with Qatar Airways in 2013 was worth 180 million Euros.

Let us also add the Paris Saint-Germain FC fact to this… As it may be remembered, luck of this football club, which back then had a very difficult time in the French National League and even struggled to stay in relegation, has suddenly turned when Qatar Sports Investments bought the majority shares in 2011. The magic touch of the Qatari funds soon paid off and thanks to huge transfers such as Zlatan Ibrahimovic, Thiago Silva, Edinson Cavani, Kylian Mbappe, Neimar, Lionel Messi, the club has won eight titles in the next 10 years. Let me also mention that the club is in first place this season as well, being five points ahead of its closest rival.

The highest bid for football

When Joao Havelange, one of FIFA’s legendary presidents, took office in 1974, he openly said: “I came here to market a product called football to the highest bidder”. Havelange, an entrepreneur owning a shipping company and also active in insurances and arms, is known for making FIFA one of the largest multinational companies in the world thanks to the sponsorships of both Coca-Cola and Adidas. Traditionally, 16 countries participated at the world cups. But in the championship of 1982 in Spain, that number was raised to 24, and later in 1998 to 32. Considering the fact that a total of 48 countries teams will take part in the tournament in 2026, it is pretty clear how well this “product” was marketed.

However, it is no secret that after Havelange, a large scheme of bribes has begun to appear within FIFA. It is also a fact that this scheme has not lost any momentum under the leadership of Sepp Blatter, and that it was well understood by the whole world what kind of corruption, self-interests, greed, tricks, betrayal were made and that promises were not kept within the “FIFA family” after the scandal in 2015.

The Uruguayan writer Eduardo Galeano, in the chapter titled “The Feudal Lords of the Ball”, in his classic book “Football in Sun and Shadow”, underlined the phenomenon of FIFA, the World Cup and the monopolies of corporations:

“It is quite natural that a mechanism that markets every single excitement and passion to not make the absurdity of choosing the one that offers the most useful or the most healthy products for the world of sports. The one who makes the best suggestion has the right to eat the cake; and what matters here is whether Mastercard pays more than Visa or not, or whether the Fuji film gives better subsidies than Kodak or not. No athlete is ever deprived of the ‘very nutritious’ elixir named Coca-Cola, that is always at the top of the list, since it has ‘millions’ of indisputable health benefits”.

We can see billions of dollars at the top of the FIFA’s and Qatar’s relationship with football. The British comedian Lee Nelson’s protest of throwing a handful of counterfeit dollars during the press conference of FIFA President Sepp Blatter, who was forced to resign in July 2015, while the biggest corruption investigation in the football history was still going on, could be a reflection of this situation.

Whatever these facts, which are more than enough to get people off from a “good game”, hundreds of millions of football fans in Qatar 2022, will only focus on football and not to the billions of dollars thrown, and will live their lives with football even if FIFA is out of game. And I am quite sure that these words from Galeano will keep resonating in the hearts of true football fans around the world and those who still stand for the real football:

“I am a simple football beggar. I have my hat in my hand, I travel around the world and beg in stadiums: I am begging for a good game, please, for the love of God!”