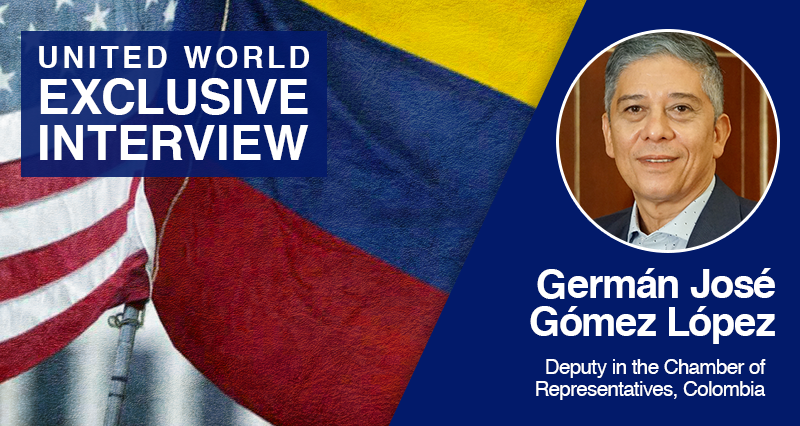 Colombia has long been the best ally of the United States in Latin America. But the election of left-wing Gustavo Petro to the presidency has raised questions about relations between Bogota and Washington, while opening new contacts to neighboring Bolivarian Republic of Venezuela.

We spoke about both of these relations with Germán José Gómez López. He is a member in the Colombian Chamber of Representatives for the Communes Party and a former member of the Colombian FARC, who participated in the signing of the Peace Accord with the Colombian government in 2016.

I interviewed him in Mexico City.

How do you describe the role of the U.S. in the peace accords?

The United States’ government participated in the Peace Accords agreed upon in La Habana between the Colombian government and the FARC guerilla. The Obama administration sent, let’s say, an international observer. And that person has made quite a contribution.

We were always of the opinion that the U.S. was, directly or indirectly, responsible for the Colombian government’s actions and position. They were always external participant in the conflict.

Hence, we demanded that they assume responsibility and take part in the agreement. We wished their participation would have been greater in the agreement, in the sense they’d be co-responsible for all the damage that was caused in Colombia.

Especially if you consider that the U.S. has financed that war. For instance in the context of the so-called Plan Colombia, and also with all the weapons, equipment and even cash money that Washington sent. With all the surveillance, intelligence they delivered via the CIA, the FBI, the DEA, they always took part in the conflict. Let aside all the activities of the US South Command. Therefore, we thought they should assume a bigger responsibility.

Now, there is a left-wing government in Colombia. Left-wing governments in Latin America are famous for a, let’s say, distanced position to the US. But the U.S. still maintains a strong military presence in the country. How will the relations between Colombia and the U.S. develop?

I think that if the U.S. now needs to sit down with the left to negotiate, it might get to even better agreements than it had before with the bourgeoisie. But for that to happen, these talks must have the character of equality, they must occur without violation of our sovereignty. This must be a dialogue between equals, without countries being subordinated to the United States.

And this cannot be the old way, where the U.S. always imposed on us its economic, cultural and social model, even deciding who would be our political bosses in our own country, accompanied by repression.

An important issue is the normalization of relations between Colombia and Venezuela. Is that part of a Colombian reorientation to Latin American integration? And what is your expectation on how the U.S. will react to that process?

First of all: due to North American intervention, Colombia has long been used as a bridgehead and a trampoline, so that the United States could interfere into the domestic politics of other Latin American countries. This was a very unfortunate role for our country.

But now, with the new government, its new orientation and vision, this role is terminated.

And we as the Party of the Communes celebrate the normalization of relations with Venezuela – which never should have been interrupted. Venezuela and Colombia are more than brothers or sisters; they are Siamese siblings. This is what Simon Bolivar has shown to us.

Washington will surely watch this process with preoccupation. Lots of Venezuelans think that the US policy towards Venezuela will not change.

We as Colombians respect the sovereignty, the right to self-determination of Venezuelan people, and we think that the U.S. has no other choice but to respect that too.

How do you forecast the relations of Colombia with other countries, including those outside the continent?

The world is evolving into a multipolar situation. Due to its bad policies, the U.S. is losing influence in what they call their “backyard”. And the continent is looking toward other doors and paths.

As long as the relations are based on mutual respect and equality, we will not shut the door to any new relation with other countries, like for instance China or Türkiye. We ask ourselves clearly: Why do we always have to focus on the U.S.?