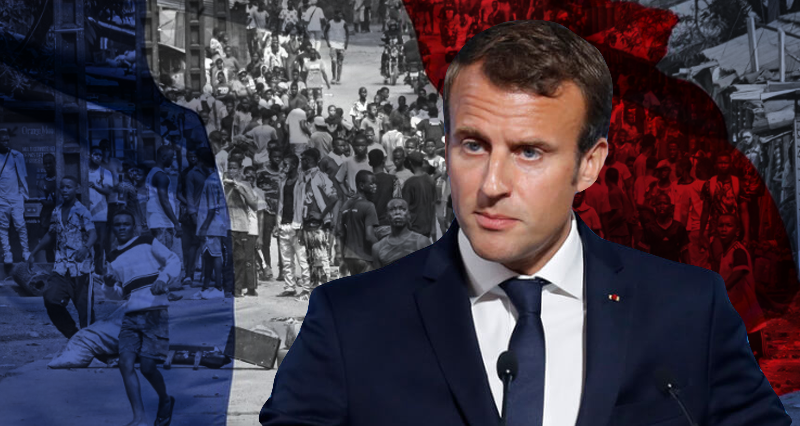 On the sidelines of the International Organization of Francophonie (IOF) summit, held in Tunis on November 19-20, 2022, French President Emmanuel Macron accused Russia of fomenting anti-French sentiment by condemning the actions of the PMC Wagner group cooperation in Mali and the CAR.

Macron accused Russia of following personal interests and a “plundering project” in African countries, where France has recently suffered military setbacks and generally lost its former influence, from diplomacy and cooperation to declining interest in the French language on the continent. Meanwhile, Africa is establishing increasingly close military and economic contacts with other alternative partners, among them Türkiye.

On the sidelines of the summit, the president made the following comment to TV5 Monde:

“This perception, it is fed (…) by others, it is a political project. I am not fooled, many influencers, including sometimes people on your sets, are paid by the Russians. We know them.”

“Several powers, who want to build influence in Africa, develop this to damage France, damage its language, make people doubt, but above all go for interests,” he said.

According to him, Russia’s policy in the African region is “predatory,” fueled by anti-French propaganda.

“It is enough to go and see what is happening at the moment in the Central African Republic or elsewhere to see very clearly the Russian project that is at work there when France is pushed around. It is a project of predation”.

Thus, according to Macron, a number of powers are strengthening their position in Africa in order to hurt France’s interests.

Meanwhile, it should be noted that the summit was held in a mood of disunity. As Africa News notes, the event took place against a background of growing instability in the Sahel, despite years of French Operation Barkhane, and in general popular discontent in Francophone Africa, with protests and demonstrations. Also adding to the tension of the summit was the demonstrative confrontation of DNC Prime Minister Jean-Michel Sama Lukonde with Rwandan President Paul Kagame, who refused to be photographed side by side. And this despite the presence of a neocolonial “patron” in the person of Macron, who proved unable to resolve even such a local diplomatic conflict.

There, too, during the conference, they acknowledged the decline in the popularity of the French language. Macron himself noted that in North Africa, the use of French has declined over the past few decades. At the summit, Louise Mushikiwabo, secretary general of the OIF, was also forced to acknowledge the paradox of Francophonie: the number of French speakers is increasing in demographic terms, due to the actual population growth, but at the same time the French language learning is decreasing. It went so far that Macron called for a “reconquista” of French in Africa (“We must have a reconquest project”), thus emphasizing Paris’ neocolonial ambitions.

Macron declared that for the African continent French “is a real universal language,” and “Francophonie is the language of pan-Africanism. But when the real pan-Africanist Thomas Sankara recognized the unifying role of the French language as a tool, he did not mean to enslave the continent at all – and what Macron wants from Africa clearly goes beyond mere linguistic interest.

Thus, the emerging crisis of Francophonie in Africa calls into question the competence of the IOF itself, which has been promoting French since the 1970s, and, on a broader level, is part of a naturally growing disillusionment with the very concept of Françafrique.

But the crisis of the French language is only the tip of the iceberg. Much more obvious is the growing dissatisfaction with French colonial policy on the continent in demonstrations. Among the most active are representatives of Mali. In September, the Prime Minister of Mali, Abdoulaye Maïga, was not afraid to criticize the policy of Paris from the rostrum of the UN and called the French authorities “junta in the service of obscurantism,” accusing them of “neocolonial, condescending, paternalistic and revanchist practices.

No less harshly against Macron’s policies was the well-known Swiss-Cameroonian activist Nathalie Yamb. According to her, France still treats Africans as subhuman:

“France is only great when it climbs on the shoulders of Africa… It is against our commitment to the emancipation and respect of African men and women that Emmanuel Macron has decided to go to war and reaffirm that we, the people of Africa, are sub-humans, animals, incapable of thinking, deciding and speaking for themselves!”

She also criticized the “racism, the condescending racialism of Macron and the French and European political class towards Africans”.

As proof of her righteousness, Madame Yamb was subsequently officially banned from entering France by the Macron government, according to Monde Afrique.

Just recently in November, during anti-French demonstrations in Burkina Faso, led by Captain Ibrahim Traoré, protesters called on France and its media to leave their country. Moreover, French Armed Forces Minister Sébastien Lecornieu did not rule out the departure of the French Special Forces based in Burkina Faso.

“It is obvious that the review of our general strategy in Africa questions all the components of our presence, including the Special Forces,” said Lecornieu in an interview with the Journal du Dimanche.

Another fresh scandal occurred in the CAR, where Paris was symbolically humiliated by taking away from the French ambassador the privilege of being the “dean of the diplomatic corps. This status, as noted in a press release, was “reserved for French ambassadors,” but they do not apply “reciprocity” in diplomatic matters properly. The title of dean (senior officer) of the diplomatic corps usually belongs to the ambassador who has presented his credentials to his other colleagues.

As Le360 comments, “The rift between Bangui and Paris is therefore only widening further, knowing that anti-French sentiment is increasingly pronounced in the country, as it is in other countries, notably Mali. A diplomatic chill that began when President Faustin-Archange Touadéra called on the Wagner group for all things security in his country.”

The growing anti-French sentiment demonstrates that the hegemonic attitude that is the norm for France on the continent (even under the guise of “decolonization” slogans) no longer suits Africans. They have tolerated long enough the Jacques Foccard-inspired Françafrique, which includes interventions, financial domination, covert operations to eliminate/displace patriotic leaders, etc. And teaching French language and culture in Europe to African elites only strengthened their loyalty to Paris. Also, the military elite was long formed by the French until a series of military coups on the continent.

And from an economic point of view, France was extremely comfortable with the system formed for decades, because it is cheap resources (Africa supplies France with uranium for nuclear reactors from the CAR and Niger), currency control (the CFA franc still remains and French banks “keep” deposits in these currencies) and large benefits for French companies (Total and others). When a country resists, it is subject to sanctions and pressure (like Mali, Guinea and others).

Can Paris easily give up what it has been working on for decades? Of course not. So to cover its own crimes, France blames anyone but itself.

But the key point here is not what France says, but how today’s young Africans perceive its patronage. There is a crisis of confidence, which results in attempts to find alternative partners and to drive French troops out of the region through protests. France is becoming increasingly unpopular in Africa, and analysts say that young French people have a strong hatred of Paris, according to an Africa News article.

Meanwhile, the official failure of Operation Barkhane already implies the withdrawal of French troops from the Sahel – but despite criticism, several thousand soldiers remain there. Although the military has left Mali, the French are trying to hold on in the region at the expense of Niger. And by retaining military influence, they expect to maintain economic privileges. It is for Mali, in the first place, that Paris is angry with the Wagner group, which were voluntarily invited by Africans to protect their own lands: it prevents France from destabilizing the situation with impunity and quietly plundering rich resources of the country.

Naturally, in such circumstances, alternatives are sought for. In particular, Turkish military products are growing in popularity on the continent: in recent years, Türkiye has carried out a record number of arms sales to African countries – combat drones, attack helicopters and turboprop aircrafts (the main buyers of drones were Algeria and Morocco, TAI Hutkus – Niger, Chad and Libya, ships – Nigeria, drones – Ethiopia). And this is just a fragment of the expansion of Ankara’s influence: It is accompanied by the strengthening of political, economic and security ties. Türkiye’s defense and aerospace exports to the continent have more than quintupled, to $460.6 million in 2021 – up from $82.9 million in 2020.

The reason for the success is not only the quality, but also the good price, shorter delivery times and lack of bureaucratic problems, Africa noted. As for economic cooperation, Africa and Türkiye are taking more and more large-scale projects: in particular, in October 2022, the country agreed with Libya to jointly develop the Mediterranean gas shelf in order to meet energy needs as well.

This is accompanied by the strengthening of ties at the highest level of leadership: the day before, the Turkish President Erdoğan said Ankara will contribute to sending free grain to needy African countries. Earlier, Turkish Foreign Minister Melvut Çavuşoğlu made a series of visits to West Africa in October 2022, including Benin, Senegal and Ghana. Çavuşoğlu’s meetings focused on Türkiye’s “soft power” and humanitarian aid in Benin, as well as discussing the promotion of military assets, imports and industrial trade.

Thus, the policy of mutually beneficial cooperation is not “predatory,” as Moscow is trying to accuse Paris of. Africans are in a position to decide for themselves with whom and on which issues they are more profitable and comfortable to interact. Given the crisis of confidence in Paris and the failure of the Françafrique confederation itself, it is not surprising that Africa is looking for interesting proposals from China, Türkiye, Russia and other states.

As the authors of the article “Shaking Françafrique off the shoulders of Africa” said on Anadolu: «Françafrique’s bloody history causes much more than a crisis of confidence between France and African states today, it weakens the hegemonic ties as well.»