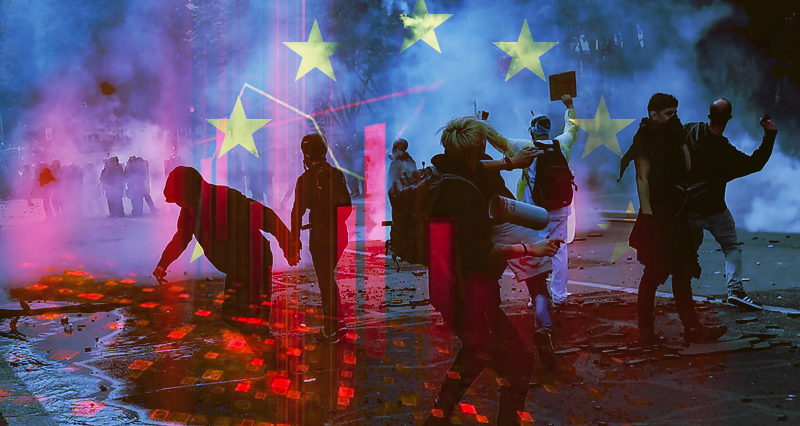 Inflation in Germany in October exceeded expectations and hit a new record of 10.4 percent, driven by high increases in energy and food. More than 200,000 workers took part in warning strikes and protests at factories in the metal and electricity industries last week.

Since the beginning of the warning strike, around 96,000 metalworkers have supported IG Metall’s demands, and since mid-September around 162,000 metalworkers have taken part in nationwide demonstrations. The union is demanding an 8 percent wage increase over 12 months for around one million workers in the metal and electrical industry in the state of Baden-Württemberg.

Eleftherios Tolmidis, IG Metall representative in Stuttgart-Sindelfingen, Mercedes-Benz’s largest production plant, said: “More than 19,000 colleagues from all shifts participated in the warning strike. We are proud of that! And it was just a small part of what will happen in the next few weeks. Because now we will gradually increase the pressure until the employer finally meets our demand for an 8 percent increase. 800 office workers at various positions participated in the digital warning strike at the Daimler Truck AG headquarters in Stuttgart.

Wage increases are not keeping up with inflation

Last Tuesday, IG Metal Kueste called on workers to strike at 15 factories, including Airbus in Hamburg.

German airline Lufthansa reached an agreement with the Union of Independent Cabin Crew Organization (UFO) to increase the monthly salaries of cabin crew by 250 euros from January 2023 and by 2.5 percent from July 2023.

In response to high inflation, the government introduced an option named ”Inflation Premium”, which allows companies to give their employees premiums of up to 3,000 euros.

Meanwhile, in eastern Germany, thousands of people from left-wing and right-wing populist groups protested in October against rising energy and food prices, as well as the cost of living and unfavorable economic conditions caused by the Russian-Ukrainian war.

Especially in the last decade the migration flows to Europe, caused by the Atlantic system’s attacks on West Asia and North Africa, have dramatically impacted working life, particularly in Germany and France. The rate of subcontracted workers in Germany’s big factories has reached 80 percent. For example, in Stuttgart-Sindelfingen, one of the largest production plants of Mercedes, about 8,000 of the 10,000 workers in a shift are employed through subcontractors (Zietarbeitsfirma) with intense wage exploitation. Inflation and the cost of living hit this group the hardest. In his speech at the strike, the union leader declared that they see this situation as “modern slavery” and that workers in this status are deprived of many rights.

France is one of the countries with the highest number of protests and strikes in Europe. Recently, tens of thousands of people marched in Paris demanding wage increases. Rising energy prices have triggered inflation and the cost of living. Strikes, especially in the transportation sector, interrupted daily life. In different cities, mainly in Paris, employees from different professions organized demonstrations demanding wage increases. The country’s largest labor union, CGT, announced that 300 thousand people participated in the demonstrations across the country and more than 70 thousand people in Paris, while the Ministry of Interior declared this number of participants as 107 thousand.

The strike organized by the CGT and different unions representing RATP (the institutions responsible for public transportation in and around Paris) employees, disrupted suburban trains and metro services. Half of Paris metro lines were closed and people had to go to work on foot.

‘I hope people can travel this Christmas without disruption’

Inflation in the UK continued to rise mainly due to energy and food prices and peaked at an annual rate of 10.1 percent in September, which is the highest level in the last 40 years.

Several labor unions in different sectors have decided to organize strikes in recent weeks because of the offered wage increases that fall short of the rate of inflation.

In addition to the strikes, thousands of people have been demonstrating against the cost of living and austerity policies across the country, especially in London.

Around 100,000 public sector employees belonging to the Public and Commercial Services Union (PCS) voted in favor of a strike. The reason is their discontent with government’s spending plans. In the statement titled “PCS response to the autumn statement” on the official site PCS writes:   “Today chancellor Jeremy Hunt outlined the government’s spending plans which are a monumental slap in the face for PCS members. There was no inflation-busting pay rise and there will be eye-watering cuts to public services. With the crippling cost-of-living crisis set to continue and a looming recession, the government is heaping more misery on to hardworking people.” (17 November).

Calling for a 10 percent wage increase, more favorable pensions and job security, “thousands of civil servants including at the Home Office and Department of Transport will walk out next month in a strike over pay, jobs and pensions”, PCS has announced. And PCS General Secretary Mark Serwotka said “I hope people can travel this Christmas without disruption but that’s down to Rishi Sunak” in his statement.

Wages in Spain below the EU averages

Demonstrations have been taking place in Spain since September demanding wage increases in the face of high inflation, which has reached double digits three times this year.

First civil servants, then labor unions took to the streets demanding that workers’ wage increases be adjusted in line with inflation and that losses in purchasing power be halted. Similarly, pensioners also organize demonstrations from time to time with the same demands.

Arguing that their wages are 20 percent below the EU average, civil servants are calling on the government for a fairer wage increase.

Labor unions have warned the Confederation of Industrialists and Employers (CEOE), which has so far rejected their demands for wage increases during the negotiations, of strikes and larger demonstrations, saying “either wage increase or conflict”.

Currently, employees of airline company Vueling and the railway company Renfe are on strike demanding wage increases. Hundreds of truck drivers belonging to the unofficial Platform for the Defense of Transport, who brought Spain to a halt earlier this year, had begun a new strike on Nov. 14, demanding changes to road freight rules and protesting the cost of living.

According to data from the Organization for Economic Cooperation and Development (OECD), Spain (minus 4.5 percent) has the second highest loss of purchasing power among EU countries following Greece (minus 6.9 percent).

Transportation comes to a standstill in Belgium

Almost all labor unions in Belgium went on strike on November 9th to protest against the high cost of living. On the same day, workers held demonstrations.

On November 9, which the unions declared a “day of action”, public services in the country were seriously disrupted, especially public transportation came to a standstill. Employees at schools, airports and some supermarket chains also joined the strike.

Almost half of the flights at Brussels Airport could not be operated on strike day. There were also serious disruptions at Charleroi Airport.

The unions are particularly concerned about the increase in energy prices and are demanding the government to immediately take measures.