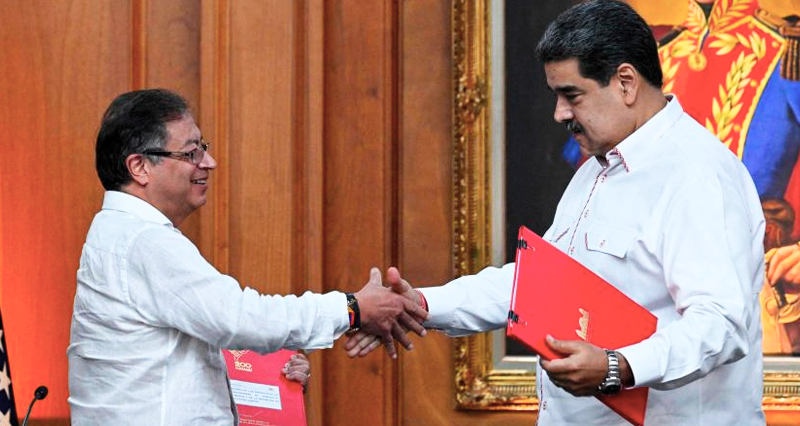 President of the Republic of Colombia

I take the liberty to write to you in order to send you some comments regarding certain opinions that you have expressed in recent days in relation to Venezuela.

My Colombian friends, some of whom are ordinary people, will be able to attest to my unrestricted support for your governmental proposal and the fight you have undertaken to change Colombia in order to lead your people to a much better life situation for everyone.

Surely, you don’t know who I am or you don’t remember me. In the end you are a head of state and I am a “Nobody”, as the Argentine writer Mempo Giardinelli defined himself a few days ago in a similar letter addressed to President Alberto Fernández. If Mempo, who is a colossal writer and essayist, journalist and professor and the pride of Our America considers himself a “Nobody”, what title will be left for me?

We have had the chance for a conversation three times in the past. It was on my part to receive you in Miraflores in 2006 when you attended a meeting with Commandante Chávez. Later, we met in 2009 on the occasion of the elections in El Salvador that brought Mauricio Funes to the presidency. And then again in 2013, when we talked a little more extensively at the Hotel Alba when you, overcoming pettiness and trifles that are not yours, were in Caracas paying the last tribute to Commandante Chávez who had died a few days before. I don’t think you remember any of those moments, much less relate them, but for me, that close but brief contact made me understand some of your thinking. I was particularly impressed by the transparent verbs and the force with which you expressed your ideas before a stranger, who only had the reference of mutual friends.

Out of personal, but also professional and political interest, I closely followed up the electoral campaign and these first 100 days of your administration. I have enthusiastically embraced your “Total Peace” policy, which I believe is the most appropriate mechanism to definitively reverse the spiral of violence that has afflicted your country almost since independence. I acknowledge your courage to carry out such a policy despite headwinds and storms.

As I said before, what I would really like to refer to are some of youropinions in relation to Venezuela, surely made in your desire to establish the best and most fraternal ties of brotherhood. Still, I must state that there have been some approaches that I do not share. First of all, I reiterate that I appreciate and value your great effort and decision to restore ties between our countries at the highest level, however I cannot agree with some ideas that you have issued and that place you on the threshold of intervention into domestic affairs.

In a recent and long interview for governmental French radio and television media, you said a sentence, which that media used as the headline: “The 2024 elections in Venezuela must be a social pact.” No, Mr. President, the elections in Venezuela should be what we Venezuelans decide. We highly appreciate that you have trusted our country to be the guarantor and host of the dialogues that your government will hold with the ELN in the framework of the search for “total peace”, in the same way that President Maduro has welcomed several of his proposals.

Before your electoral triumph on June 20 and also after the first round of the elections that consecrated that the next president of Colombia would chones between you and Mr. Rodolfo Hernández, Diosdado Cabello, Vice President of the United Socialist Party of Venezuela (PSUV) made a clear statement: He said “whoever wins” the presidency in the neighboring country, this will not have repercussions in national territory, because “Venezuela does not depend on who wins in Colombia, we depend on the Venezuelans”. He thus clearly established that it should be the Colombians who should decide at the polls who they wanted to govern them. At no time was there an attempt to evaluate or influence that choice. You also shouldn’t have an opinion about how our elections should be.

On the other hand, “total peace” is not applicable to Venezuela. I understand that none of the armed organizations, that you have proposed should take advantage of this policy – whether they be called guerrillas, drug traffickers, paramilitaries or organized crime – serve the interests of a foreign power or are subordinate to it. This is not the case of Venezuela. Here, a sector of the opposition has defined itself as an apendix of US policy, calling for foreign military intervention, the imposition of sanctions and blockades that have made life much more difficult for Venezuelans in the midst of the crisis. In any country in the world, inviting a foreign power to invade one’s own country is called treason. That has nothing to do with political differences.

Once you were elected president and you visited Venezuela for the first time in that capacity, in the meeting with President Maduro you made a series of proposals that, according to the Venezuelan president, would be carefully studied.

I believe that almost all of them aim to improve and elevate the bilateral relationship and to establish alliances to advance Latin American integration as well as to act jointly in some international scenarios to strengthen the weight of our actions. In particular, your crusade in favor of the protection and salvation of the Amazon jungle is highly commendable.

Your interest in Venezuela’s return to the Andean Community of Nations is also very plausible, from where -according to my opinion- it should never have exited, as I told Commandante Chávez verbally and in writing.

But what I do not share at all is your proposal that Venezuela join the Inter-American System of Human Rights, which is an institution dependent on the OAS, structured under the Monroist aegis of a Pan-American nature. Without wanting to dictate to anyone what they should or should not do: A country called the Bolivarian Republic, out of respect and loyalty to the Liberator and for self-identity, cannot accept institutions that are antagonistic to his ideas and his thinking.

You base your proposal on arguments of a legal nature that even led you to overcome a political accusation made against you by your opponents and detractors. I congratulate you for that. But we could also bring up many, many cases in which the ruling has not been in favor of truth and justice, showing that such said body is political in nature and acts in favor of the interests of the United States. A former president of that institution, the current Chilean foreign minister, now operates as one of Venezuela’s worst enemies in international instances.

You, Mr. President, are a Bolivarian to the core. You have always been. Your words attest to this when you took office as the highest authority in Colombia. When explaining why you demanded that the sword of the Liberator should preside over such a great event, you said: “I spent muy entire life and my whole existence to get here, next to this sword. This sword represents too much for us. And I want it to never be buried, I want it to never be crossed again. That it only be sheathed, as its owner, the Liberator, said, when there is justice in this country.”

You, Mr. President also said during your visit to Caracas: “It is unnatural for Colombia and Venezuela to be divided. This occurred at some point in the past. It cannot happen again because [we have] blood ties.” The joint declaration signed by you and President Maduro reads: “We are the same, we are mixed with each other by history, by common root, by blood.” Please, Mr. President, do not ask us to betray memory and the Bolivarian ideal that is explicitly indicated in the preamble and in article 1 of our Constitution.

When you came to Caracas, dear Mr. President, you could see that the soldiers of our gallant Presidential Honor Guard, created by the Liberator precisely in Mompox, in New Granada, sang the Colombian national anthem loudly. This is a legacy of Commandante Hugo Chávez who demanded that the troops should learn that song of freedom and life as if it were their own.

Mr. President, when Commandante Chávez proposed and the Venezuelan people accepted in a referendum that our country be called and be a Bolivarian Republic, he did not do so for a mere semantic matter. As I said before, it has to do with our identity. This obliges us to defend, respect, promote and venerate the Bolivarian ideal. For this reason, Mr. President, it seems to me that Venezuela should not rejoin the OAS or the IACHR, beyond any legal argument in favor on these institutions.

If we are Bolivarians and Venezuela is it, we must strengthen our Bolivarian instruments: CELAC and Unasur. Let us take refuge in the human rights mechanisms that we are capable of founding and that we believe in. Let us accept their majesty. It cannot be the United States that dictates what is correct and what is not correct in Our America.

As we are about to enter the Bicentennial year of the Monroe Doctrine, we should banish it forever, in order to build institutions that stem from the genius and figure of our Liberator. Our integration will be Bolivarian and depending on OUR America, or it will not be.

Receive, Mr. President, the expressions of my highest esteem, respect and consideration.