What is the message of the terrorist attack in Istanbul? 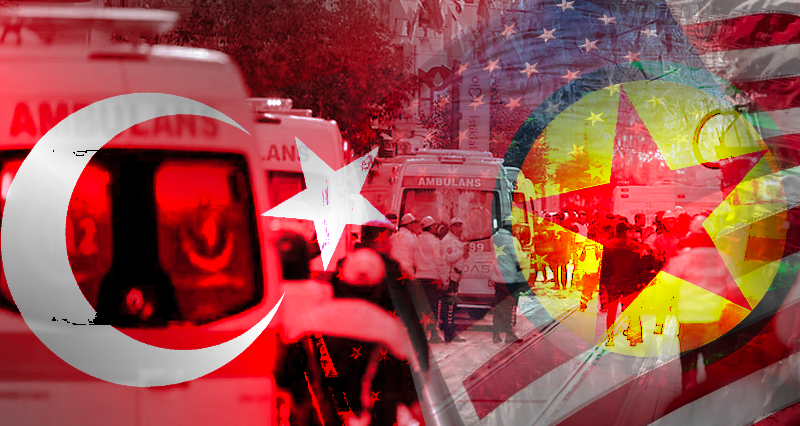 Political scientist and UWI author Onur Sinan Güzaltan evaluated recent bombing attack that took place at Istiklal Street, one of the busiest centers in Istanbul, in an interview provided to RT International. The interview can be watched here.

I would love to get your take on the Turkish Interior Minister’s criticisms of the condolences expressed by Washington. What do you think?

First of all, I completely agree with the Minister of Interior Mr. Soylu. I think the Turkish nation also almost entirely agrees with him, because we know that the United States is providing weapons to PKK, who organized this terror attack in the middle of Istanbul against civilians. We know the US is financing the PKK, not just in the Northern Syria but also in many other countries including Türkiye itself.

Let us be clear on what we known for sure. The Turkish police are holding a suspect. They say it is connected to the Kurdistan Worker’s Party (PKK). But the party itself denied responsibility for the blast. The investigation is still ongoing of course. Let us comment on this statement form the Turkish Interior Minister’s perspective. Where does this leave the relations between Ankara and Washington?

Türkiye and the US already have strained relations for many reasons. As I have already told you, the US is supporting the terrorist organizations such as the PKK. And Fetullah Gulen, the plotter of the coup attempt in 2016, is still living in the US. And the US is still supporting his organizations that are not only in the US, but also the remains of it in Türkiye. Another example would be the following: the United States is trying to create an anti-Turkish bloc in the Eastern Mediterranean together with Greece, the Greek Cypriots and Israel.

Therefore, their support to PKK is just one of many examples. But it is certain that the US has been attacking the unity and the existence of the Turkish state for perhaps more than four decades.

Let us talk about NATO, because we know that Türkiye has recently blocked the ascension of Sweden and Finland into NATO over the disputes regarding the Kurdish nationalists. Do you expect this latest terror attack would affect the situation in any way, the acceptance of these two countries into NATO?

It is the US that leads NATO. And we know that NATO would not exist without the US. So, I think that it will surely affect the relations between Türkiye and NATO. Because it is not just the US but also most of the NATO members that are also supporting terrorist organizations such as PKK, YPG and Fetullah Gulen organization. I think this will become clearer in the next days. As an example, this terrorist who committed this attack in Istiklal Street in Istanbul probably got her military training in camps that are located in Greece. Everybody basically knows that Greece hides military camps for the PKK, while Greece is a NATO member. This so called “ally of Türkiye” is giving military trainings to the terrorists, who in turn act against Türkiye and attack Turkish civilians.

Destabilization attempt ahead of elections

We really appreciate you and your opinions and comments on this, but just to clarify for our viewers, how the investigation into the Sunday terror attack in Istanbul is still ongoing. So, we wait for the final developments in the investigation. In other developments I would love to get your thoughts on what we found out today, was that Russian Foreign Intelligence Chief has held talks with the CIA director in Ankara. What would you make up for these talks between Moscow and Washington, and its timing?

It is interesting that this terrorist attack took place just one day before these talks between the Russian and American intelligence chiefs were held. And as you already know, Türkiye is mediating between Russia and Ukraine, while still being a member of NATO. So, I think the timing of this attack is really important, having a probability of being a message for the mediator role of Türkiye.

This could also be a message for the Turkish authorities. Let us also not forget that Türkiye is just ahead of a presidential election process, either happening in the next May or June. So, the target of this attack could be the destabilization of this election process. And lastly, there are currently negotiations going on between Turkish and Syrian officials for a normalization process between these two countries. One of the targets of this terror attack could be the normalization process between Türkiye and Syria.