For Algeria, “BRICS is an alternative to the Western system” 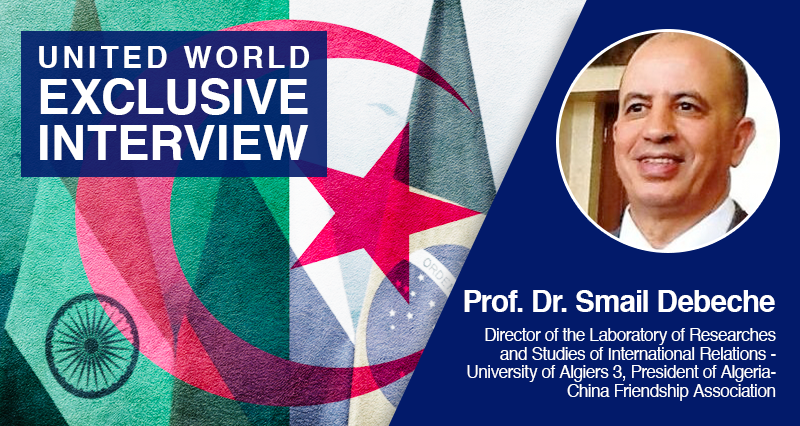 On November 7, the Republic of Algeria has officially and formally applied for membership in the BRICS, the organization comprised of Brazil, Russia, India, China and South Africa.

Algerian President Abdelmadjid Tebboune already had participated in the BRICS summit in June. He was the first speaker on the summit held online, calling for “a new economic order where parity and equity between countries will reign.

In August 1, he expressed openly Algeria’s willingness to join the BRICS.

In first statements, the current members welcomed Algeria’s membership, with Russia and China lending the most vocal support.

Why did Algeria apply for formal membership now, and not before? What are the country’s expectations from a membership? Which perspective does the BRICS membership open up concerning the fight against terrorism, an urgent matter in Algeria’s bordering regions including the Sahel? We asked these questions Prof. Dr. Smail Debeche.

The interview with Prof. Dr. Smail Debeche was conducted via telephone.

How do you evaluate Algeria’s application for BRICS membership? Why did Algeria apply now and not, say, 10 years ago? What has changed?

The Ukraine crisis has deepened the approach to change the one-sided international system. China and Russia, as leading forces of BRICS, have been actively engaged in bringing about an international system different from the existing world system. The West has dictated the current system at the expense of the vast majority of the countries in the world, including the majority of the UN and its institutions. For Algeria any option is acceptable as long as it leads to world justice and providing equal opportunities for the rest of the world outside the Western orbit, enabling them to find political and economic solutions to their problems.

Algeria sees Western military interventions as mainly responsible for the crises and conflicts along Algerian borders: From Libya to Mali and the Western blockade against the realization of the decolonization of Western Sahara through self-determination via referendum.

What is Algeria’s expectation from BRICS membership?

1. Algeria’s understanding and approach of BRICS has already been defined. Based on such a conception and goals, Algeria views the founding members of BRICS (Brazil, Russia, India, China and South Africa: BRICS) as countries with advanced technology and industry that constitute promising alternatives for economic cooperation based on mutual benefits, especially China and Russia.

Currently, Algeria’s foreign trade and economic relations are heavier with the United States and the European Union.

Algeria, especially since the arrival of President Tabboune at the Head of State, has been intensively engaged in finding alternatives to the heavy trade relations with the West, especially in the field of investment and technology.

2. By being a member in BRICS, Algeria will find more cohesive stances with Russia, China, India, South Africa and Brazil, the latter especially now with the newly elected Brazilian President Inacio Lula de Silvia concerning the regional issues in the Algerian regional sphere. For instance, Algeria for a decade by the end of the last century (1990-2000) fought terrorism alone. The West did not support Algeria until terrorism took place in the West itself in the early years of the 21st century. Algeria always insists that terrorism has nothing to do with Islam. Terrorism is an international phenomenon.

Western countries have also a negative stance towards the Western Sahara and Palestine. BRICS countries on the other side have a much better position when it comes to decolonization and non–intervention in the countries ‘internal affairs.

3. Algeria‘s attitude of reforming the UN is founded in the statue of BRICS. The Western colonial countries founded and controlled the UN heavily. The content, policies, international and multilateral institutions…etc all have ben dictated by the Western countries.

Other countries will follow Algeria – such as Saudi Arabia, Egypt, Nigeria and Venezuela

May Algeria’s membership to BRICS open the doors to other countries?

BRICS takes a clear stance against colonialism and imperialism. Therefore, other countries may follow Algeria such as Saudi Arabia, Egypt, Nigeria and Venezuela. Türkiye should also consider being a member In BRICS. The West may not allow Türkiye rising as a regional power. It is important to emphasize that BRICS is not an ideological organization. It is open to different economic systems.

Lastly, I would like to ask you about the Algerian-Chinese relations.

This relation goes very back in history. Between 1954 and 1962, during our Revolution, Algeria had been fighting against colonialism and imperialism. The China has also suffered historically from colonialism and imperialism. Both countries fought against the same enemy. A common struggle reflected after Algeria’s liberation in the latter lending support for China regaining its place in the UN in 1971 and expelling Taiwan from the organization.