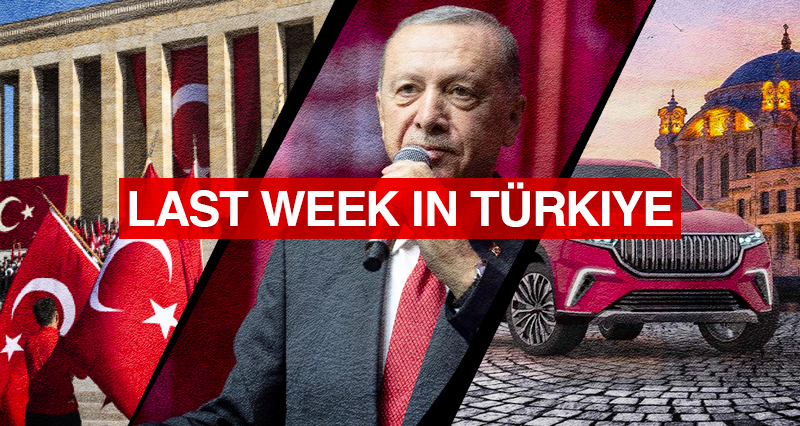 The 99th anniversary of the proclamation of the Turkish Republic, under the leadership of Mustafa Kemal Ataturk, was celebrated with joy all over the country.

President Recep Tayyip Erdogan has announced a new political program under the name of the ‘Century of Türkiye’.

Celebrations for the Republic Day of Türkiye

The 99th anniversary of the Turkish Republic, proclaimed on October 29th 1923 under the leadership of Mustafa Kemal Ataturk, was celebrated with great joy all over the country.

Tens of thousands of citizens of all ages visited Ataturk’s Mausoleum Anitkabir on the 99th anniversary of the Republic. In the events organized all across the country, patriotic citizens have embraced the Republic as unified at hearts.

The villagers from Sarikaya of Sivas Province have put a 400 sq. meter-portrait of Ataturk over the mountain. They have also celebrated the 99th anniversary of the Republic with a ball they collectively organized in their villages.

A 54-year-old citizen who has been engaged in farming for about 25 years in a town of Kirklareli Province, wrote “Republic is 99 years old” on his field with the plow of his tractor and help of fellow farmers in the town.

Sivrihisar Aviation Center in Eskisehir Province prepared a special choreography for the Republic Day. Approximately 1000 people with Turkish flags in their hands took the shape of a crescent and a moon and choreographed it.

Apart from the popular events, many politicians also officially celebrated the Republic Day.

In his message on the occasion of the Republic Day, President Recep Tayyip Erdogan said: “Despite all the injustices and obstacles we have been subjected to, we are laying the foundation of our 2053 and 2071 goals with the carefulness of a chess master. We are determined to build the ‘Century of Türkiye’ on the works and infrastructure we have brought to our country.”

The main opposition leader, Kemal Kilicdaroglu gave his Republic Day message with “The 100th anniversary of our Republic will be celebrated under the leadership of true patriots and real democrats. Be at ease, we will take our country out of this tough bottleneck all together and with all efforts. We will crown our democratic, secular and welfare-state of law, with the jewel of democracy.”

The government-allied MHP leader Devlet Bahceli said in his message: “One year before the 100th anniversary of the Republic of Türkiye, our national heritage that were brought through the depths of our history and reached to this day, will never be harmed or withered.”

The Vatan Party Leader Dogu Perincek also delivered a public message on the occasion of the Republic Day.

“The Republic marks the 100th anniversary of its proclamation.

As a matter of fact, we had practically established our Republic on April 23th 1920, the day we have established the Grand National Assembly in Ankara under the leadership of the great revolutionary Ataturk. In this case, we are actually in the 102nd anniversary of the Turkish Revolution. It is rare that revolutions in numbers and revolutions in reality have a consistence. On the centenary of the proclamation of the Republic, we are in a historical process of finally realizing this Republic with a new revolution.

For the first time since Ataturk’s Revolution, Türkiye is entering the year of facing a new revolution.

Our National Democratic Revolution, which began in the second half of the 19th century, is on the verge of being crowned with an Economic Revolution of Manufacturing. These are the footsteps of the Great Republic and a Productive Nation. “

A new political program from the government: “The Century of Türkiye”

President Recep Tayyip Erdogan has announced a new political program called “The Century of Türkiye”, ahead of the presidential elections scheduled for mid-2023.

The political program announced by Erdogan included a new constitution, new reforms for opposition groups, infrastructure projects and an emphasis on the defense industry.

The details of the program are as follows;

“Among the things we have been trying to achieve, comes are our attempts to save our country from the shame of a coup d’état constitution and to bring it to a completely new, civilian, democratic and libertarian constitution. The lifespan of the 1980 coup constitution, which was prepared to serve the military junta with all its articles, has already expired.”

“We have gathered here today to pledge to strengthen the citizenship of all 85 million of our nation, with exceptions such as convicts of terrorism, violence and hate crimes. We have gathered for the sake of strengthening the public that gives its name to our Republic, that is, our people, as the essential subject of our politics, our government and our economy. We came to confirm our will to raise our country above the level of a modern civilization and to provide our people with all the opportunities they deserve.”

“We have increased the number of our universities from 76 to 208 and the number of academic staff from 70 thousand up to 184 thousand. The number of hospital beds was increased from 164 thousand to 264 thousand. We have completed 20 city hospitals with a total of 28 thousand 987 beds and put them into service. We are still continuing the construction of 13 city hospitals with a capacity of 15 thousand 75 beds. By increasing the number of our health personnel to 1 million 350 thousand, by equipping our health institutions with the most modern tools and equipment, we have ensured that the highest quality service is provided to our nation.”

“We have increased our total number of sports facilities from 1575 up to 4,290. Our student dormitory bed capacities have also increased from 182 thousand to 850 thousand. The amount of higher education scholarships and loans for undergraduate students was only 45 liras when we took office. Now this number stands at 850 liras. It was 90 liras for master’s students, and we increased it to 1700 liras, and for PhD students it was 135 liras, now increased to 2,550 liras. We provide a food assistance allowance of 800 liras to our students staying in our dormitories. “

“Beyond meeting our own needs, we have become a country that can export our defense products to 170 countries, especially the UAVs, land vehicles and naval platforms. By putting an end to our century-old defense deficiencies in the last 20 years, we are carrying our country to the top list in the defense industry.”

“And by creating our National Space Program, we have begun preparations to send one of our citizens to the International Space Station next year.”

Türkiye starts domestic automobile production. With the participation of President Erdogan and many guests at the Gemlik Factory Campus, where TOGG (Türkiye’s Automobile Enterprise Group) brand domestically produce the vehicles, was officially opened on October 29th.

The first demand for TOGG brand cars from abroad came from the Azerbaijani President İlhan Aliyev.

The president told a live broadcast on ATV a Haber that Aliyev wants to buy two cars for himself.

One of Türkiye’s 2023 vision projects, Togg is being greeted with great enthusiasm in the country. After President Erdogan pointed to February for the pre-sale of the car, advertisements with the headline “For sale to buy a Togg” began to appear on second-hand sales platforms. Citizens have already put their existing vehicles on sale on the internet in order to buy a Togg, which will hit the road in March 2023.

Minister of Treasury and Finance Nureddin Nebati said he gave instructions to ensure the accessibility of Togg for the wider population. “Our ministry has already started its work. We spoke to public banks. Ziraat Bank, Halk Bank and Vakifbank and our participation banks will provide the necessary support at the point of access to these vehicles,” he said.