USA and Great Britain: “Fascism must be exterminated” 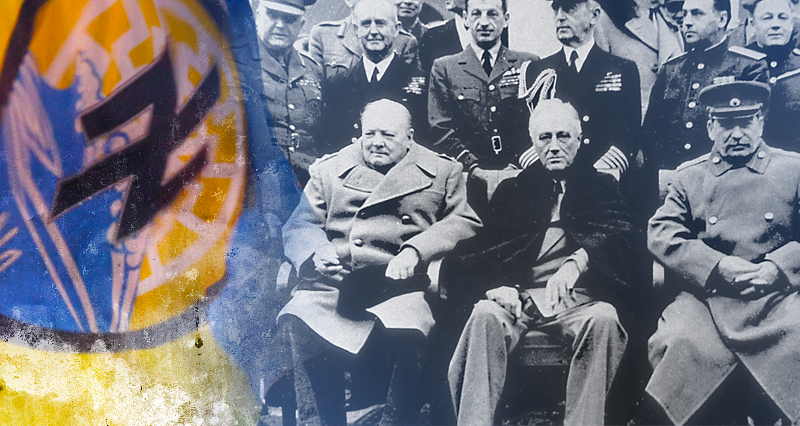 This article is for the sole purpose of reminding. It confronts the strenuous intention of the Western powers to forget the past so that today’s citizens, particularly young people, put aside history, their history, the history of struggle of their parents and grandparents. Hence, it is necessary to remember.

Between 1941 and 1945 (both inclusive) five conferences were held in Moscow (one per year), where high-ranking government representatives from Great Britain, the United States and the Soviet Union (USSR) participated. The third of them was carried out between October and November 1943 when the Nazi troops had already been crushed in Stalingrad and the Soviet armed forces were fully developing the counteroffensive towards the west to liberate their territory.

Diplomats, senior officers of the armed forces and other officials participated in the event, which ended on November 11 of that year, as well as the ministers of foreign affairs of the three countries, who, together with the ambassador of the Republic of China in the USSR, signed a document known as the Four Nations Declaration which included four parts: a declaration on general security, a declaration on atrocities, a declaration on Italy and a declaration on Austria.

Similarly, the conclave was propitious to discuss transcendental issues of world problems, while measures were taken to shorten and end the war. At this conference, for the first time, there was talk of founding a world organization that would guarantee peace on the planet. It was the seed of the creation of the United Nations Organization (UN) that would turn reality two years later, after the end of the conflict.

For the purposes of this article, we will recall some of the agreements made and included in the first two statements. In that referring to general security, the need to establish an international system and an organization based on principles of sovereignty and equality of all States that avail themselves of the support of peace and international security as goods of the entire humanity was recognized.

Likewise, the participants expressed “complete agreement” on Italy: “Fascism with all its evil influence and configuration must be completely exterminated” so that the Italian people would have the power to establish democratic institutions both in the governmental sphere and in any other. To make this agreement valid, the declaration clearly stated that “all institutions and organizations created by the fascist regime” would be suppressed. Likewise, any fascist or pro-fascist element could not exercise functions in the field of public administration. On the other hand, all political prisoners – who were political prisoners for having fought fascism – should be released immediately and fully amnestied.

The declaration also instituted that fascist leaders and high-ranking army officers who are “known or suspected” of being war criminals would be placed under arrest.

After Great Britain, the United States and the Soviet Union showed that Hitler’s troops committed crimes, mass executions and other heinous crimes, and the use of brutal and oppressive methods to dominate and subjugate the peoples of the occupied countries, they warned and solemnly declared that at the end of the war, officials at all levels, as well as those affiliated with the Nazi party who were responsible for these heinous crimes or who had accepted the same, would be handed over “to the countries where they committed their abominable acts, to be tried and punished according to the laws of the said liberated countries and of the free governments established therein”.

A year and half later, the leaders of these same powers Joseph Stalin, Chairman of the Council of People’s Commissars of the Soviet Union, Winston Churchill, Prime Minister of the United Kingdom (since July 26, Clement Attlee, who succeeded Churchill after winning the election), and United States President Harry S. Truman met in Potsdam (near), Germany between July 17 and August 2, 1945 after the war. In this conference held in German territory, in addition to agreeing on how this country defeated in the conflict would be administered, the victorious powers discussed the international order that would be established from that moment on and debated peace and the effects from the war.

Although the agreements adopted were of little use, since just 4 days after the end of the conclave, President Truman ordered the launch of atomic bombs on the surrendered and defenseless cities of Hiroshima and Nagasaki, thus establishing a world order based on on nuclear power, the signatories of the Potsdam Conference stipulated that Germany should be demilitarized, denazified, and democratized. Perhaps it is no coincidence that these are the same objectives proposed by Russia for its special military operation in Ukraine.

In Point 3 (I) of the agreement, it is provided that all German industry that could be used for military production will be suppressed in such a way as to permanently prevent the restoration or reorganization of militarism and Nazism within the armed forces of Germany and including in “all other military or quasi-military organizations, together with all clubs and associations that serve to keep the military tradition alive in Germany”.

In section III of the same point, the need to “destroy [sic] the National Socialist Party and its affiliated and subordinate organizations, to dissolve all Nazi institutions, to ensure that they do not revive in any form, and to prevent any Nazi or militarist activity or propaganda” is stated. In later points, the abolition of the Nazi laws that constituted the basis of the Hitler regime precisely established from the establishment of differences between citizens for reasons of race, religion or political opinion “whether legal, administrative, or otherwise nature”.

In a strict and scrupulous manner, the document makes it clear that all war criminals who have participated in the creation or projection of Nazi companies will be arrested and put on trial. who have committed or are involved in atrocities or war crimes. The same measure would apply to Nazi leaders and prominent promoters and supporters of Nazism and to senior officials of Nazi organizations and institutions.

All this legal and political framework that was built when the war was still in full swing constituted the support that gave rise to the “United Nations Charter”. Article 23 of said document sets out the responsibilities of the members of the UN Security Council for the maintenance of international peace and security.

Article 106 expressly mentions the Declaration of the Four Powers signed in Moscow on October 30, 1943, so that in accordance with the provisions of paragraph 5 of that Declaration, “consultations among themselves are held, and when necessary, with other members of the Organization, in order to agree on the joint action that may be necessary to maintain international peace and security on its behalf”.

However, said Council did absolutely nothing to guarantee peace and prevent the genocide that began to take effect in Ukraine after the 2014 coup d’état. On the contrary, in its eagerness to extend the area of control of its influence towards the east, using NATO, the United States and Great Britain not only promoted and organized the coup of February 2014, but also supported, armed and financed the Ukrainian government that emerged from the coup and that, violating all agreements previous ones that they themselves signed to eradicate fascism and Nazism, stimulated the presence of Nazi formations within the government, in particular the armed forces, thus favoring the “free performance” of extreme right-wing organizations that were created to persecute, assassinate and exterminate the ethnic and religious minorities of the country, which should have been considered a threat to peace according to article 39 of the UN charter. Such actions even violate the very preamble of the great document.

One might wonder to what level of moral degradation the United States and Great Britain have reached in their quest for global domination so that, after having been promoters and protagonists of the anti-fascist and anti-Hitler struggle in World War II, they have now mutated into organizers and financiers of fascism and Nazism, encouraging the Ukrainian government to carry out actions that do not differ much from those carried out by their German counterparts during the Second World War.