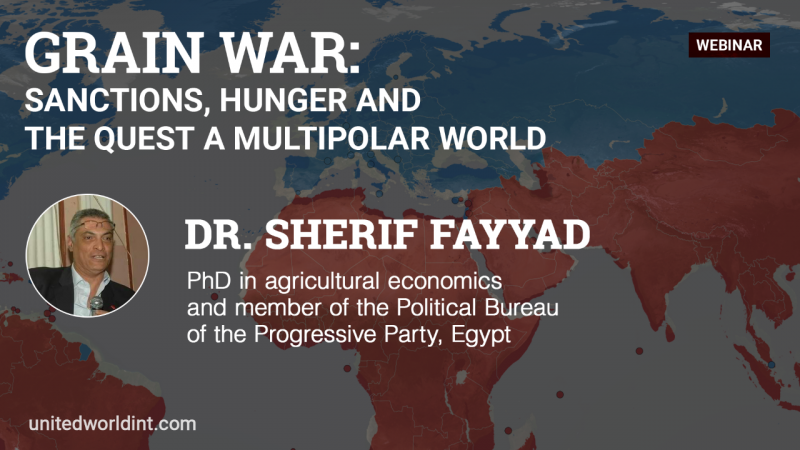 United World International has organized an international webinar on the topic “The Grain War: Sanctions, Hunger and the Quest for a Mulipolar World” on October 24. Speakers from Russia, Türkiye and Egypt made presentations.

Vyacheslav Matuzov, a former Soviet and Russian diplomat and President of the Society for Friendship and Business Cooperation with Arab Countries and member of the Committee of Solidarity with the Peoples of Libya and Syria, as well as Halil Özsaraç, retired Turkish Navy Staff Captain have held presentations that were published before.

Today, UWI presents the speech of Sherif Fayyad, PhD in Agricultural Economics and Member of the Political Bureau of Egypt’s Progressive Party (Tagammo).

The speech was slightly edited for publishing purposes.

I would like to thank all of you for inviting me today to participate in this event, that gathers some politicians from some countries that try to evaluate the current political situation, especially the Russian-Ukrainian war and to explain the false claims of Western counterparts that claim this war had caused a dramatic economic crisis, which the whole world is suffering from.

Also, the Western countries, especially the USA imposed on the Third World countries (that suffer from the economic situation) IMF rules that cause more people (especially the poor and the middle class) to suffer and increased class differences in many countries. In consequence, poverty and chances to accesses to better life for people in many third world countries were reduced a lot.

All this shows that international food and oil prices decreased while the war still continuing, which means that the war is not the main reason for the increasing in the international food and oil prices in the beginning of this year. Quite the contrary, this occurred due to the inflation that happened in the developed countries due the governmental expenditure on health sector, since most of the EU countries discovered how weak there health sector system was during the COVID pandect. And due to their monetary and physical policy, which they applied to increase investments to solve the negative growth rates that occurred during 2019/2021.

So they want to put the responsibility on the Russian side while they are themselves the main source of this economic crisis is happening and that the whole world is suffering from. In addition there is no such thing as the ‘free market’, since the capitalist system plays with the supply and demand to put the price of any commodity according to their needs and there benefits.

Fourthly:  In spite of all this, the Russian side made an agreement to export the stock of the Ukrainian wheat when the international wheat prices was high, in order to help the third world countries to buy wheat and to help the internal wheat price to reduce more. This agreement took place in Türkiye in last July. Since then, the Russian side agreed to the exportation of Ukrainian wheat from the Black Sea ports to the world, and then the world discovered that only 4.5% of this wheat goes to the poorest countries.

This illustrates us the main aim for the Ukrainian side (that is supported from the capitalist countries). The Ukrainian authority does not care about the poverty and hunger in the world, but cares only about joining the NATO, in order to be used by the USA and EU countries, especially Germany, England and France, to threaten Russia and other countries in East Europe that try to have their own developing model. This is the same as what the USA and some EU countries are doing nowadays with China.

So we have to know that the countries that suffer from poverty are manly in Sub Saharan countries and in South Asia. And these regions are being dramatically used by the West for many years since they suffered from the French and British occupation for many years, and still till now since most of this regions, especially Sub Saharan countries, there natural resources (Gold as an example) that were exploited by some of the EU countries and they depend economically on the EU countries epically France.

Finally: I would like to mention that, as long as there is a capitalist system, human exploitation will remain and any attempt from any nation to be independent in their political and economic decisions or to return there right back is taken away. This international regime of the capitalist countries will stop that even by war (Palestinian and Iraq case) or by economic embargo (Russian and China case).

So the unity of the southern countries and the learning and studying of international experiences that have a real and successful experience in independence, like China, Russian and Brazil (during Lula da Silva period), we have to understand and support that to create world with no exploitation and classes, saving the natural resources from being demolished so as to be save it to the coming generations in a nice form, through using these natural resources in an efficient and sufficient way by the people and for the people.

Thanks a lot and have a good day

Member in the Political Bureau of the Progressive Party (Tagamoo)