“Arming Cyprus is the next step to deterring Putin and Erdogan” 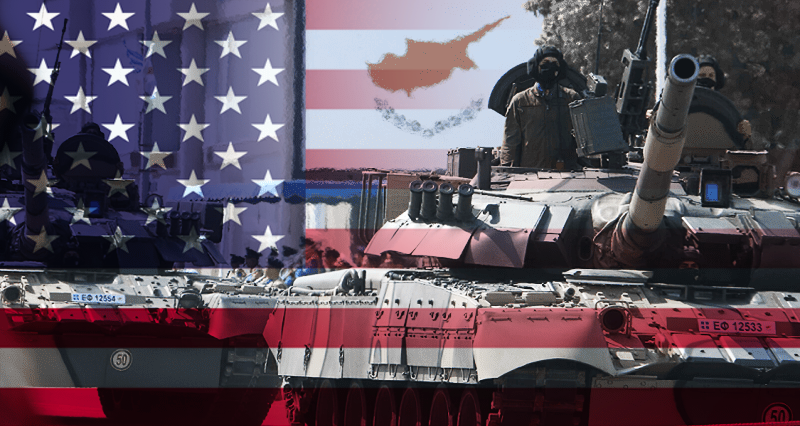 The United States government has recently lifted the more-than-30-years-old-embargo on arms exports to South Cyprus. This move indicates that Washington is preparing a new political-military offensive in the Eastern Mediterranean.

Whom will the US weapons sent to the island target?

An answer is provided by Mark I. Foz and Ari Cicurel in a recent article published on thehill.com. Fox has (ret.) served as deputy commander, United States Central Command and is a member of the Jewish Institute for National Security of America’s (JINSA) Eastern Mediterranean and Abraham Accords policy projects. Ari Cicurel is a senior policy analyst at JINSA.

Below we present to our readers the article as published by The Hill.

Earlier this month, the Biden administration lifted the three-and-a-half-decade-old ban on the sale of U.S. arms to the Republic of Cyprus. With the ban in place, America had tied one arm behind its back in the Eastern Mediterranean. The United States already arms Israel and Greece but, until now, had not extended a similar hand to Cyprus, a critical partner in deterring Russian and Turkish aggression.

The increasingly contested region hosts massive offshore energy discoveries and sits at the intersection of the chaotic European, Middle Eastern and African theaters. With the Biden administration making the important decision to remove the arms ban for one year, Washington can bolster this vital region’s stability by providing the Republic of Cyprus with much-needed American-made arms.

Congress restricted the sale of U.S. arms to Cyprus in 1987, hoping it would incentivize a diplomatic settlement to the island’s frozen conflict. Yet, Cyprus remains divided still. All that the arms ban accomplished was to push the Republic of Cyprus toward Russia while undermining its ability to promote stability in the Eastern Mediterranean. Last year, President Biden renewed a one-year limited waiver that President Trump first issued to allow the sale of non-lethal defense articles to Cyprus, a recognition both of Cyprus’s importance and the arms ban’s deleteriousness to U.S. interests.

As the region becomes increasingly contested because of offshore natural gas discoveries and as an epicenter of global strategic competition, Cyprus is an important U.S. partner against Russia’s growing aggression and Turkey’s unreliable foreign policy. With America’s European partners looking to decrease their reliance on Russian energy, the development of natural gas routes through the Mediterranean is increasingly important.

However, Turkish belligerency hinders the growth of commercial and energy projects in the region. In June, Cyprus lodged a complaint at the United Nations that Turkey was attempting to take full control of Northern Cyprus. Tensions between Athens and Ankara have escalated in recent weeks with both sides accusing each other of violating their airspace and Turkish President Recep Tayyip Erdogan issuing not-so-veiled threats to attack Greece.

Acknowledging the need to move past policies from the 1980s but that Cyprus’s close ties with Russia are a significant obstacle to lifting the arms ban, the FY2020 National Defense Authorization Act (NDAA) charted a course for resuming weapons sales, if Nicosia decreased its ties with Moscow. Specifically, the law requires Cyprus to cooperate on anti-money laundering efforts and block Russian naval vessels from accessing its ports as conditions for lifting the U.S. arms sale ban.

Cyprus has now fulfilled both obligations. In recognition, Secretary of State Antony Blinken wisely made the decision to lift the arms ban for one year as allowed by law pending another determination that Cyprus is abiding by those conditions. The arms ban should remain lifted so long as Cyprus continues its anti-money laundering cooperation and restricts access to Russian naval vessels.

After pressure from the United States and European Union, Cyprus took substantive anti-money laundering measures, including ending its “Golden Visa” program in November 2020 and complying with EU regulations against terror financing.

Over the past few years, Russian ships have visited Cypriot ports numerous times, and Cypriot officials had previously stressed the need to have good relations with Moscow. Russian vessels berthed at Cypriot ports at least eight times between January 2021 and November 2021.

Since Putin’s unprovoked invasion of Ukraine on Feb. 24, Cyprus has changed its tune about engagement with the Russian military. In March, Cyprus suspended Russia’s usage of Cypriot ports. It canceled the five Russian port calls previously scheduled for this year and denied it access at least once. No Russian vessel has visited a Cypriot port since November 2021.

Nicosia’s decision to cancel Russian visits to its ports at least temporarily satisfies the conditions for ending the prohibition on U.S. arms sales to Cyprus. At the same time, it is not clear whether Cyprus will approve Russian naval visits to its ports if the war in Ukraine ends. If Cyprus repeatedly remains in compliance, Congress should consider removing the ban permanently. The Republican case for a Temporary Family Visitation Visa Alaska’s ‘Willow Project’ is essential to our Iñupiat sustainability.

The Biden administration took a first step toward strengthening stability in the Eastern Mediterranean by reversing the failed ban on U.S. weapons sales to Cyprus. Ending the arms ban alone, however, is not enough to create positive developments. Now, the United States can fully engage in the region by bolstering its partner’s security with much-needed arms.