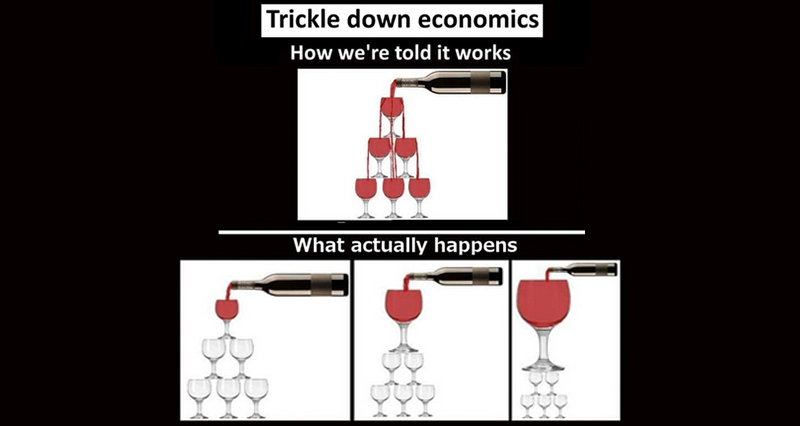 The UK government’s economic policies under new PM Liz Truss have caused a stir among not only leftists, but also among mainstream economists. The new government says the solution to the stagnation and failure of British capitalist production is to cut taxation on the rich and on big business. The extra income flowing to them will then be available to boost investment and spending that can deliver economic growth.

This is a reversion to a very old idea in neoclassical economics: trickle-down economics. The term “trickle-down” originated as a joke by humorist Will Rogers which he used to criticize economic policies that favoured the wealthy or privileged while being framed as good for the average citizen.

Trickle-down economics is often seen as part of what economists call ‘supply-side economic policies’ which argue that it is failures in production, not demand that is the problem for capitalist production. What the supply-side boys and girls want is a ‘flexible’ labour force and higher productivity from more investment; not macro demand management that Keynesians claim is the answer.

In particular, trickle-down theory more specifically advocates for a lower tax burden on the upper end of the economic spectrum in order to boost incomes for those who will save and invest more. That’s just talk for raising profits for business to the detriment of wages in order to encourage investment. Increased income and profit for the rich will eventually trickle down to the rest of us when the rich spend their money or invest in their businesses.

Leading mainstream supply-side economists like Thomas Sowell reject ‘trickle down’ as part of supply-side theory or policy. Sowell: “Let’s do something completely unexpected: Let’s stop and think. Why would anyone advocate that we “give” something to A in hopes that it would trickle down to B? Why in the world would any sane person not give it to B and cut out the middleman? But all this is moot, because there was no trickle-down theory about giving something to anybody in the first place.”

The theory is really an economic child of the extreme right-wing philosophy of Ayn Rand, the American who reckoned that the rich should rule without restriction, the gormless masses should follow them and that greed is good. Indeed, this philosophy permeates British PM’s new economic advisors. One such is Matthew Sinclair, formerly chief executive of the right-wing misnamed Taxpayers’ Alliance. This is funded by unknown foreign donors. Sinclair wrote a book called Let Them Eat Carbon, arguing against action to prevent climate breakdown. He claimed that: “Equatorial regions might suffer, but it is entirely possible that this will be balanced out by areas like Greenland.” So that’s all right then; as those in the Global North will be fine, even if billions of poor people in the Global South fry or drown.

However, the theory that cutting income taxes will raise revenue often gains support from the liberal mainstream. John F. Kennedy argued that tax rates can be so high that they can have an adverse effect on the economy. In a 1962 address to Congress, John F. Kennedy said, “it is a paradoxical truth that tax rates are too high today and tax revenues are too low and the soundest way to raise the revenues in the long run is to cut the rates now.” And John Maynard Keynes said, back in 1933, that “taxation may be so high as to defeat its object,” that in the long run, a reduction of the tax rate “will run a better chance, than an increase, of balancing the budget.”

But is it true that cutting taxes could actually raise government revenue rather than reduce it? You can see the theory. The right-wing ‘trickle down’ advocates reckon that lower taxes for the rich will bring more investment and spending and so more jobs and income for all ie supply-led growth. The liberal advocates reckon that cutting taxes (for all) will mean ‘middling up’ as average incomes will rise and there will be more spending. This extra demand will lead to businesses expanding: ie demand-led growth.

But what is the empirical support for ‘trickle down’ or even ‘middling up’? The leading economic advocate of the theory that cutting taxes will lead to more growth and thus more, not less, government revenue was Arthur Laffer. But even he thought that was true only if tax rates were above 50%. Others reckoned it would be more like 70%.

Actually, in the 1950s, personal income tax rates reached 80-90% at the top rate. This did not seem to affect the fastest growth rates in capitalist economic history in North America and Europe then. Yet the new British government now claims that cutting the already low top rate from 45% to 40% will boost growth and revenues.

The empirical evidence is just not there for the ‘trickle -down theory or the Laffer curve. Analysis published in 2012 by the Congressional Research Service found that reductions in top tax rates were not correlated with economic growth Instead they were much more associated with rising income inequality. A 2012 study by the Tax Justice Network indicates that wealth of the super-rich does not trickle down to improve the economy, but it instead tends to be amassed and sheltered in tax havens with a negative effect on the tax bases of the home economy. A 2015 paper by researchers for the International Monetary Fund argued that there was no trickle-down effect as the rich get richer: “[I]f the income share of the top 20 percent (the rich) increases, then GDP growth actually declines over the medium term, suggesting that the benefits do not trickle down. In contrast, an increase in the income share of the bottom 20 percent (the poor) is associated with higher GDP growth.”

A 2019 study in the Journal of Political Economy found contrary to the claims of trickle-down theory that “the positive relationship between tax cuts and employment growth is largely driven by tax cuts for lower-income groups and that the effect of tax cuts for the top 10 percent on employment growth is small.” Finally, a 2020 working paper by London School of Economics and Political Science researchers compared the results of countries that passed tax cuts in a specific year with those that did not, over a five decade period from 1965 to 2015 in the 18 member countries of the Organisation for Economic Co-operation and Development. It found that contrary to the claims of trickle-down theory, tax cuts for the rich had no “significant effect on employment or economic growth”. They found no evidence that the cuts induced “labour supply responses” from high-income individuals (i.e. “lead to more hours of work, more effort, etc.“) that boosted economic activity. On the other hand, they did find evidence of a “sizable” increase in income inequality. “Major tax cuts for the rich increase the top 1% share of pre-tax national income in the years following the reform. The magnitude of the effect is sizeable; on average, each major reform leads to a rise in top 1% share of pre-tax national income of 0.8 percentage points.” Indeed, it was under PM Liz Truss’ hero, Margaret Thatcher from 1979-90 that inequality of income rose the most as she cut personal and corporate taxes.

These tax cuts did not produce faster growth than in the golden age period of 1948-64 when these tax rates were high; and ironically, the tax burden as a % of GDP did not fall either because GDP did not rise enough to surpass increased revenues from other taxes.

In my view, it is obvious that just cutting personal income tax or even corporate profit tax will have little effect on economic growth. What matters for growth is increased productivity of labour and that depends on increased investment in technology. That in turn under capitalism depends on rising profits and profitability. If they are falling or low, then even large adjustments in income tax will have limited effect compared to changes in overall profitability. And remember the bulk of tax revenues no longer comes from personal or corporate taxes, but from sales or value-added taxes, customs duties, social security deductions and so-called stealth taxes.

The IMF has argued that “increasing the income share of the poor and the middle class actually increases growth” and that “to tackle inequality …policies should focus on raising human capital and skills and making tax systems more progressive…” Here the IMF is half right and half wrong. Reduced taxation on working people might marginally reduce inequality of income but economic growth depends not on rising household incomes or spending but on profits and investment. The cause and effect is, from profits to investment and growth; not from spending to profits and growth. Trickle-down or middle-up? Neither can change much when it comes to economic growth.

This article was previously published on his website and can be read here.