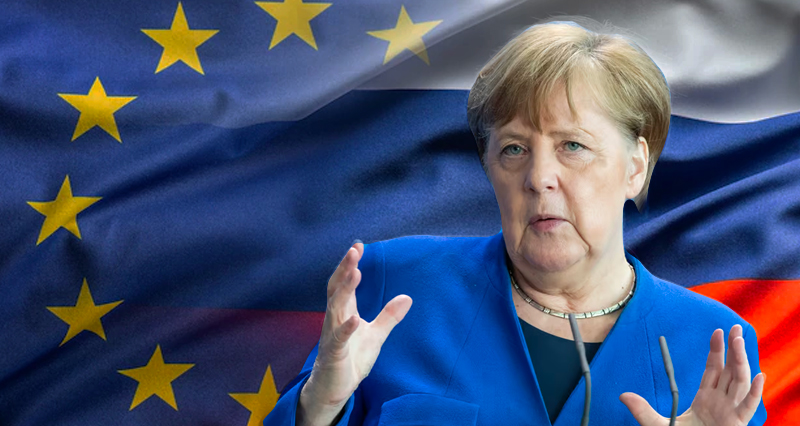 Former German Chancellor Angela Merkel’s policy of ‘assuring Europe’s security together with Russia’ is a continuation of the state tradition identified with chancellors such as Helmut Schmidt, Gerhard Schröder and Helmut Kohl.

An intense Transatlantic offensive has been launched against Russia, which has stopped NATO’s eastward expansion in Ukraine. Former German Chancellor Angela Merkel, who for a while did not comment on the position of Europe and Germany following the attack by US President Joe Biden, recently made a series of statements. Merkel, who chaired the Chancellery for 16 years between 2005 and 2021, consistently defended the stance that “Europe’s security is ensured together with Russia”. Merkel’s statements were widely covered in the press, and a large part of them were criticised. Media outlets fervently supporting sanctions against Russia claimed that Merkel had angered the public and caused tension. However, the fact is that German and European public opinion has shifted to the view that “Russia is a reality, we have to live with it”.

Merkel’s speech was reported as follows on October 1 in the Merkur.de news portal and Kölner Stadtanzeiger:

“Merkel left office at the end of 2021 after 16 years as Chancellor. Since then, she has rarely appeared in public. The former Chancellor attracted a lot of attention when she dared to speak publicly again. The public paid special attention when she spoke about the political situation in Germany and Europe.”

On Thursday, September 29, Merkel was a guest at a ceremony in Lower Saxony to commemorate the “1100th anniversary of Goslar”. At the event, where she was invited to honour the hometown of her former deputy Sigmar Gabriel (SPD), she focused on current developments in Ukraine. Merkel also spoke about Russia and President Vladimir Putin. According to the overall assessment, she caused a stir with her remarks on the same topic for the second time in a week.

At the event Merkel called for a European security system “including Russia”, just as she has stated at every opportunity during her tenure as Chancellor. While in office, Merkel advocated for reforms in NATO as well as for European politics and security policies independent of the Atlantic.

In Goslar, the former chancellor made a prudent assessment at a time when opposition to the policy of “European security together with Russia” is prevalent: “Today, this goal may not seem as realistic, just as the reunification of Germany seemed unrealistic to Adenauer in Goslar in 1950. But you still have to try.” Criticism and attacks on the statements were not long in coming. Andriy Melnyk, Ukraine’s former ambassador to Germany, “thundered against the Chancellor”: “The former Chancellor’s obsession with Russia, a terrorist state, is astonishing. At a time when Putin has stolen 15% of Ukraine, Mrs. Merkel is boasting about ‘integrating Russia into the European security architecture’.” “This goes against Ukrainians,” Melnyk wrote on Twitter. Melnyk accused Merkel of “years of pro-Putin policies” that made the military invasion of Ukraine possible and denounced her statements as “shameless.” Asked about Putin’s statements, Merkel replied, “We must take his words serious.” Melnyk also harshly criticised these statements.

According to Focus Online, Merkel said “Russia’s aggression against its neighbouring country is the biggest violation of international law principles in Europe since the Second World War,” in February. Despite this, Merkel called for working on a pan-European security architecture “including Russia”. At the same time, this view is based on the geostrategic notion that “Russia belongs to Europe”.

According to anti-Russian media, “Vladimir Putin wants to formalise the annexations following the sham referendums held in Kherson, Donetsk, Luhansk and Zaporizhia. After the annexation of Crimea in 2014, this would amount to an illegal expansion of territory at the expense of Ukraine.” The criticism against Merkel continues as follows: “With these developments Merkel’s dream of cooperation with Moscow on a ‘pan-European security architecture’ seems impossible.”

‘Europe’s security is possible together with Russia’

The German and European presses portray Merkel’s view as new and unconventional. However, Merkel has repeated this view at every occasion. She made one of these statements in Berlin on December 17, 2014 while she was in office: “Europe’s security cab only be possible with Russia,” she told Reuters.

“Europe’s goal remains a sovereign Ukraine capable of determining its own future,” Merkel said, referring to a government declaration she announced in the Bundestag: “It is clear that the ongoing conflict between the government in Kiev and pro-Russian separatists in eastern Ukraine cannot be resolved militarily. That is why Europe is seeking dialogue with Russia. The goal is a European security structure with Russia, not against Russia. The prerequisite for this, however, is that the power of the law prevails, not the law of the strongest. Therefore, there will be sanctions against Russia, but they are not a solution in themselves.”

‘You should take Putin’s words seriously’

“You have to take his words seriously,” Merkel said of Putin at one of her rare public meetings in Berlin. “Taking his words seriously, not just dismissing them as a bluff, but dealing with them seriously, is by no means a sign of weakness or appeasement. Political intelligence, an intelligence that helps to preserve room for maneuver, or at least to develop new ones, is needed.”

Merkel was referring to Putin’s statement that the “use of all possible means” (including nuclear weapons) in the face of a threat was in no way a “bluff”.

On the state-owned ARD television, Sandra Maischberger discussed Merkel’s statement of September 28. But military expert Florence Gaub was more relaxed about Putin’s threats: “The bomb is not a weapon, the fear of the bomb is a weapon.”

Merkel also spoke about Ukraine at a memorial event for former Chancellor Helmut Kohl. Merkel announced a position referring to Helmut Kohl and German state tradition: “If he was still alive as Chancellor, he would have said the unthinkable as he always does. He would have said, ‘Relations with Russia can be restored.’”

Multipolar world has become a reality

Angela Merkel’s policy of “achieving European security together with Russia” is a continuation of the state tradition identified with prime ministers such as Helmut Schmidt, Gerhard Schröder and Helmut Kohl. Helmut Schmidt led the policy of “European independence from the Atlantic” in 1974-1982 when he was prime minister. In his book “Powers of the Future” (Die Maechte der Zukunft), he has foreseen China’s current position and met with Chinese leaders several times. Schröder took a stand against the US invasion of Iraq in 2002 and maintained relations with Russia to this day. The German state tradition that continued with Merkel followed the policy of a European Army, a separate headquarters from NATO, a policy independent from the Atlantic, and developing relations with Russia and China in economic, political and cultural fields. During Merkel’s rule, Germany has always curbed US sanctions against Iran. She drew attention to the importance of dialogue with Türkiye.

With the Biden Administration, Germany and Europe have come under intense attack of Atlantic hegemonism. Defeated in the Second World War, Germany was reshaped by the US occupation. All the “deep relations” of that period were mobilized. A policy of strengthening Atlantic relations was pursued with a coalition under the de facto control of the US, particularly the Green Party. In this way, US hegemonism is trying to prevent its accelerating collapse by keeping Europe and especially Germany in control. But the multipolar world is now a reality and the dream of a unipolar world is fading. The multifaceted struggles that bring the old era to an end are advancing at a dizzying pace, with Türkiye at the forefront.