“US attacked Nord Stream, TurkStream likely to be next” 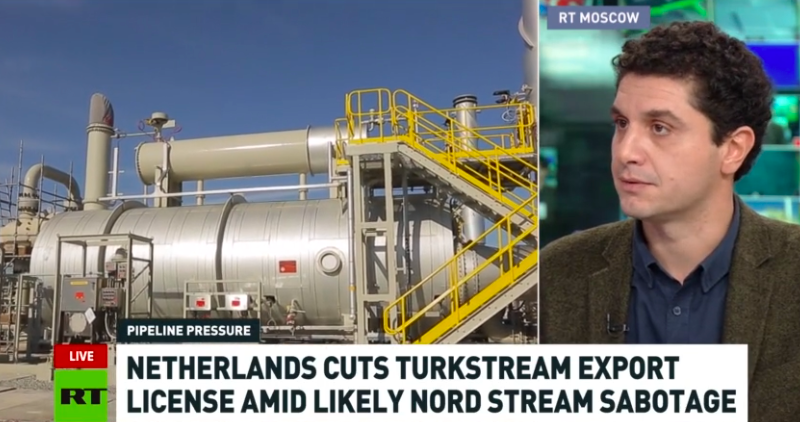 United World International expert Onur Sinan Guzaltan evaluated Turkish-Russian relations, the sabotage of the Nord Stream pipeline and the future of the war in Ukraine in a Russia Today broadcast.

Stating that the sabotage of the Nord Stream pipeline was organized by the USA, Guzaltan drew attention to the possibility of similar attempts of attack against the TurkStream in the coming days.

You can watch the full interview here.

RT: The Netherlands Central Import and Export Office has recalled its license from Gazprom-subsidiary company managing the TurkStream pipeline. What do you think are the reasons behind that move?

You suggest that some actors may be interested in jeopardising the Russian gas supply. What would be the reason for doing such a thing?

It all started with a letter from the US Treasury Department to the Turkish Industry and Business Association. They threatened them not to cooperate with Russia. Afterwards they threatened the Turkish banks too. That is why some Turkish banks stopped using the MIR payment system. And I think, the US now also wants to intervene in the energy field, since it is such a strategic sector. That’s why they are even targeting the gas fields and pipelines such as the NordStream and now the TurkStream. This is the plan of the US, and they are unfortunately using their European allies.

Interestingly whatever happened to the NordStream pipeline, right after that, Washington came and said „Do not worry Europe, we have got your back. We have got LNG which we can supply to you”. The timing of that is interesting at the very least. Can they cover what is coming from Russia to Europe?

I think that the US provoked the Ukrainian conflict. And their main purpose was to cut off the relations between Europe and Russia. But still, I think that Russia and Europe have trade relations. So that is why they are openly targeting these energy pipelines, to push Europe into making energy deals with the United States. This is the overall strategy of the US, and that’s why they attacked the NordStream. And their second target will probably be the TurkStream.

Where do you see the Turkish-Russian relations right now? For example, Türkiye might consider buying jets from Russia, if the US refuses to provide F-16s. This is a great statement of intent. What does that portray for Türkiye’s top defence agency that might be willing to do that?

The Turkish government follows a balance policy between the East and the West. And they have two main goals while following this policy. The first is to keep the distance between Türkiye and the West, because the Western powers, the US and many European countries, are supporting terrorist organizations that act against Turkish national sovereignty. And the second point is that the Turkish government wants to be a global pole. As a result, we as a member of NATO have good relations with Russia and Iran. And these countries were considered as enemies for NATO and the West. Therefore, I think this statement of the Turkish government regarding the fighter jets, is a result of the balance policy that Türkiye has been following for the last 10 years.

On the other side, there has been hesitancy towards doing business with Russian banks in Türkiye. Do you see that balance policy as a delicate game in which Türkiye seeks its own interests, or as a fear that Türkiye has that America may target it?

“Everybody in Türkiye knows that the US is not our partner”

And Türkiye is ready for any blowback from the US you think that might come from them?

The US has been supporting terrorist organizations against Türkiye for over 40 years. They are supporting the PKK, the YPG in Syria and the Gulenist terrorist organization whose leader is still living in Pennsylvania in the US. And they are also provoking the Greek side against Türkiye in the Aegean and the Mediterranean Seas. So everybody in Türkiye knows that the US is not our partner. And as I said, our business and economic infrastructure is still somewhat dependent on the US. That is why Türkiye is following this balance policy. But I believe that there will be a strong rupture between the US and Türkiye in the end. That is why, cooperation with Russia is really important for us.

“A war between Russia and the collective West”

NATO Secretary Jens Stoltenberg is going to hold a special media conference today. Do you see that as being related to the former Ukrainian territories the Republics of Donbass, Kherson and Zaporozhe to join Russia? Do you foresee this will be a major issue?

I think now the level of war has already changed. Now it is no longer a conflict between Russia and Ukraine, but a war between Russia and the collective West, as the Russian Defense Minister Sergei Shoigu said. We see the result with the American sabotage of NordStream pipeline. By the way, I see that as an American sabotage since Russia has no reason to sabotage its own pipeline. And I think in the coming days, the West would be more and more aggressive.

“NATO organizes military coups as well, like the coup attempt in Türkiye in 2016”

The reason I am mentioning NATO in particular, is that in its mission statement says that it is a defence bloc. So why would it be sharing its view on issues like referendums?

NATO has never been a defence bloc. NATO is like an organization that interferes in the international conflicts such as in Libya. What was NATO doing in Libya? So, NATO organises military coups as well, like the coup attempt in Türkiye in 2016. We know that NATO officials and also the US were behind this coup attempt in Türkiye. So, I know this is a paradox, Türkiye is a part of NATO, but also is targeted by NATO. That’s why I think that there will be a rupture between Türkiye and NATO. And about the referendums in Donbass and other regions; I think they wanted to express their views because there are some elements in NATO that wish a direct war between Russia and the West. That is why they are probably preparing for new kinds of provocations against Russia.