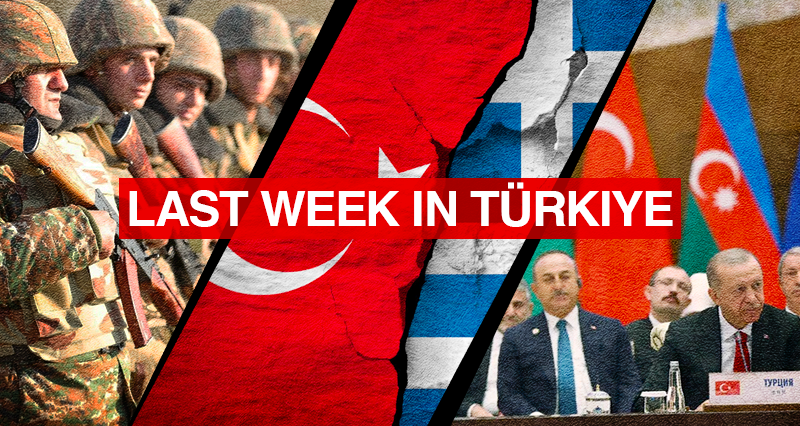 The public agenda in Türkiye was busy with three main topics last week.

First was the attendance of the Turkish President Recep Tayyip Erdogan to the Shanghai Cooperation Organization Summit held in Samarkand, Uzbekistan.

Second were the reactions to Greek Prime Minister Kyriakos Mitsotakis’ statements against Türkiye at the UN General Assembly.

The third topic was the Türkiye’s resentment over the Armenian provocations on the Azerbaijan border, which resulted in nearly 300 dead.

Türkiye’s attendance to the SCO Summit in Samarkand

Turkish President Recep Tayyip Erdogan has paid a visit to Samarkand, Uzbekistan, to attend the two-day international summit and hold one-on-one meetings with the SCO leaders.

Erdoğan attended a sapling planting with leaders of countries attending the Shanghai Cooperation Organization (SCO) summit and a tour of newly built areas of the city, after visiting the historic Hazrat Khizr Mosque and Tomb.

Erdogan attended the 22nd Meeting of the Council of Heads of State of the SCO as a special guest, and Türkiye participated at presidential level for the first time since Ankara obtained the SCO dialogue partner status in 2012.

Aside from Azerbaijan, the grouping’s dialogue partners include Cambodia, Nepal, Sri Lanka, and Armenia.

The schedules of the participating leaders were crammed with bilateral and multilateral meetings on the sidelines of the ongoing summit. However, the focus of this year’s two-day SCO summit was on a sideline meeting between Xi and Putin, who met for the first time since Beijing Olympics held early this year in February.

President Recep Tayyip Erdogan said Türkiye aims to become a full member of the Shanghai Cooperation Organization, noting that the group’s next meeting in India will be a venue to further discuss this issue.

“We are not a member of the SCO. The next process is a step toward the most advanced level of this work. This step, of course, will come to the agenda at a more advanced level in the talks in India, which will be the host of the upcoming period,” he told journalists on September 17th on his plane from Uzbekistan back to Türkiye.

Erdogan reminded that the organization was once called Shanghai Five, but now it has nine members, along with three observer members and nine dialogue partners, including Türkiye.

“Almost all the leaders I met thanked us for the role we played in reducing tensions, especially in the Russia-Ukraine War. They said, ‘We really appreciate and congratulate you for your role here,’” he said.

The world powers have no intention to make efforts for the solution of the Ukrainian crisis, Erdogan said and stressed that Türkiye has initiated this bid and kept a balanced policy between Ukraine and Russia.

Elaborating on the recent clashes between Armenia and Azerbaijan, Erdogan cited Baku, stating it had “completed the operation it started in return for Armenia’s provocations.”

Referring to his meeting with Azerbaijani President Ilham Aliyev, Erdogan said Baku is of the opinion that it has ensured the security of Azeris after the last confrontation.

“It is important here that Armenia abandons its provocations against Azerbaijan and focuses on peace and cooperation as soon as possible by acting in accordance with its previous commitments,” Erdogan stated.

Türkiye’s wish is to successfully conclude the normalization processes carried out in the region and to ensure regional peace and stability permanently, he added.

Lastly, Erdogan said Türkiye and Russia had reached a deal resolving a dispute over the Akkuyu Nuclear Power Plant, reinstating a Turkish contractor instead.

Türkiye on last Friday criticized Greek Prime Minister Kyriakos Mitsotakis for his remarks against Ankara at the UN General Assembly.

“Unfortunately, this statement was yet another example of distortion of facts and hostile narrative against Türkiye. Türkiye’s role in its region and beyond is well appreciated by the international community,” the Turkish delegation said.

It came after the Greek premier on Friday told the UN General Assembly in New York that Türkiye “continues to play a destabilizing role in the Eastern Mediterranean, the Middle East, and the Caucasus.”

The delegation also said Türkiye does not challenge the territorial integrity or unity of Greece, calling it a “a false propaganda.”

“However, Türkiye does challenge Greece to enter into an honest and meaningful dialogue in accordance with international law to address not one but all legally interrelated Aegean disputes.”

At a press conference as part of the Thessaloniki International Fair, Mitsotakis said that he remained open to a meeting with Erdogan but that he could not force one. “I consider recent statements by the Turkish president unacceptable. However, we will always try to keep communication channels open,” the Greek premier said.

He added that an informal EU summit early October in Prague might be a chance for this to happen.

Asked whether he thinks Türkiye is going to provoke a military conflict in the Aegean, the Greek prime minister answered that he could not “even imagine a military confrontation.” But he warned that in such a scenario Greece’s armed forces would give a “decisive answer.”

Turkish Foreign Minister Mevlut Cavusoglu has reiterated Türkiye’s warning toward Greece against further provocation in the eastern Mediterranean and Aegean.

“While we try to respect our neighbourly rights on both sides of the Aegean, Greece still continues its provocations. If you embark on an adventure on behalf of others, you will suffer the consequences today as you did in the past. This is a warning to our neighbour, Greece,” the minister said on September 12th, at a symposium on the Battle of Sakarya.

Cavusoglu called on Greece not to be a “tool” of others and end its provocations.

“Don’t be someone else’s tool. Do not continue the provocations because Türkiye’s friendship is ancient and its hostility is grave. Keep that in mind,” he said.

The Turkish Defense Ministry on the other hand, said the Greek warplanes scrambled to harass the Turkish F-16s on August 22nd and 24th by locking their radars on to them. The incidents took place while the Turkish jets were escorting the American warplanes and other allied airplanes on these dates, the ministry cited.

Despite Türkiye’s efforts to ease tension in the region, Greece continues with its “provocative actions,” Turkish National Defense Minister Hulusi Akar has said, calling out Athens for “two-faced” diplomacy.

“Despite all our well-intentioned efforts, unfortunately, our neighbor Greece continues to increase the tension with some provocative actions and rhetoric every time. We do our best to prevent this,” Akar told reporters in the capital Ankara on Monday.

“Right after this (incident), the politicians in Greece accused Türkiye of aggression. What is this, if not hypocrisy? That’s why we ask that don’t they have a mirror in their house? If they look in the mirror, they will see the truth, and maybe they will be ashamed,” Akar said.

Akar also reiterated his call to meet around a table to address the bilateral issues, adding: “We say: ‘Come whenever you want, or let us come.’ We call for dialogue, and they leave these aside and say: ‘Türkiye is expansionist and aggressive.’ They are the ones who both fired on the ship, and who didn’t come to the dialogue.”

Akar added that Türkiye is determined to protect the rights and interests of both the country and Turkish Cypriots in the Aegean, the Eastern Mediterranean, and on Cyprus island.

Upon a question on the Lavrion camp in Greece, Akar said: “They are hiding FETO, PKK/YPG, Daesh, DHKP-C terrorists in Lavrion, they are hosting them. They make them go to various countries. While all this is seen, they claim that there is no such thing, with great negligence, hypocrisy. It is impossible to understand this.”

The Turkish Foreign Ministry has also reacted against the Greek campaign “Asia Minor Catastrophe,” calling on Athens to avoid “distorting” the history.

“We observe that Greek authorities are trying to conceal the defeat of the Greek invasion army after its adventurous military campaign in Anatolia a century ago by covering up the barbaric crimes it committed against humanity, misleading its own public opinion through distortion of the historical facts, and the international community with lies, by means of unrealistic, irrational statements and activities regarding the so-called ‘Asia Minor Catastrophe,’” the ministry said in a statement.

Lastly, the Turkish Foreign Minister Mevlut Cavusoglu called on the Organization of Islamic Cooperation (OIC) to lend support to the Turkish Cypriots in the face of international embargoes.

“Turkish Cypriots face unfair isolation and embargo. We expect the OIC member states to stand together with the Turkish Cypriots,” Cavusoglu said in his address at the OIC’s annual coordination meeting in New York.

Cavusoglu stated that important results could only be achieved when the Muslim world acts in solidarity.

Türkiye’s reactions over Armenian provocations on the Azerbaijan border

The Armenian army carried out extensive provocations on the border towards the cities of Dashkesan, Kalbajar and Lachin, according to Azerbaijan’s Defense Ministry.

Armenian army saboteurs laid mines on land and roads between positions of the Azerbaijani army in various directions, the ministry said, adding that when the Azerbaijani military took steps to address the situation, intense clashes broke out between troops of the two countries.

There were casualties among military personnel from both sides, it added.

Turkish Foreign Minister Cavusoglu said Armenia should stop its provocations along the border with Azerbaijan and instead make peace.

In the wake of Azerbaijan’s response to these provocations, “Armenia needs to learn its lesson and seek peace,” said Mevlut Cavusoglu.

Speaking at an event, Cavusoglu cited the promise of Azerbaijan’s comprehensive peace proposal, while “Armenia, on the other hand, burned and destroyed everything while withdrawing from Lachin,” a strategic city recently returned to Azerbaijan.

“They laid mines everywhere and pursued evil” he said.

Even though Türkiye and Armenia last year appointed envoys to normalize ties, Cavusoglu said, “Both the world and Armenia knows that this normalization process will not proceed independently of Azerbaijan. For full stability and peace in the region, the problems between all countries must be resolved.”

“We always stand on the side with dear Azerbaijan. Azerbaijan never stands alone,” he added.

The Turkish President Erdogan on the other hand, stated that Armenia’s recent violations of a 2020 peace deal, resulting in new border tensions with Azerbaijan, are “unacceptable”, reiterating Ankara’s support for Azerbaijan.

Speaking to the public in the capital Ankara, Recep Tayyip Erdogan said Türkiye sees the latest border tension as the result of Armenia’s violation of the November 2020 deal ending the Karabakh war that resulted in the victory of Azerbaijan, adding that he finds it “unacceptable.”

Erdogan also reiterated Türkiye’s support for Azerbaijan, saying that the world should know that Türkiye stands by its Azerbaijani brothers and sisters.

Türkiye hopes Armenia will step back from its current mistaken path to instead work for peace, he said, adding that Armenia will face “consequences” for its “aggressive attitude” and violating the agreement.

Lastly, the US House of Representatives Speaker Nancy Pelosi visited Armenia over the weekend for a show of the US support for the country after recent clashes between Azerbaijani and Armenian forces.

And on September 19th, the Vice President Fuat Oktay said that the US House Speaker Nancy Pelosi’s “biased” statements regarding the clashes between Armenia and Azerbaijan “sabotage diplomacy efforts” and was unacceptable.

“The statements made by the Speaker of the US House of Representatives, Nancy Pelosi, during her visit to Armenia, which are incompatible with historical and current facts, completely devoid of goodwill, reflecting a biased point of view and sabotaging diplomatic efforts, are never acceptable,” Oktay tweeted.

The White House administration should clarify whether the discourses of Pelosi and a few “lobby-supported politicians with her, who are clearly winking at the votes” of the Armenian diaspora, on the Karabakh issue reflect the official view of the US, he stated.

Oktay invited all international actors to act in a fair, prudent and responsible manner “at a time when lasting peace and stability in the region is sorely needed.”