Mounting tension between Türkiye and Greece 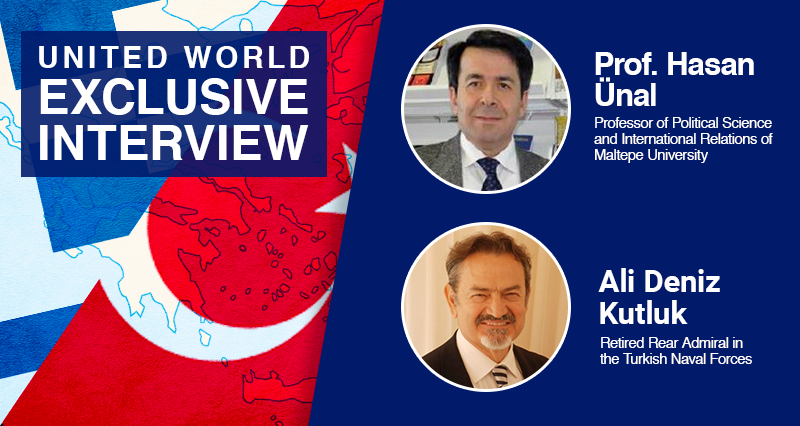 Two Greek coast guard boats opened harassment fire on a cargo ship in international waters in the Aegean some 18 kilometers (11 miles) off Türkiye’s southwestern coast of Bozcaada on September 10. Tensions between Ankara and Athens have mounted in recent weeks, sparking international concern. While the two neighbours’ problems in the Aegean and eastern Mediterranean have a long history, recently there is increasing talk of an open conflict.

We interviewed Ali Deniz Kutluk, retired Rear Admiral in the Turkish Naval Forces, who has held senior positions in NATO for many years; and Hasan Ünal, Maltepe University Professor for political sciences and international relations.

What is the reason for the escalating tensions between Greece and Türkiye, especially in the last two weeks?

We can only comment on this in a speculative way.

First, elections are approaching in Greece. Parties and leaders in Greece like to play the “Türkiye trump card” in elections, because those who are hostile to Türkiye get more votes. The Greek public is bred with Turcophobia; schoolbooks are still full of it. They call the date of 1919, when they launched their attack on Türkiye, the “Asia Minor Disaster” and try to exonerate themselves.

The second reason is the following. The Greek Prime Minister made a speech at the US Congress. Subsequently, an amendment was passed by the Congress to give F-16s to Türkiye. According to this amendment, when the F-16s are sold and modernized, the President of the US must assure the Congress that Greek airspace is not violated by Türkiye. Therefore, Greece seems to have such an aim: By provocations, Greece wants Türkiye to be forced to respond, so that the US Congress will suspend the sale of F-16s to Türkiye.

The US impact on Greece’s foreign policy: How much?

It is well known that there is a considerable US military presence and influence in Greece. To what extent does this have an impact on Greece’s foreign policy?

In this period, a Turkish-Greek conflict should not be in the interest of the U.S. The U.S. played a role in triggering the war in Ukraine. The aim was to achieve consolidation within NATO, to restart NATO armaments and to enrich its own companies selling arms to NATO. From this point of view, a confrontation between two NATO countries, Greece and Türkiye, could lead to a loss of the gains that the US has made through the war in Ukraine. So if you ask me, whether the US is behind these provocations, I think it is not, on the contrary, it is trying to appease.

Sure, some people in the US Congress are of Greek origin or receive electoral aid from Greece. They may have different views, but we can suggest that most of the 4-5 centres that guide US foreign policy are in favour of appeasement, not provocation.

As for the US military presence in Greece, I think those who associate it with the recent provocations by Greece are mistaken. The presence of ground forces in Alexandroupoli is related to the periodic (4 months or 6 months) relocation of the US ground forces in Romania and Bulgaria. Does the military presence in Alexandroupoli pose a threat to Türkiye? No, it does not. Even so, it is highly unlikely that these troops would join the war on Greece’s side.

The US’ military presence in Greece

The US air force in Greece is for the projection of power in the Eastern Mediterranean, the Black Sea and Africa, and has nothing directly to do with Türkiye. This projection of power is aimed at protecting the US interests of what they call “rule-based international order”. The US feels that it has lost the gains it made after the Second World War and wants to regain them. The US is also in search of an alternative base to the Incirlik base in Türkiye as a preparation for the scenario where things go wrong. So far, the US has used the Aviana Base in Italy for its regional purposes. But now there are more conflicts in the world. There is a crisis in the Eastern Mediterranean and Libya; the military campaign in Syria has gone astray, the need for surveillance support to Ukraine through the Black Sea has emerged. For these reasons, the US has reoriented its air forces. There are also reports that the US will deploy an aircraft carrier group to the region.

A coalition against Türkiye?

In the Eastern Mediterranean, the US, Israel, France, Greece and the Greek Administration of Southern Cyprus conducted joint military exercises. But, Türkiye has no partners or allies in such exercises. In this respect, does Türkiye seem vulnerable?

These countries are united by a common interest. They focus on the oil deposits in the Eastern Mediterranean. As a result of Russia’s decision not to make its hydrocarbon deposits accessible to Europe, the rapid transportation of the gas extracted and to be extracted from the Eastern Mediterranean to Europe came up. It is thought that this can be transported to Europe through Türkiye, not Cyprus or Egypt. Therefore, the basis of the union of interests of these countries has weakened. The tide is turning in favour of Türkiye. As you may recall, during her visit to the Greek Cypriot Administration of Southern Cyprus, Victoria Nuland, US Undersecretary of State told the Greeks that the issue of gas transportation to Europe could be discussed with the Turkish side.

Given these circumstances, even if some have hostile intentions against Türkiye, they do not have the power or the means to enforce them.

Türkiye and Greece: A century ago and today

Turkish officials often refer to the Turkish War of Independence when addressing Greece regarding tensions in the Eastern Mediterranean. Most recently, President Erdoğan called on Greece to “remember Izmir” (pointing to the Turkish army’s expulsion of the Greek army from Anatolia). Are there similarities between then and now?

Of course, there are many differences between the time of the War of Independence and today, but the similarities are that the world was unipolar then, centered on Britain, and it is unipolar today, centered on the US. In the War of Independence, Britain provoked Greece to attack Türkiye by providing weapons and equipment, and even, in the words of then Prime Minister Venizelos, “begged for an attack”. Today, if the US provokes Greece to attack Türkiye or if they take steps against Türkiye’s vital interests (such as declaring 12-mile territorial waters in the Aegean), Greece will face the same fate as in the War of Independence. Greece lost 150 thousand people in the Battle of Dumlupinar. It seems that the Turkish officials are sending a message to Greece that “you will suffer heavy losses”. Among them, we should assume that Greece will lose the islands in the Aegean near Türkiye.

Let us repeat that we do not want war. But actions against Türkiye’s vital interests make war inevitable, and in that case it makes no difference whether Greece is a member of NATO or whether Washington, Paris or London is behind it.

‘It is imperative to formulate a new policy on Greece’

The US lifting the arms embargoes on the Greek Administration of Southern Cyprus and the arming of Greece by the US and France show that it is imperative that we formulate a new Greece policy.

Both during the Cold War and the unipolar world, Türkiye has always kept Greece on the radar and from time to time resorted to crisis management (1997-1999 Kardak Crisis and S-300 crisis) to get results.

What are ist the EU’s effect on Türkiye’s foreign policy?

Since the second half of the 1990s, when the topic of EU membership began to pervade our entire foreign policy in a negative way, we have suffered significant deviations. During this period, which lasted until 2015 and even until the 2017 Crans Montana negotiations, our foreign policy lost its content and purpose.

For example, on the Cyprus issue, policies expressed in ridiculous phrases such as “negotiations out of spite”, “solution out of spite”, -as if the US will see that the Greek/Rum side does not want a solution and will act accordingly if we do not leave the table- have failed. In the same period, messages were given to the other party/parties as if we were ready to give up all our rights and interests in the Aegean rendered our Aegean and Cyprus policies pointless. In those years, I was having difficulty explaining to my foreign interlocutors what our theses are.

Prior to the EU membership issue, Türkiye had always succeeded in repelling the Greek/Greek attempts to militarize the problems in both the Aegean and Cyprus with counter moves. The Kardak Crisis and the S-300 crises are the best examples of these.

What can and should Türkiye do?

It is accurate to report Greek/Rum attempts to militarize the Aegean/Cyprus by making a complaint to NATO/UN, but not to expect great outcomes. Our initiatives regarding the militarisation of islands with non-military status are also in place.

It may be necessary to respond in kind to Greece’s provocations in the Aegean, by deploying the combat-ready S400s to the Aegean for drills from time to time, while accelerating efforts to establish air/sea bases by concluding defence agreements with the Turkish Republic of Northern Cyprus (TRNC).

In the meantime, if we need airplanes, it might be a good idea to negotiate with Russia and China on the one hand, and France/UK on the other, until we build our own airplanes. It would have political benefits, and would not appear dependent only on the US.

How do you evaluate Turkish-Russian relations in that context?

It is necessary to use the opportunities created by both the aircraft purchase and the joint production (S-400 and S-500), as well as the already hostile relations between Russia and Greece for the recognition of the TRNC by Russia. At the beginning of the Ukraine war, it was perhaps appropriate to stay away from a compromise with Moscow on both Syria and the TRNC due to the propaganda that Russia will collapse, but circumstances have changed. Due to the changing circumstances, just as we are taking steps towards reconciliation with Syria despite the US and feel more comfortable with SCO membership (or even BRICS), we should also be comfortable with the Russia-TRNC negotiations.

Moreover, the fact that all this is the result of Greek/Rum attempts to militarize the problem would strengthen our hand. Russia would not want Cyprus to become an EU territory with a one-state settlement – perhaps even joining NATO – nor would it want Cyprus to be completely under US control by lifting the arms embargo. So the conditions are in our favour in this regard. Azerbaijan will take steps to recognise the TRNC after signing a peace treaty with Armenia.

Ultimately, Russia is the state that will push Armenia towards a peace with Azerbaijan, and in fact, we see that Moscow is doing this, no matter how slowly it progresses, and that Russia is not positioning itself against Türkiye and Azerbaijan by becoming a tool for Yerevan’s provocations.

We should certainly consider the options to use NATO to respond to Greek/Rum attempts to impose sanctions on Türkiye through the EU. We should not forget that NATO has become more important than the EU to the West in a multipolar world.