Ukraine calls for sanctions against Turkish banks and businesspeople 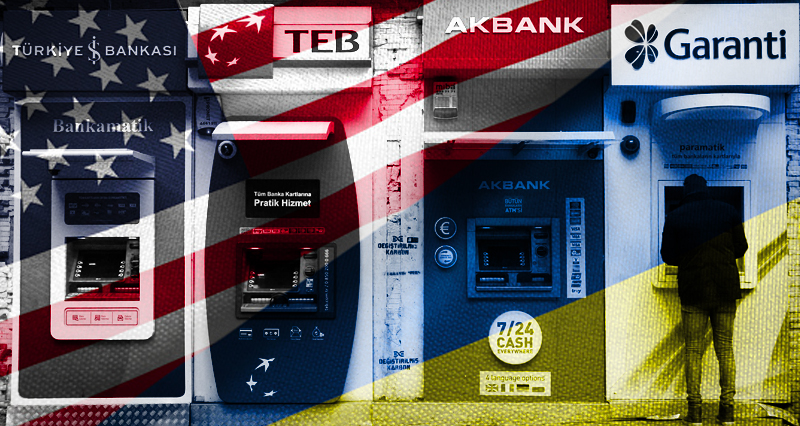 Recently, a website created by the Foreign Ministry of Ukraine (www.sanctions.nazk.gov.ua) revealed that sanctions were demanded upon the international community against Turkish state-owned and private-owned banks operating in Russia, their CEOs and other businesspeople. The website listed of the CEOs of Ziraat Bank, IsBank, Denizbank and Credit Europe Bank, alongside their mug shots and home addresses.

The US chooses, Kiev shoots

In these days when the Turkish banks are targeted economically, the Financial Times reported that the US and the EU have increased the pressures on Türkiye, over the sanctions imposed on Russia, right after the beginning of the conflict in Ukraine. The article, published by the Financial Times with contributions of two Western government officials, states that the US and EU were concerned that the banking sector in Türkiye would “become an area for illegitimate financial transactions” and open a channel through which Russia could pierce the economic sanctions.

Officials told the Financial Times that the US government is now focusing on the Turkish banks that are a part of the Russian Mir payment system, and that Brussels has established a special delegation to directly convey its concerns to the Turkish government officials.

Therefore, the Ukrainian Foreign Ministry here is shooting at the banking sector, exactly where the United States designated them to shoot.

Threats of sanctions by the US

Just before this, it was reported that the US Treasury Department has sent a letter of threat to the top organizations of the Turkish business world such as TUSIAD (Turkish Industry and Business Association), MUSIAD (Independent Industrialists and Businessmen Association) and TOBB (The Union of Chambers and Commodity Exchanges of Türkiye). Similarly, the most prominent media outlets in the US, such as the Washington Post and Financial Times have also campaigned for a similar mission and tried to threaten Türkiye with the sanctions stick.

Countries that do follow the US in the sanctions are suffering now worry: “How are we even going to survive this winter?”

The United States’ sanctions are not only aimed at destroying the Russian economy, but any economy of the country that rivals or opposes it.

In fact, it is not only the Turkish businesses that are on the Ukrainian Foreign Ministry’s website. There is a large list of countries and individuals that do any business with Russia, such as Azerbaijan. The whole world is pushed to obey to the aggressive policies of the United States, including in the economic areas.

As a result, a wider picture emerges: The US/Western sanctions are on one side, and the rest of the world is on the other side.

End of the delusion of the free market economy

On the other hand, the Ukrainian Foreign Ministry’s sanctions campaign website has also put an end to the delusion of the free market by the Atlantic system. The corporate monopolization by this liberalization had already eliminated the “freedom” of this so-called free market, but these unilateral sanctions have now officially ended it.

The US itself is seeking to get around these sanctions

When all this is happening, and when the US imposes its sanctions against Russia on everyone, the US itself is trying to develop ways to get around these same sanctions. While Europe sacrifices itself under an American dictate by cutting economic ties with Russia, the same US is also making attempts to maintain its trade with Russia behind the curtain. Press reported that they even wanted to use the Turkish companies as the intermediaries of this operation. However, Washington does not hesitate to immediately show the sanctions stick, when it is not the US itself doing the trade.

The US is known to keep exporting coal to Nazi Germany, which the US had officially went to war during the WW2, and it is also known that the US continued its trade with Iraq even when there was an embargo, through Jordan as an intermediate.

Kiev is not ruled by the Ukrainians

In addition to all these, the Ukrainian sanctions campaign against the Turkish banks, companies and businesspeople once again revealed Kiev’s true stance. The Bayraktar drones that were sent backfired as a call for sanctions.

It is also a fact that such moves are not rational for Ukraine either. This goes especially for moves directly targeting Türkiye.

Of course, lack of state traditions and being led by a president like Zelenskyy, were important factors in this.

But essentially, Kiev is not ruled by the Ukrainians themselves. In fact, it was this factor that played a role for this war to start in the first place. The US is even making Ukraine attack Türkiye, for its own interests and for the sake of the infamous sanctions stick.

Let us also note that the United States and Ukraine had reached an agreement to prevent the TurkStream pipeline to ever come into effect, long before this war. In this context, the hostilities actually date back to way earlier.

The hostilities must not go unanswered

The opportunities for Türkiye are endless. The conditions to become a center of finance, logistics, transportation, trade, tourism, and the provision of cheap energy sources, which are all the founding pillars of the international production revolution, cannot be more favorable for Türkiye. All that is needed is a strong will and a good management.

And the goal of course, should be to take solid steps. It does not have to be at a high tone. It can be done slow and steady. But a determined mindset is necessary. And it is also necessary to respond appropriately to this hostility done by the government of Ukraine.